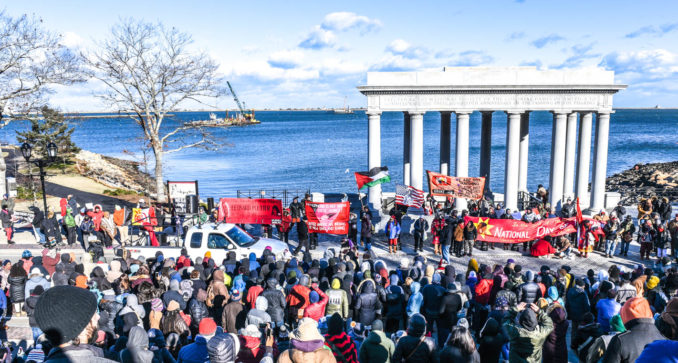 Indigenous people and supporters gathered despite sub-zero wind chills for the 49th National Day of Mourning at Plymouth, Mass. The undaunted crowd included Indigenous peoples whom the pilgrims menaced and murdered — Nipmuc; Mashpee, Aquinnah and other bands of the Wampanoag; Narragansett; Massachusett; Pequot and other Indigenous nations from the immediate region.

“The Pilgrims came here as part of a commercial venture. They didn’t need religious freedom — they already had that back in the Netherlands. The Mayflower Compact was merely a group of white men who wanted to ensure they would get a return on their investment. When they arrived … one of the first things the Pilgrims did was to rob Wampanoag graves at Corn Hill and steal as much of their winter provisions of corn and beans as they were able to carry.

“The first official thanksgiving did not take place in 1621 when the Pilgrims had a harvest-time meal provided largely by the Wampanoag. Instead it was officially proclaimed by Gov. Winthrop of the Massachusetts Bay Colony in 1637 to celebrate the massacre of over 700 Pequot men, women and children on the banks of the Mystic River in Connecticut.

“Gov. Winthrop wrote: ‘Those that escaped the fire were slain with the sword; some hewed to pieces, others run through with their rapiers … they thus destroyed about 400 at this time. It was a fearful sight to see them thus frying in the fire … horrible was the stink and scent thereof, but the victory seemed a sweet sacrifice, and they gave the prayers thereof to God, who had wrought so wonderfully for them.’

James continued, “And yet the history books call us the savages.”

James also discussed recent attacks on the Mashpee Wampanoag: “The Department of the Interior ruled that the Mashpee Wampanoag should not be able to take their own ancestral territory into trust. … [T]he Mashpee are threatened with having their very own land ripped away from them for a SECOND time. [It] represents an attack on the self-determination and sovereignty of all Native Nations throughout the country. … Stand With Mashpee and support pending legislation that would give Mashpee the right to petition for land to be taken into trust.”

UAINE co-leader Mahtowin Munro, Lakota, spoke of ongoing genocidal attacks, including the longtime kidnapping of Native children and placement in residential schools, foster care and adoption outside of their communities and the current attacks on the 1978 Indian Child Welfare Act. “ICWA was declared unconstitutional by a federal court in Texas. … Before that law was passed, about a third of Indigenous children were being removed from their families and adopted into white families.

“But now there are many forces, ranging from for-profit adoption placement agencies to religious fundamentalists to right-wing think tanks such as the Goldwater Institute, that want to return us to those destructive times. … [T]he media says that the separation of families by [Immigration and Customs Enforcement] is a new phenomenon … this is not something that just started with Trump or Obama. It has been happening for centuries to Black and Indigenous families.”

Munro also raised the struggle around Missing and Murdered Indigenous Women, Girls and Two Spirits (MMIWG2S): “Indigenous women and Two Spirits have been under attack since 1492. … One of the many reasons that Indigenous Nations all over are fighting against pipelines and fracking and mining is that man camps are set up for the workers. The men have huge sums of money and lots of drugs such as meth and heroin to entice Indigenous women, who often end up being addicted and trafficked. Some of these sisters disappear, some get killed.”

Attack on the environment

Munro and others speakers addressed the Indigenous struggles against fossil fuel pipelines and other corporate and governmental assaults on clean water, air and lands. Marjorie Flowers, Rigolet Inuk, a Labrador land protector who traveled from Labrador in the far north, raised the struggle against the Canadian plan to build the Muskrat Falls mega-hydrodam that will destroy lands and homes in Labrador and Newfoundland. Energy from this dam would run through the Maritimes, through precious forests in Maine, into the U.S. and Plymouth at the expense of Indigenous lives, culture and food.

Wampanoag elder Bert Waters, 88, read a statement from Native political prisoner Leonard Peltier and led the march through Plymouth. When the march arrived in front of the pebble called “plymouth rock,” the march paused to hear Juan Gonzalez, with a message from the Council of Maya Elders. June Sapiel and Dawn Neptune Adams (Penobscot) spoke about the battles against fossil fuel pipelines.

This writer (Tromblay, Huron/Metis non-status, undocumented Tsalagi heritage) spoke connecting the movement against violence toward women — “most sharply seen in the numbers of murdered and missing Indigenous women, girls and Two Spirits, and the lack of records thereof — which must acknowledge that this violence is part and parcel of the capitalist idea of ‘man over nature.’ … All the carbon in the atmosphere, the assault of fossil fuel pipelines on clear water and air, and the assault on the remaining undeveloped lands around the globe are a war on Mother Earth. Indigenous people are leading the fight to protect Mother Earth.”

As James said to the crowd on Cole’s Hill, “We will continue to gather on this hill until the U.S. military and corporations stop polluting the earth. Until we dismantle the brutal apparatus of mass incarceration. We will not stop until the oppression of our Two-Spirit siblings is a thing of the past.  When the homeless have homes.

“When people from Mexico, Central and South America are no longer demonized and targeted by politicians in search of a scapegoat. When the Palestinians reclaim the homeland and the autonomy Israel has denied them for the past 70 years. When no person goes hungry or is left to die because they have little or no access to quality health care.  When union busting is a thing of the past. Until then, the struggle will continue.”