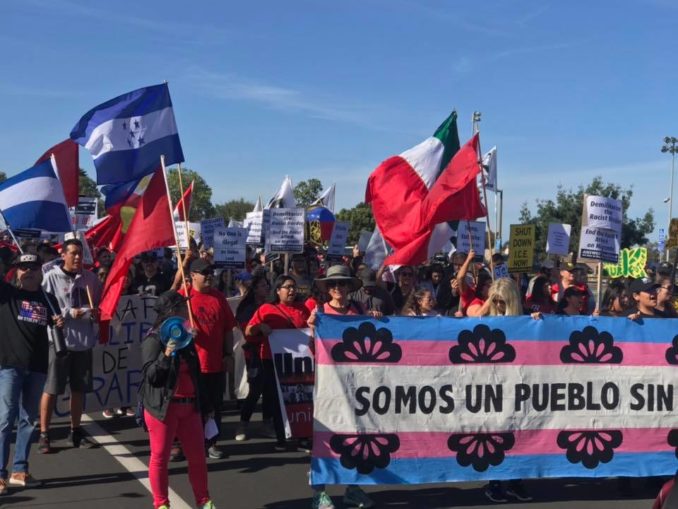 On the morning of Nov. 25, the San Diego Migrant and Refugee Solidarity Coalition held an International Day of Action in Solidarity with the Caravan and Exodus from Central America with the hundreds of migrants who have already reached the border at Tijuana, Baja California. Later in the day U.S. border police fired tear gas and rubber bullets at refugees trying to cross into the U.S.

The MRSC, a multiracial collective of grassroots and radical organizations, grew out of a coalition that has been protesting the Otay Mesa migrant detention center for many months. Union del Barrio offers key leadership to the coalition, which includes members of Colectivo Zapatista, Border Angels, American Indian Movement, Workers World Party, Party for Socialism and Liberation, Committee Against Police Brutality-San Diego, Palestinian Youth Movement and many other groups.

Concerned that groups from outside the San Diego area have “parachuted in” with little-to-no regard for local organizers, the MRSC issued a call focused on the needs and demands of people in San Diego and Tijuana. The group’s national call contained six demands: respect the right to asylum; process the asylum claims; acknowledge the role of U.S. intervention in Central America causing this exodus; increase international solidarity, including from the U.N. and Red Cross; release migrants in detention centers; and prosecute anyone who violates the human rights of asylum seekers.

About 500 activists gathered at Larsen Field, a local park near the U.S.-Mexico border. There a multinational group of speakers addressed the crowd. Chicanx activists expressed internationalist solidarity with Central American refugees. Members of the Palestinian Youth Movement expressed their solidarity and declared an end to all borders from Palestine to Mexico.

A moving appeal came from Mexican activists who have helped the migrants in their trek through Mexico. These leaders expressed their gratitude to the crowd for their support and dispelled myths that the people of Mexico opposed the migrants.

Following the Larsen Field rally, the crowd marched three-quarters of a mile east to the U.S.-Mexico border crossing. As hundreds of protesters walked down the Camino de la Plaza, the crowd grew and traffic stopped.

Despite the solidarity march disrupting traffic headed to the Las Americas Premium Outlets, a popular destination for tourists, San Diegans and Mexican nationals, pedestrians and drivers greeted it with curiosity and support.

Once the marchers reached the border crossing, speeches and chants resumed. In a volume surely loud enough to be heard across the wall in Tijuana, protestors chanted, “Let them in! Let them in!” “Hey, hey! Ho, ho! This borderwall has got to go!” and other messages of solidarity.

It became evident that the U.S. Customs and Border Patrol intended to ramp up their maneuvers even before skirmishes occurred on the Mexican side of the border. Twin CBP Blackhawk helicopters circulated above, and CBP agents patrolled Camino de la Plaza in Chevy Tahoe SUVs and even all-terrain vehicles.

The MRSC march was held in concert with an even larger action across the border in Tijuana. As many as 1,000 refugees and supporters marched there, demanding their asylum claims be respected.

Over the past month, the refugees had begun to arrive. Many of the earliest arrivals consisted of people of oppressed genders and sexualities who had faced state-sponsored repression and sexual assault in their home countries and later by Mexican authorities.

By many accounts, the Tijuana working class has been gracious in its reception of the Central American asylum seekers — just as many had earlier been for Haitian migrants to the city. However, reactionary forces have also mobilized in opposition.

Some have wondered whether the U.S. president’s approval of the use of force against the asylum seekers was mere hyperbole. Reports have noted that many of the troops deployed are unarmed and their numbers seemed to be decreasing. However, the CBP’s use of force this past Sunday underscores the seriousness of Trump’s words.

As a group of about 500 refugees and activists began to run toward the border crossing, in hopes of gaining entry and having their cases heard, the CBP fired tear gas and rubber bullets from the United States into Mexico at the asylum seekers, including children. There are reports that a young girl was seriously injured.

In their eagerness to repress, CBP agents were witnessed speeding down Camino de la Plaza so fast that they almost broadsided a car leaving the shopping center.

The Mexican Interior Ministry has said it would deport the people detained for rushing the border. The refugee conflict presents the incoming government of President Andrés Manuel López Obrador with a crisis, since most of Lopez’s voters are sympathetic with the refugees, while Washington will demand that he repress them.

The protests on both sides closed the border for five hours to pedestrians and autos, disrupting the regular flow of business. Las Americas Premium Outlets were also forced to shut down. While people on social media and at the border expressed concern over the delays, the general consensus was in support of the refugees, once people understood why.

Sunday, Nov. 25, signals a long struggle ahead for the migrants and their allies.