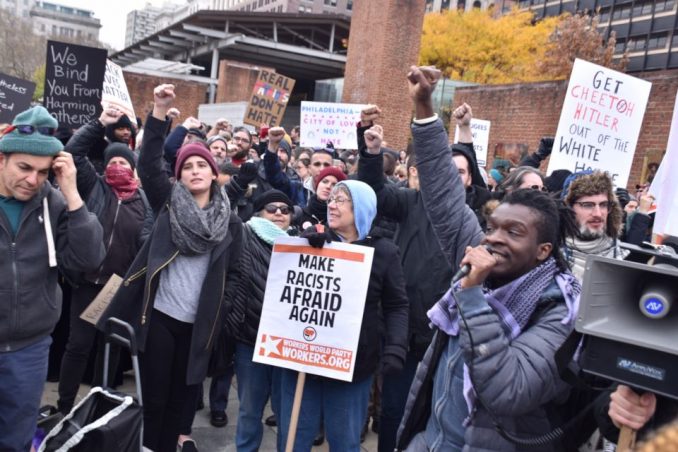 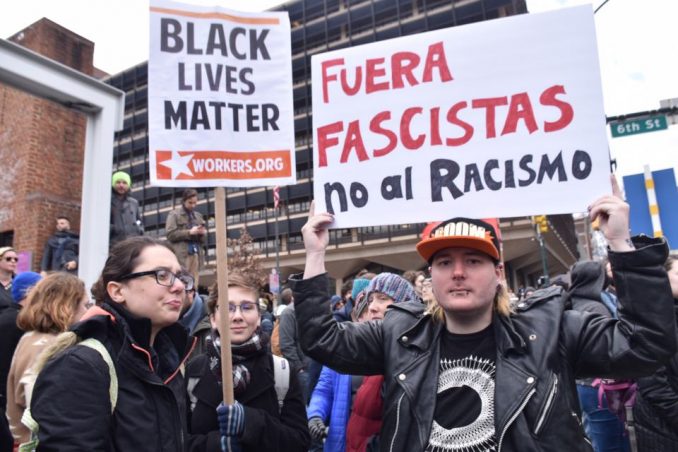 Philadelphia — People power won the day as an overwhelming mobilization of solidarity and unity drowned out and defeated a white supremacist gathering in the streets here on Nov. 17. Over a thousand people joined the demonstration to oppose a planned rally by a collection of far-right and fascist forces, including the Proud Boys and other neo-Nazi and Klan affiliated groups. Only a handful of white supremacists showed up, protected by hundreds of Philadelphia cops and other police agencies behind several rows of metal barricades.

For upwards of four hours, activists shouted down the gathering of racist bigots directly across the street with chants of “Migrants in! Racists out!,” “From Palestine to Mexico, border walls have got to go!,” “Nazi scum, off our streets!,” “No cops, no KKK, no fascist USA!” and many more.

Solidarity and unity were the order of the day, as speakers from a wide range of socialist organizations, unions and other progressive organizations took to the mic to denounce the rise of vile white supremacy that Trump is mobilizing in this period.

Activists shed light on the role of the police in protecting these fascist forces and raised the importance of connecting our many struggles for liberation to fight back and build power for working class and oppressed peoples. In many ways, it was an unprecedented show of a high level of cooperation among a wide array of left forces.

Many of those who spoke throughout the rally expressed solidarity with the refugee caravan currently making its way through Mexico to the U.S. border.

Connections were also drawn with the struggle for LGBTQ2S liberation, particularly in the face of Trump’s growing attacks on trans people, and the struggle against the police and U.S. Immigration and Customs Enforcement in working-class communities of color as well as the need for international solidarity. More and more people are seeing our struggle here through the lens of the growth of fascism worldwide that the U.S. gives material and political support to and the need to build fighting organizations here.

At one point, two Proud Boys who participated in the vicious attack against anti-fascists, people of color and LGBTQ2S people in New York City on Oct. 12 were spotted among the demonstration. They were promptly kicked out of the space and received a police escort to the white supremacist rally across the street. That was after the cops had earlier assaulted protesters with their bikes as the demonstration began. Several anti-racists were  arrested.

The demonstration ended triumphantly as the fascists quietly shut down their rally and received a police escort by cops on horses and bikes. Reports later surfaced that many taxi and Uber drivers, whom the racists called when they were attempting to leave, refused to give them rides when they realized who they were.

The mobilization in Philadelphia handed a resounding defeat to the forces of reaction, white supremacy and fascism, who were given a platform and organizational support by the corporate media, Trump and other sections of the ruling class in this period of capitalism at a dead end.

It showed that in spite of that, unity in action, solidarity and a concerted, organized mobilization of people power can beat back white supremacy and pave the way forward through struggle toward liberation and the defeat of this rotten system once and for all.