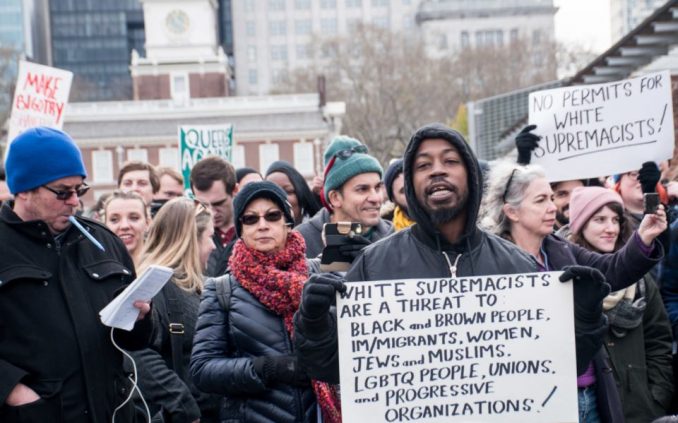 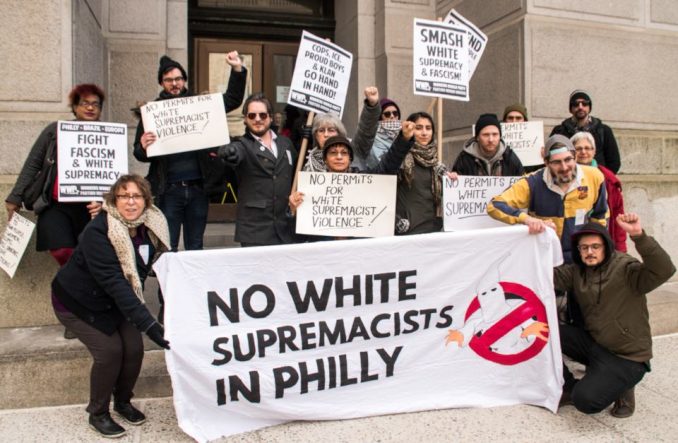 At a Nov. 14 Press Conference in Philadelphia, Berta Joubert-Ceci, speaking for the Philadelphia-Camden Boricua Committee, demanded that Philadelphia Mayor Jim Kenney and the National Park Service deny a permit to white supremacist groups who plan to hold a rally on Nov. 17 near Constitution Hall.

This is NOT the time to be silent. Silence equals being complicit with the violence of white supremacy. We are not talking of prejudice, but of the real acting out of their racism and intolerance in a vicious, violent way, complicit with the committing of hate crimes based on the ethnicity, religion, gender, sexual orientation.

I direct these words to the people in Philadelphia who despise racism, who despise any kind of bigotry.

I direct these words to Mayor Kinney and his administration.

That includes each and every Councilperson who does not oppose this hateful Proud Boys rally.

Mayor Kinney, do you think that this racist rally will have no consequences to our city? What is the city to do when hate crimes increase? And let’s be clear, this is what this rally is about — to rally the racists and bigots in Philadelphia and nearby regions to commit hate actions and crimes.

For those who defend these hateful groups on the basis of “free speech,” I say: Theirs is not free speech. Theirs is an invitation to harm physically, to commit murder!

And we have to ask ourselves: What happens after a hate attack is committed? It’s up to the police to report them to the federal level, on a voluntary basis … What are the penalties? How many attackers have been convicted in a court of law?

Sisters and brothers, the best way to eliminate hate crimes is PREVENTION!!! And this is what we are demanding today by calling on the Mayor and City Council to protect the city residents by declaring the Proud Boys Persona Non Grata in Philly, to demand that the Park Services cancel their permit. And to declare the City of Philadelphia — the so-called City of Brotherly Love — a city where hateful white supremacists and bigots are NOT ALLOWED!

At a time when the White House administration has given a green light to hate crimes, our city should have the courage to stand against this egregious civil rights attack, [for] the right to live in peace in this city.

We cannot take this rally out of the framework of what is happening in this country. So, let’s review just some of the latest news:

Law enforcement agencies reported that 7,175 hate crimes occurred in 2017, up from 6,121 in 2016. That increase was fueled in part by more police departments reporting hate crime data to the FBI, but overall there is still a large number of departments that report no hate crimes to the federal database.

More than half of hate crimes, about three out of every five, targeted a person’s race or ethnicity, while about one out of five targeted their religion … Incidents targeting people for their sexual orientation accounted for 1,130 hate crimes, according to the FBI.

Of the more than 7,000 hate crime incidents in 2017, more than 4,000 were crimes against people, ranging from threats and intimidation to assault, to murder.

And then, who are these Proud Boys whose speech is protected? I would like to quote from an article of the Southern Poverty Law Center from last October 18:

“Last Friday, Proud Boys leader Gavin McInnes riled up a crowd of supporters at New York City’s Metropolitan Republican Club with what he played off as a comedy routine — the commemoration and celebration of the 1960 televised assassination of a socialist.

“McInnes’ talk kicked off an evening marred by violence. After his remarks ended, Proud Boys streamed onto the street and, just blocks from the original venue, violently beat three protesters. One bragged that he had kicked his victim “right in the f**king head.” “He was a f**king foreigner,” he said. Then he and another Proud Boy congratulated each other with a brotherly embrace.

“But the behavior on display that night on New York’s Upper East Side was anything but unexpected in light of the group’s recent conduct and, at a broader level, their guiding philosophy. Violence is at the core of their ideology and their primary tool for silencing their political foes.

“We will kill you. That’s the Proud Boys in a nutshell.”

I urge all of you to read that article. (tinyurl.com/y6wyv6hu)

Are we allowing this in Philly?

Mayor Kinney, City Council Members, on your hands is the answer. You are the ones who will bear any negative consequences.

As a Philadelphia resident, I did my duty.