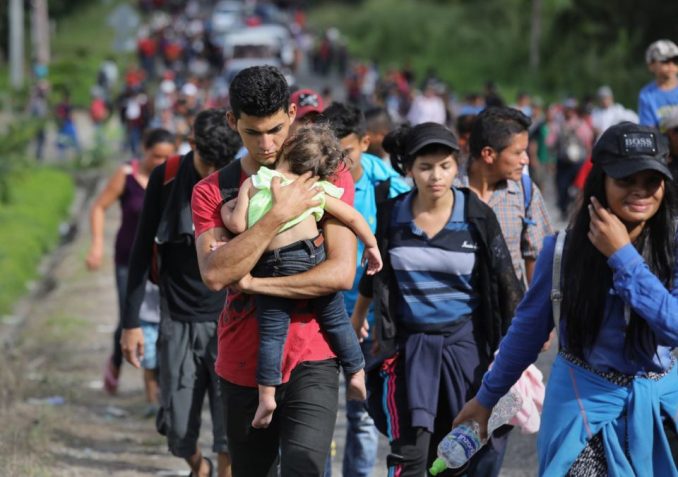 The U.S. president has, in effect, suspended the right to seek asylum in the U.S. On Nov. 8 he signed a proclamation that asylum can only be applied for at an “official port of entry.” This proclamation negates longstanding laws that allow asylum requests, regardless of immigration or entry status.

Trump invoked “national security” to justify this new “America First” action. He also sent 5,000 U.S. troops to the border with Mexico. He is ordering them to point their guns at the human beings now in the refugee caravans travelling out of Honduras, through Guatemala and Mexico, toward the U.S. border.

More than three caravans of over 10,000 people are currently in transit — in a collective mass migration. These are refugees seeking asylum from U.S.-instigated and -orchestrated economic and political coups in their own country.

These are people, including whole families, desperately fleeing from the catastrophic, violent conditions unleashed by capitalism and by U.S. imperialism’s violent intervention in their homeland. They risk many dangers during their journey, including clandestine state violence, murder, “disappearance” and sexual violence against women and gender nonconforming people.

Nevertheless, they are bravely marching toward the United States, an oppressor country, which they believe is a place they can live with less fear for their lives and their futures.

Trump’s proclamation against the heroic caravan marchers is yet another of his consistently, rabidly, white supremacist official acts.

His white nationalist, anti-immigration, racist, sexist program already makes him eligible for instant membership in any Ku Klux Klan klavern. His backing of “American values” and “Christian morality” through administrative appointments is a camouflage for anti-worker, anti-woman, anti-LGBTQ and anti-disability programs pursued in over a hundred years of Klan violence.

“Make America Great Again” is a 21st century update of the old KKK pledge to “purify” the U.S. — a nation founded on theft from and massacre of Indigenous peoples and the enslavement of African people!

Their Mexican supporters understand the poverty and violence from which the refugees are fleeing. Said Lesbia Cinco Ley, 70 years old, “Today it’s them. Tomorrow it could be us.” (Washington Post, Oct. 26)

Today, within the U.S., the violence of the right-wing agenda is already wreaking brutal havoc on the lives of many, many people, including migrants and refugees already within these borders.

Wherever we are in the U.S., we cannot wait until tomorrow to mobilize — for others, for ourselves, for a different path to the future. Now is the time for specific, coordinated, militant actions in every sphere against extremist right-wing agendas.

Now is the time for solidarity between all progressive and justice-seeking people — to rise up in renewed struggle.