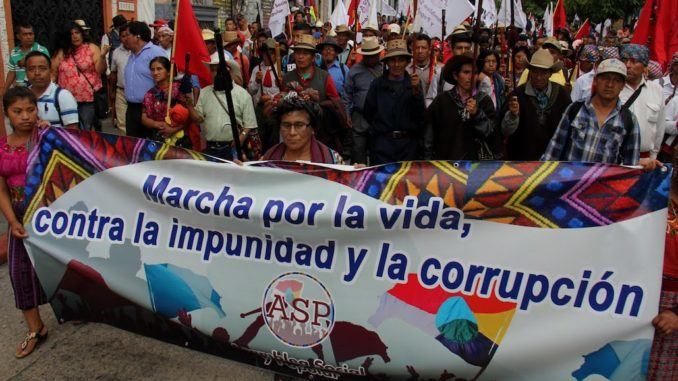 The Movement for the Liberation of the People was formally registered in Guatemala as a new political party on Nov. 7. It represents an electoral vehicle for the Peasant Development Committee (Comité de Desarrollo Campesino — Codeca), one of the organizations that has led the struggle against the government of President Jimmy Morales.

MLP was registered to participate in the 2019 general elections after reaching the minimum number of members needed. Its stated objectives as a political party include: “nationalizing all goods and services privatized in the country, promoting the process of a popular and plurinational constituent assembly, building the plurinational state from the Indigenous autonomous areas, recovering lands, territories and water for cultivation and national consumption and organizing the whole country into communities for the recovery and defense of dignity and plurinational sovereignty to build good living.” (publinenews.gt, Nov. 7)

The formation of the MLP comes in the context of a struggle against the impunity of corrupt politicians representing the oligarchy and the failure to prosecute them. The Morales government recently provoked major protests when it attempted to suspend the International Commission Against Impunity in Guatemala (CICIG).

Although the masses and the Constitutional Court rejected the president’s attempt to protect himself from CICIG investigations, Morales has effectively prevented the head of CICIG from returning to the country.

But some victories have been won. At the time of this writing, three political parties have been suspended since 2015 for illegal activities (mainly illegal financing), including the Renewed Democratic Freedom party, the party with the most seats in Congress, and the Patriot Party. The PP is the party of former President Otto Pérez Molina, who resigned before the last elections amid an investigation by CICIG.

With the corrupt politicians on the defensive and the formation of a new grassroots political party focused on structural reform, the 2019 elections could be important for the country.