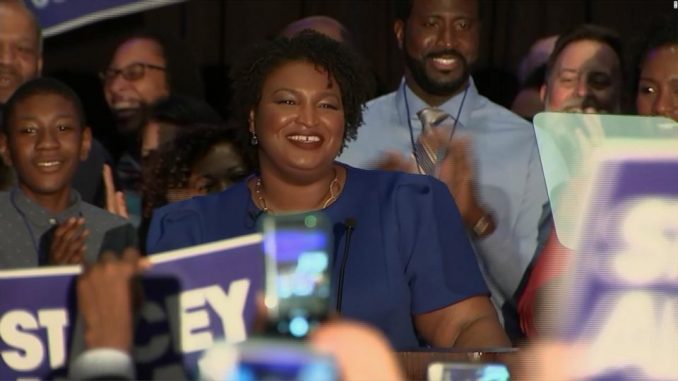 Nov. 12 — Given a tight race in Georgia for the position of governor, the outcome was not decided on election day, Nov. 6.  This is an historic and significant race. Why? Because for the first time in U.S. history, a woman of African descent, Stacey Abrams, is making a serious bid for the governorship. The race was so close that her political team is demanding a recount.

Stacey Yvonne Abrams is a lawyer and novelist who served as minority leader of the Georgia House of Representatives from 2011 to 2017.

Her white opponent, Brian Kemp, is a former Georgia secretary of state, who fended off accusations that he had used his position to make it harder for Black people and other disenfranchised segments of the population, including the working-class poor, to vote.

Kemp recently resigned due to his abuses of power as head of the Georgia Board of Elections, including deleting over 1.5 million voters from the rolls for various made-up offenses. However, his official reason for the resignation is to transition into the office of governor of Georgia.

Currently, Kemp is reportedly ahead by an estimated 60,000 votes, and has already declared himself the victor, even though all the votes haven’t been counted.  A candidate has to receive more than 50 percent of the votes in order to win the election. Even if he ends up with more votes than Abrams, if he falls short of 50 percent, there will be a runoff on Dec. 4.

Stacey Abrams is being called out for not conceding defeat. This call is racist in itself, because rich white males are telling a Black woman to sit down and shut up.

Trump had the white supremist gall to say on his Twitter feed: “@BrianKempGA ran a great race in Georgia — he won. It is time to move on!”

However, Stacey Abrams remains optimistic in her bid for governor. “I want to say this: If I wasn’t your first choice or if you made no choice at all, you’re gonna have a chance to do a do-over,” Abrams said during a speech to supporters, alluding to a potential recount.

She went on to say, “Our democracy should work for all of us, regardless of political leanings, race, income, or region. Voting is a right, not a privilege. It is fundamental to our democracy and to our Georgia, and I will fight every single day until our government — a government of the people, by the people, and for the people — works for all of us.”

Oprah Winfrey did some door knocks and campaigning in Georgia, and we all know the power of O. Winfrey is such a powerful Black woman that the white supremacists seized on the moment to attack her and Stacey Abrams with robocalls to voters. They carried this disgusting, racist message while impersonating the voice of Winfrey: “This is the magical negro, Oprah Winfrey, asking you to make my fellow negress, Stacey Abrams, the governor of Georgia. Years ago, the Jews who own the American media saw something in me — the ability to trick dumb white women into thinking I was like them, and to do, read, and think what I told them to. I see that same potential in Stacey Abrams.”

This is clear evidence that, yes, the Black vote does matter, including adding progressive referendums and amendments to state constitutions. Why else would various states try so hard to force the Black vote to be null and void?

By not conceding, Stacey Abrams shows respect for the process of voting until every vote is counted. Win or lose, Stacey Abrams wants the will of the masses, especially Black and other oppressed peoples, to be recognized and asserted.