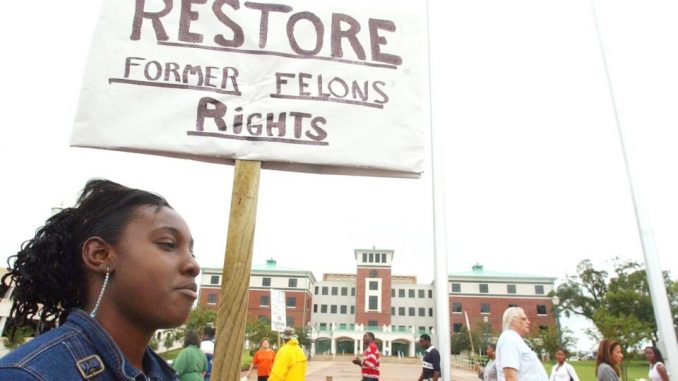 In an historic first for Florida on Nov. 10, just days after the general election, Florida Secretary of State Ken Detzner ordered voting machine recounts in contests for senate, governor and agricultural commissioner.

The action was mandatory after vote tallies from 67 counties left contests too close to call.  Margins separating the candidates in the three races had fallen below the 0.5 percent difference that automatically triggers a recount.

If not resolved by Nov. 15, or if margins fall below 0.25 percent, a hand recount would have to be conducted.

In the race for governor, after the recount was launched, Democrat Andrew Gillum withdrew an earlier concession he had made to Republican Ron DeSantis, whose lead had fallen to 0.41 percent.

Gillum, the first Black gubernatorial nominee in Florida and son of working-class parents, would be the state’s first Black governor if he won.  Currently the mayor of Tallahassee, Gillum ran on a progressive platform calling for Medicare-for-all and a $15 minimum wage.

His opponent, three-term member of the U.S. House Ron DeSantis, was endorsed by Trump.  DeSantis is a founding member of the Freedom Caucus, a group of the most conservative members of the House.  In a TV interview during the campaign, DeSantis made the racist comment that “voters would ‘monkey this up’ by electing his liberal African-American opponent.” (Miami Herald, Aug. 29)

In the Senate race, incumbent Democrat Bill Nelson, who has never conceded the race, trailed his Republican challenger Gov. Rick Scott by less than 0.15 percent.  Scott also received strong support from Trump. Even before the recount was announced, the Nelson campaign had filed a lawsuit against Detzner over the state’s process for validating vote-by-mail ballots.

On election day, the ballots of thousands of voters were thrown out when poll workers claimed the original in-person signature did not match one subsequently done by voters on a finger-touch pad — a very common problem.

Other attempts at voter repression in Florida have been reported.

Before the Nov. 6 general election, voters in largely Black neighborhoods in North Miami were made to wait in long lines for hours on Nov. 4, the final day of early voting.  When printers used to generate customized ballots failed by early afternoon, people were forced to use preprinted ballots until those too ran out.

According to state elections data, hundreds of thousands of absentee ballots that were mailed out were not returned, especially in Palm Beach, Broward and Miami-Dade counties.  Over two-thirds of the 265,687 ballots not returned in those counties were from registered Democrats.

The data also revealed that election supervisors failed to send out more than 20,000 requested ballots until after the Oct. 31 legal cutoff.  Some were even delivered on Nov. 6 — election day. Yet many voters who had learned that their absentee returns had not been counted reported mailing them back weeks before the cutoff date.

Whether the recount results in a reversal of the outcomes from the Nov. 6 election, the passage of Florida Amendment 4 (Voting Rights Restoration for Felons Initiative) has ended one of the harshest voting restrictions in the U.S. and a legacy of Jim Crow.

Florida, Iowa and Kentucky remain the only three states preventing people with felony records from voting. Over the last 20 years, California, Alabama, Maryland and Virginia have enacted similar reforms.

In Florida any crime over $300, and even driving three times with a suspended license, could result in a felony conviction.  While those being Black of voting age were disproportionately impacted by the ban, the fact that 70 percent of those convicted of felonies in Florida were not African-American may account for the bipartisan support for the measure, which passed by a margin of 64.53 to 35.47 percent.

The amendment, which takes effect in January 2019, will allow an estimated 1.4 million people to exercise their long-denied right to vote.