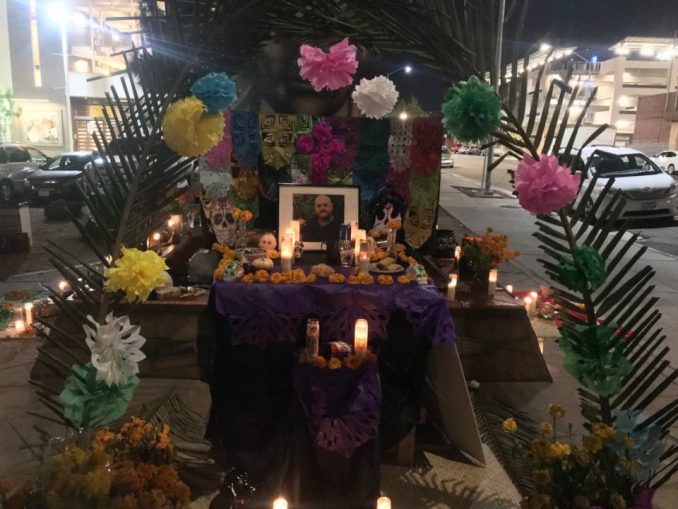 The altar for Pablo Aceves in San Diego.

San Diego — Dia de los Muertos (Day of the Dead) is a traditional Mexican holiday dating back to precolonial history before the Spanish colonization in the 1500s. The currently celebrated Dia de los Muertos is an acculturated practice syncretizing elements of Indigenous culture and Mexican-Catholic traditions.

A moment of remembrance, prayer, processions and altars are generally organized in recognition of family and friends who have died.

Dia de los Muertos maintains a crucial importance throughout what some call Mexico de Afuera, the Mexican diaspora. This is certainly true in San Diego where Dia de los Muertos plays an important role in remembering the history of struggle by Chicanx people for dignity and self-determination.

In San Diego, the Dia de los Muertos procession, organized by a collective of organizers at the Sherman Heights community center, honors family and friends and also remembers the multinational history of struggle in San Diego’s barrios, namely the conjoined struggle of Black and Brown people.

This year members of San Diego’s chapter of Brown Berets de Aztlan invited members of Workers World Party-San Diego and the Committee Against Police Brutality-San Diego to participate in the Procesion de Muertos on Nov. 2.

Procesion de Muertos is a 1.5-mile walk from the Sherman Heights Community Center southwest to Chicano Park. This is the public space below the Coronado Bridge established as the result of a protracted struggle waged by Chicanx activists in opposition to the creation of a police station and the redistricted, gentrified “development” of the area, Logan Heights/Barrio Logan.

On Nov. 2 thousands of Chicanx and Latinx families attended the gathering in Chicano Park. Brown Berets, Union del Barrio, an Aztec dancer and community activists participated in the procession to the park. There was even a delegation of Indigenous activists from South America, who were in town for a plenum being held at El Centro Cultural de la Raza. This is an affiliated community center a few miles north of Chicano Park in San Diego’s cultural hub of Balboa Park.

The pillars holding up Coronado Bridge, which hovers over Chicano Park, are painted with a variety of heroes of Mexican, Chicanx and Latinx history, from Frida Kahlo to Che Guevara. On Nov. 2, these pillars, the center stage and most of the benches and plots in the park were adorned with altars to many who had fallen in a life of struggle.

One altar recognized four victims of a 2016 car crash. There was public recognition of Brown and Black people killed by state violence. The altar to the fallen leaders of Union del Barrio stood out. Two of those remembered leaders were founding member Ernesto “Neto” Bustillos and the recently deceased Pablo Aceves.

Aceves died on Sept. 29 at the age of 50.  A stalwart fighter for social justice in San Diego, Aceves dedicated 31 years of his life to Union del Barrio.  The longest serving member of UdB at the time he died, Aceves was a member of its Central Committee. A friend of WWP-SD and CAPB-SD, Aceves was unwavering in his support for all oppressed people and a serious proponent of Black-Brown unity.

The author of this article remembers Aceves’ leadership in the San Diego No More Prisons Coalition as well as the struggle against police killing of unarmed Black and Brown people in the region.  With a commitment by his family, friends and comrades to annually remember him with their altars on Dia de los Muertos in Chicano Park, Aceves will not be forgotten.