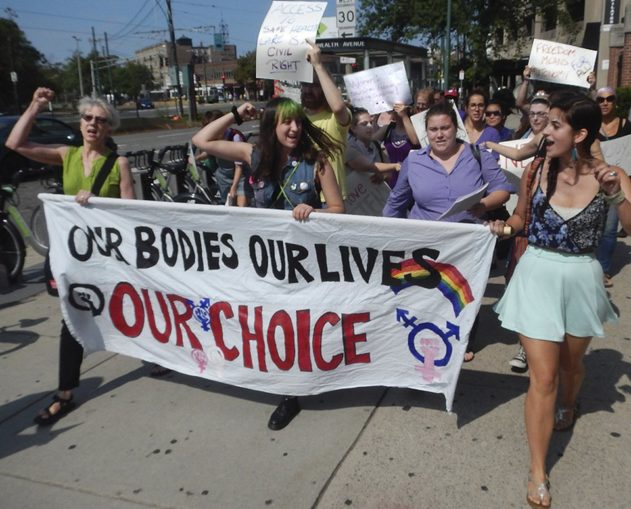 The Trump administration strategically announced three new rules about birth control and abortion coverage on Nov. 7. Women’s health advocates saw the timing the day after the election as a renewed attack in Trump’s war on reproductive justice.

The U.S. Departments of Health and Human Services, Treasury and Labor jointly announced two newly revised rules for nonprofits and some businesses to apply for religious or moral exemptions to the Affordable Care Act’s birth control mandate. The ACA requires that contraceptives, defined as preventive care, be provided without a co-pay. Some rules are already on the books due to Supreme Court rulings beginning in 2014 that affirmed such exemptions.

The misogynous, anti-abortion Trump cabal, catering to its evangelical base, has twice before tried to expand the exemptions. Two federal district courts ruled against them. A judge in the Oakland, Calif., wrote in December 2017: The rules would “transform contraceptive coverage from a legal entitlement to an essentially gratuitous benefit wholly subject to their employer’s discretion.”

A May 2018 report by the Guttmacher Institute, which studies women’s health care, succinctly sums that up in an article titled: “In Bad Faith: How Conservatives Are Weaponizing ‘Religious Liberty’ to Allow Institutions to Discriminate.”

In what ways the new rules will differ from previous ones — and survive appeals — has not yet been determined.

A Nov. 8 Rewire.News article reports that these birth control rules will directly endanger health care for more than 55 million cisgender women and an unknown number of trans and nonbinary people who depend on ACA’s free contraceptive care.

“These rules threaten to erode decades of progress in increasing women’s [sic] reproductive autonomy,” said Dr. Lisa Hollier, president of the American College of Obstetricians and Gynecologists. She added that the final rules “follow an alarming pattern of medically unnecessary decisions in health policy that, together, undermine access to care and advance harmful, medically inaccurate rhetoric about women’s [and gender nonconforming people’s] health.”

As an Oct. 30 New York Times article observed: “The Obama administration cited studies showing that as the use of contraceptives went up, the rate of unintended pregnancies came down. But the Trump administration said these studies did not prove a causal link.” That’s yet another example of the current administration thumbing its nose at science.

The Centers for Medicare and Medicaid Services, a division of HHS, announced a new rule that would require ACA health insurance plans in 2019 to separate out any portion of premiums that would apply to abortion care and bill customers separately for it. That means customers would have to pay the abortion care premium out-of-pocket. Until now, the payment was separate, but the bill was not.

This requirement, noted Rewire.News, would increase overhead costs for health insurance companies providing abortion coverage, which would discourage companies from offering it. And customers might object to paying for the abortion-related portion of coverage — an outcome which anti-choice groups have long supported.

News from states and other developments

Two states passed referendums limiting abortion in anticipation that the Supreme Court will soon overturn its 1973 Roe v. Wade decision legalizing abortion. The Center for Reproductive Rights estimates that access to abortion would be at high risk in 22 states if Roe is overturned.

Alabama passed a constitutional amendment declaring state policy is to “support the sanctity of unborn life and the rights of unborn children” and “not protect the right to abortion or require funding for abortion.” There is no exemption in case of rape, incest or endangerment to the health or life of the mother. The amendment has been nicknamed the “personhood amendment,” and will be challenged in court.

West Virginia approved a measure that strips away any protection in the state constitution for abortion rights. It also cuts any Medicaid funding for abortions (exceptions are rape, incest and maternal health) and sets a jail sentence of three to 10 years for anyone who performs or receives the procedure. Given that state laws criminalizing abortion are exceedingly rare, this measure will be appealed.

Iowa Gov. Kim Reynolds signed one of the country’s most restrictive abortion bills on May 4. The so-called “heartbeat” law bans abortions once a fetal heartbeat has been detected at about six weeks. Exceptions allow for cases of rape, incest and medical emergency. The law is being challenged in court, while Reynolds was reelected.

Meanwhile, Oregon voters turned down Measure 106 prohibiting public funding for most abortions. The referendum sought to overturn the state’s Reproductive Health Equity Act passed last year. It guaranteed everyone access to abortion and other reproductive health services at no cost.

Three states, Idaho, Utah and Nebraska, approved ballot measures to expand Medicaid under the ACA. That will ensure 330,000 poor people — many Black and Brown individuals, single mothers, youth and gender nonconforming people — will have access to free or low-cost health care, including birth control.

A new study published in the May issue of Journal of Medical Internet Research reports there are 27 U.S. “abortion deserts” — major cities where pregnant people have to travel more than 100 miles to reach an abortion care facility. For example, a person living in Rapid City, S.D., has to drive 318 miles to reach the nearest provider in Billings, Mont.

In its 2017 report released May 8, the National Abortion Federation noted that trespassing at abortion clinics has tripled since Trump took office — from 247 incidents in 2016 to 823 in 2017. Such invasions violate an individual’s right to safely and privately secure an abortion. NAF asserts the Trump administration encouraged such offenses.