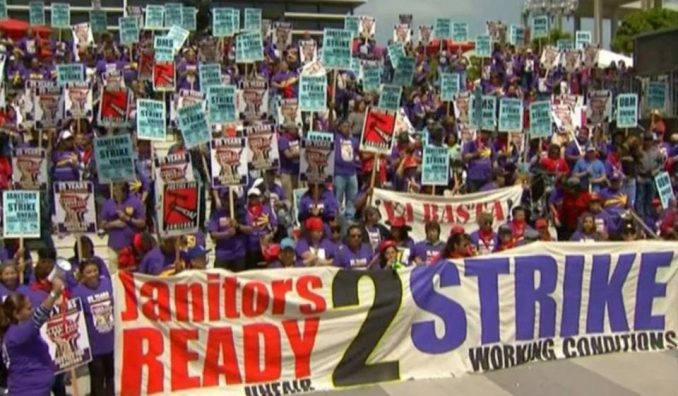 A majority of the five-member National Labor Relations Board are currently Trump appointees. With one seat vacant, they hold three seats, and that will jump to four when Trump replaces an outgoing board member. The president also appointed NLRB General Counsel Peter Robb.

This year John Ring — who along with Marvin Kaplan, William Emmanuel and Robb had previously been attorneys in the field of “union avoidance” — was made chair of the NLRB.

Since the last year’s appointments of Kaplan, Emmanuel and Robb, a number of NLRB rulings have made it harder to organize unions and harder for unions to represent members. The business mouthpiece Wall Street Journal ran a story last Jan. 31 headlined, “Trump’s Appointees Are Restoring Reason to the NLRB.” One example of this “reason” occurred when Emmanuel was caught in a conflict-of-interest scandal, having previously represented a company whose case was before the board.

The board’s bias toward capital has been demonstrated repeatedly. Most recently on Oct. 26, General Counsel Robb imposed new limits on a union’s fundamental right to picket. This right has been constricted since passage of the Taft-Hartley Act in 1947, which has been used repeatedly to disallow mass picketing that effectively deters scabbing.

Robb’s latest order, targeting janitors picketing a building where they worked, further erodes this basic right. Robb ruled that they could not picket the building because it was not owned by the cleaning company they worked for.

Robb’s interpretation of Taft-Hartley provisions prohibiting “secondary” actions — against employers who do not directly employ a group of workers — goes against NLRB rulings under earlier administrations that recognized “joint employment.” Robb overturned a decision of an NLRB administrative judge who had determined that Preferred Building Services, which contracted with the janitors’ direct employer, Ortiz Janitorial Services, was involved in supervising the workers and was thus considered a “joint employer.”

Millions of workers in today’s economy, with its tangled web of supply chains, are now employed by third-party subcontractors, where the company that contracts with other businesses still has a say on terms of employment and sometimes even supervises the workers.

Unions need the right to target a larger company that dictates terms to a smaller one.

Last December, the board made the definition of joint employment more restrictive. As the WSJ article gleefully points out, this could allow McDonald’s to refuse to bargain with workers directly employed by a franchisee.

Now, with the latest ruling against picketing, could workers trying to unionize a particular franchise or group of franchises be prohibited from picketing McDonald’s headquarters or a meeting of McDonald’s stockholders?

A broad assault on workers in motion

In the actual case of the California janitors, as well as the hypothetical case of McDonald’s cited by the WSJ, the NLRB is deliberately acting to weaken the powerful movement of low-wage workers, who are overwhelmingly people of color, immigrants, women and youth.

The NLRB also attacked retail workers in 2017 when it denied the right of salespeople in Macy’s fragrance and cosmetics department to organize as a “micro-unit.” Now, a union would have to organize all the store’s employees who are involved in similar work.

This decision could impact the drive to organize Volkswagen in Tennessee, where the company is refusing to honor an earlier NLRB decision that skilled maintenance workers who voted for union representation are a bona fide micro-unit and are entitled to bargain with VW.

In September, the board amended the standard under which a member can charge their union with violating the Duty of Fair Representation. Up until now a union member could file charges if a grievance handler failed to make “a good faith effort” on their behalf. Now a union can be held liable for “mere negligence” or “weak representation.”

On the surface this might not seem like an anti-union ruling: What’s wrong with compelling union representatives to do their job? But this ruling forces local unions to devote additional resources to tracking every grievance at every step and to keeping up with communications with every single member who has a grievance. Of course, every effort should be made to achieve this standard when resources permit. But a smaller local union that can’t afford full-time staff or representatives could find itself underwater trying to stay on top of every dispute with management.

A “weak representation” charge could also be leveled when a grievance handler, who makes a good faith effort on behalf of a member, nevertheless loses a grievance due to management intransigence or arbitrator bias. A charge could even be filed by a member disciplined for just cause — such as documented racist or sexual harassment — if their representative cannot get the discipline or discharge reversed.

Considering the general orientation of the NLRB, it can be concluded that this ruling is intended to hurt unions rather than help members.

The NLRB has never been a consistently reliable friend of unions. Its original purpose was to maintain class peace, not to make it easier for unions to engage in class struggle. Now, in the generalized anti-labor climate epitomized by the 2018 Supreme Court Janus decision, the board is openly functioning as a union-busting agency.

Unions were born in class struggle. Now it should be crystal clear that class struggle is the way forward. Teacher strikes, Fight for $15 and the mass worldwide walkout at Google are examples to follow.