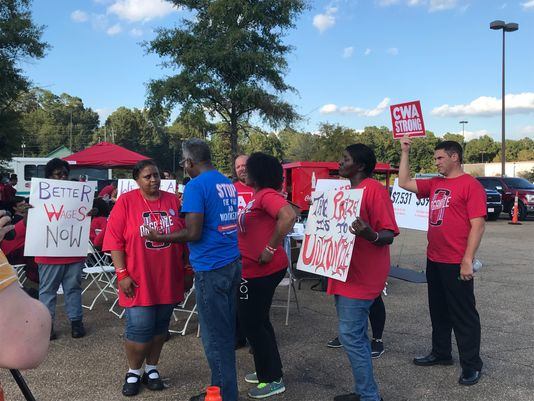 In Hattiesburg, Miss., hundreds of call center workers — almost all of them Black women — rallied Oct. 29 to protest poverty wages and demand a raise and a union. These workers for federal contractor General Dynamics Information Technology (GDIT) recently got a raise to $10.35 an hour, but that still keeps families in poverty. The workers handle complex questions about Medicare and the Affordable Care Act’s Marketplace.

Workers state that both the qualifications for and the nature of their work demand better wages. In February the Communications Workers (CWA) filed a complaint with the Department of Labor that GDIT misclassified call center agents at a lower rate than job duties merit. Under federal law, once workers join a union and collectively bargain better wages and benefits, the government can open up funds to cover these improvements at no cost to the company. Despite that, GDIT launched an anti-union campaign. A federal lawsuit filed in Mississippi’s Southern District in September against GDIT alleges wage theft and charges of racial discrimination. (Hattiesburg American, Oct. 29)

The rally coincided with a report from Georgetown University, “Strengthening Families and the Hattiesburg Economy: The Impacts of Improved Pay for Federally Contracted Call Center Workers.” The report shows that the GDIT low wages “compound existing racial and gender income disparities because the majority of employees are women and people of color.” (cwa-union.org, Oct. 29) Organizing can only help these workers fight their way out of discrimination and poverty wages!

The 24,000 members of American Federation of State, County and Municipal Employees Local 3299 unleashed a three-day strike on the University of California’s five medical centers on Oct. 23. The Local 3299 support staff and patient care workers in the five-unit medical and school system are majority Black and Brown women workers. The local is UC’s largest union, and this was its second walkout this year. The strike was joined by 15,000 members of University Professional and Technical Employees Local 9119.

Every day strikers halted scab deliveries to various campuses. The second day, hundreds of workers in green T-shirts with “We Run UC” marched, chanted and staged an impromptu dance party at UC San Francisco. They were joined by UNITE HERE members striking at Marriott hotels in the Bay Area, resulting in a majestic 1,000-strong rally. (Truthout, Nov. 2) Fighting unions roar for their members!

No to sexual harassment in Calif. hotel industry!

From McDonald’s to Google, workers are staging walkouts demanding an end to sexual harassment on the job. Hotel workers are especially vulnerable to such attacks. Take the case of dishwasher and chef assistant Sandra Pezqueda who filed a lawsuit last year against the luxurious Terranea Resort, just outside Los Angeles in Ranchos Palos Verdes, and the staffing agency employing her. Pezqueda reported constant sexual harassment and assault by her supervisor, who retaliated against her rejections by changing her work schedule. Honored as a silence breaker in Time Magazine’s Person of the Year 2017 issue as part of the #MeToo movement, Pezqueda received a $250,000 settlement in May from Terranea. Though the resort was cleared of wrongdoing, reports have continued of management’s sexist-racist work culture. In response to pressure from Terranea management, the Ranchos Palos Verdes City Council tabled a ballot initiative to install panic buttons for hotel workers until 2019.

Voter initiatives to protect hotel workers from sexual harassment are on the ballot in Long Beach and Oakland, Calif. If passed, the cities will join Chicago, which enacted a Hands Off, Pants On ordinance in 2017. While a statewide bill was introduced in early 2018 and passed by the state assembly in May, it was held up by the state senate appropriations committee. (Guardian, Oct. 16) Obviously catering to sexism in the state’s tourist industry is more important than worker safety.