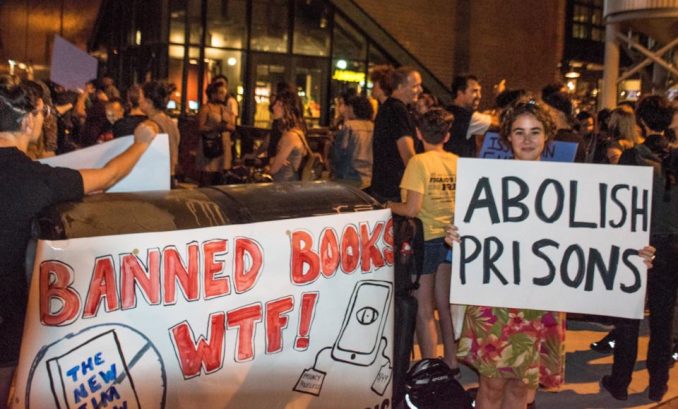 Corrections Secretary John Wetzel admitted that a month of protests, public hearings and social media campaigns have forced the Pennsylvania Department of Corrections to back down on new rules blocking prisoners’ access to books, letters and even legal correspondence.

With over 300 donated subscriptions of Workers World newspaper sent to prisoners in Pennsylvania, WW has had to challenge prison bans on specific issues several times since January 2017. Along with individual prisoners who have filed grievances when they do not receive an issue, WW has successfully forced the prisons to let most “banned” papers in.

On Nov. 1, the state DOC revised its new draconian policy and allowed book orders to again be sent “directly to inmates.” The move is hailed by organizations like Pittsburgh-based Book ‘Em and Philadelphia Books Through Bars, which for years have provided free, donated books to prisoners who request them.

Book shipments must still go through a centralized processing facility before getting to prisoners. Questions remain about how the DOC will ensure books reach the inmates who ordered them.

Under the September DOC policy, no books could be sent directly to prisoners, whether from donation groups or purchased for inmates directly from publishers. The policy required prisoners to order from a catalog of 8,500 high-priced ebooks selected by the DOC, plus purchase expensive ebook readers. Or they had to request books from prison kiosks that severely limited prisoners’ access.

Under the new policies, all prisoners’ mail must still be sent to and scanned by Smart Communications, a private for-profit company in Florida. Scanned copies are emailed to the DOC before they get printed and delivered to prisoners. Originals are destroyed while the DOC keeps copies in a searchable database.

Legal mail is now copied and given to the recipient, with the original — and highly sensitive — documents kept on file for 15 days.

On Oct. 30, Davon Hayes, a prisoner challenging a life sentence, filed a lawsuit claiming that the state’s policy concerning legal correspondence violates his First Amendment rights. The Pennsylvania American Civil Liberties Union, the Pennsylvania Institutional Law Project, the Abolitionist Law Center and the Amistad Law Project also filed lawsuits seeking an injunction against the DOC, saying the policy “deprives Mr. Hayes of an indispensable — and often the only viable — means of communication with his attorneys.”

Often prisoners find that scanned letters arrive with pages missing. Cards, photographs and even drawings from children are scanned, with the prison destroying the original items and giving inmates black-and-white copies. Families continue to demand this practice be stopped.

It remains unclear exactly how the new regulations will impact prisoners’ receipt of weekly publications. Workers World editors say they will continue to fight for prisoners’ right to have access to news written by and for workers and oppressed people.