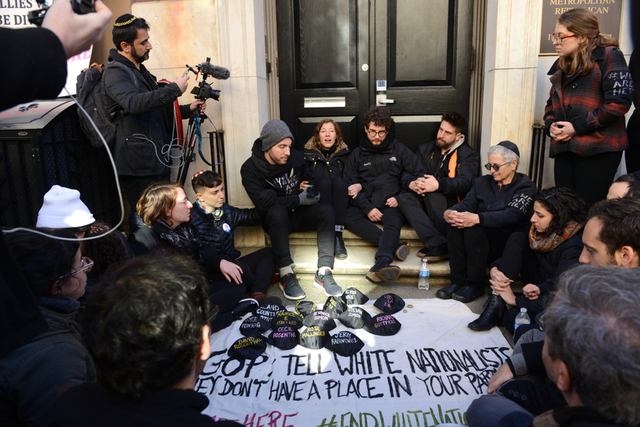 Protesters sat shiva for victims of the Pittsburgh synagogue massacre and banged on the doors of the Metropolitan Republican Club, New York City, Oct. 27.

Solidarity against racism, anti-immigrant xenophobia and anti-Semitism has swept the United States since the Oct. 27 Pittsburgh synagogue massacre. Individuals and organizations from many communities are uniting to push back the rise of openly fascist forces.

At the same time, these forces have stepped up their attacks. There’s been a surge of racist and anti-Semitic vandalism and violence. President Trump eggs this on with his ever-escalating campaign to demonize Central American refugees and pump up all forms of racism.

In the days leading to the Pittsburgh killings, the shooter Robert Bowers wrote on the white-supremacist social network Gab that Jews are “the enemy of the people.” Just hours before he entered the Tree of Life synagogue shouting, “All Jews must die,” and murdered 11 people, Bowers posted: “HIAS likes to bring invaders in that kill our people. I can’t sit by and watch my people get slaughtered. Screw your optics, I’m going in.”

HIAS is the Hebrew Immigrant Aid Society. According to its website, HIAS was founded in 1881 “to assist Jews fleeing pogroms in Russia and Eastern Europe,” and “now welcomes all who have fled persecution.” Recently HIAS has supported Central Americans seeking asylum in the U.S. In July, HIAS led 40 rabbis on a solidarity trip to the Texas border. On Oct. 19-20, a week before Bowers shot up the Pittsburgh synagogue, HIAS organized “National Refugee Shabat 2018,” encouraging synagogues across the country to dedicate their Sabbath services to supporting immigrants.

This is the kind of solidarity Trump seeks to break. He announced his candidacy in June 2015 by calling Mexicans rapists and criminals. He began his administration by trying to ban anyone from Muslim countries from entering the U.S. After Klan and Nazi thugs marched through Charlottesville, Va., in August 2017, killing Heather Heyer and injuring many, he characterized them as “very fine people.” Throughout the current election campaign, he has unleashed ever more brazen white nationalist rhetoric.

To block working-class unity against his boss class, Trump has given the green light for the most vile scum to rise to the surface.

A sharp rise in racist attacks against Black, Latinx and other communities of color is the direct result. Just three days before the Pittsburgh killings, another white supremacist, this one in Jeffersontown, Ky., tried to enter a Black church to kill parishioners. Failing to gain entry, he shot up a nearby Kroger supermarket, killing two Black people.

Though most don’t make the national news, many more racist acts happen every day around the country. Racist police routinely shoot down Black people, rarely with any repercussions.

When Dylann Roof murdered nine Black people in a racist massacre at Mother Emanuel African Methodist Episcopal Church in Charleston, S.C., on June 17, 2015, he did so the day after Trump announced he’d run for president.

Anti-Muslim violence has been on a sharp upswing. Since Trump’s inauguration, the group South Asian Americans Leading Together “has documented 416 incidents of hate violence and xenophobic political rhetoric against Muslim, Sikh, South Asian, Arab and Middle Eastern communities,” according to a statement.

The synagogue slaughter, driven by both anti-immigrant racism and anti-Semitism, was the worst violence against Jewish people in U.S. history. But it cannot come as a surprise. The number of anti-Jewish incidents in this country surged by over 50 percent in 2017. They ranged from anti-Semitic graffiti, to vandalism against cemeteries, community centers and synagogues, to physical assaults.

Even in New York City — with a Jewish population of over 1.5 million, by far the biggest anywhere in the world — there has been a sharp rise in such incidents. In the week after Pittsburgh, anti-Jewish graffiti was found in synagogues in several different parts of the city. Swastikas appeared on the walls of Jewish schools and on graves in Jewish cemeteries.

Grief, rage and solidarity marked the aftermath of the Tree of Life massacre. In Pittsburgh, thousands marched in sorrow and anger — and to tell Trump he was not welcome. Tens of thousands signed a letter with that message.

On Nov. 3, Pittsburgh’s first Sabbath services were held since the killings. Jewish people said they were overwhelmed at the outpouring of support as Muslims, Christians, Sikhs, Buddhists and nonreligious people attended.

Within days of the synagogue killings, Arab-American, Iranian and Muslim organizations had raised hundreds of thousands of dollars in donations to the victims’ families. The Rev. Eric S.C. Manning of Mother Emanuel Church flew to Pittsburgh, where he spoke at the funeral for Rose Mallinger, one of Bowers’ victims.

In New York, 14 young Jewish activists were arrested for sitting shiva — the Jewish mourning ritual — at the Metropolitan Republican Club. Just last month, the club had hosted a meeting of the white supremacist grouping calling itself the Proud Boys, after which the fascist thugs had attacked protesters outside.

Strong statements against anti-Semitism and racism were issued by the AFL-CIO and many national unions, including AFSCME, UNITE HERE, CWA and SEIU. Internationally, vigils, marches and services were held in cities on every continent. The Cuban Embassy in Washington sent condolences to the mayor of Pittsburgh.

And in Palestine, statements denouncing the synagogue killings were issued by both the Palestinian Ministry of Foreign Affairs and Diaspora and by Hamas, the elected governing party in Gaza.

Israeli politicians, meanwhile, used the tragedy to defend Trump and attack supporters of the Palestinian national liberation struggle. The newspaper Ha’aretz headlined its report: “American Jews may never forgive Israel for its reaction to the Pittsburgh massacre.”

In Washington, Sen. Cory Booker of New Jersey announced Nov. 2 that he will support the so-called Israel Anti-Boycott Act. The likely 2020 Democratic presidential candidate framed his announcement as a response to anti-Semitism.

In fact, the bill is an unconstitutional measure to outlaw support for the Boycott Divestment Sanctions campaign against the Israeli apartheid settler state. Rabbi Alissa Wise of Jewish Voice for Peace called Booker’s statement “a sad, wrong and truly dangerous decision.”