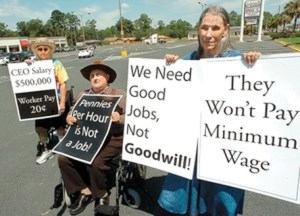 One of multiple protests in 2012 of Goodwill Industries paying subminimum wages to employees with disabilities.

Brooklyn, N.Y.  — The Fair Wages Task Force began its campaign to eliminate subminimum wages for disabled workers at a town hall event at the Brooklyn Museum on Oct. 21. October is Disability Employment Awareness Month. Fully 65 percent of workers with disabilities are unemployed!

An audience of over 150 disabled artists, activists and their supporters  held a lively discussion on the problems encountered by disabled artists.  Frequently institutions which show their work ask them to set up the display and, in the case of paintings, hang them. The artists would like the institutions to include a fee for their work in the overall budget. When the artwork of the disabled artist is displayed, they are not generally paid. However, their work deserves fair compensation, and artists should not be unpaid because they happen to be disabled.

Artists, including a painter, an actor and a performance artist, discussed the need for education of the audience and education of the general public to promote real inclusion in modern culture.

Cultural workers such as sign language interpreters are skilled not only in signing the words but also in acting them out with appropriate facial expressions.  It’s a draining profession, so there are usually two interpreters who change places, so one can take a rest. Likewise, caption writers bring insights to an audience of the hearing impaired.

Decades of struggle for inclusion in fair wages

A Fair Wages Task Force spokesperson with emotional and hearing loss disabilities began the event with an announcement of the campaign the coalition is waging to mandate minimum wage for disabled workers. Currently, under the U.S. Fair Labor Standards Act of 1938, employers can request a waiver to not pay the minimum wage to many categories of workers, including disabled workers. Some employers pay 22 cents an hour, sell their product at market rate and pay executives six-figure salaries.

The National Federation of the Blind, formed in 1940, has fought for decades to correct this injustice. The states of New Hampshire and Maryland and the city of Seattle have passed such laws, and Alaska’s Department of Labor has issued an order granting minimum wage rights to disabled people. But 47 states and the federal government still have not granted disabled people minimum wage equity. This includes New York, where the Fair Wages Task Force is concentrating its immediate efforts with a petition and legislation campaign.

The Task Force speaker related how one of the first acts of the Hitler regime in Germany, which murdered many millions for the crime of being different, occurred on July 14, 1933. The “Law for the Prevention of Progeny with Hereditary Diseases” was instituted, which called for the mandatory sterilization of all people with diseases considered hereditary. It specified many disabilities including mental illness. One of the Nazis’ big lies was that people with disabilities were of “less value.”

The speaker, a member of a New York City public sector workers union’s Committee on People with Disabilities, drew the applause of the audience when he stated, “Just as women and minorities are protected from discrimination in wages by the Equal Pay Act of 1963 and the Civil Rights Act of 1964, we workers with disabilities need protection against wage discrimination too. We invoke the slogan of the labor movement: ‘An Injury to One Is an Injury to All.’  If even one disabled worker in the U.S. is paid a subminimum wage, then all U.S. workers are injured!”

The message was clear: inclusion. It’s not a difficult goal to achieve, but it is often overlooked. When disabled people are included, they are often underpaid or not paid at all.

Educators are critical in developing this understanding of inclusion. Teachers can bring this message to their students.  One teacher said he thought it made him a better teacher when disabled students were mainstreamed into his classes and he had to redevelop his curriculum to make it instructive for all his students.

The second half of the town hall was the presentation of artworks created by the panelists. There was a series of paintings, followed by a short, silent, black-and-white video that was particularly thought-provoking. It was a video of a man pushing against an immovable wall. He would brace himself, push against the wall, and nothing happened. He would change his position, dig in his heels and push a little harder, but the wall still didn’t fall.  He squared his shoulders, widened his stance and pushed again, and the wall stood firm.

It was a metaphor for many things — the struggle of people with disabilities to be included in mainstream society, the struggle of the Puerto Rican people for independence, in short, any quest which is difficult to attain —  you supply the metaphor.

Ableist bosses and their friends in government should take notice: Disabled workers and artists are not willing to let the injustices committed against them just pile up!