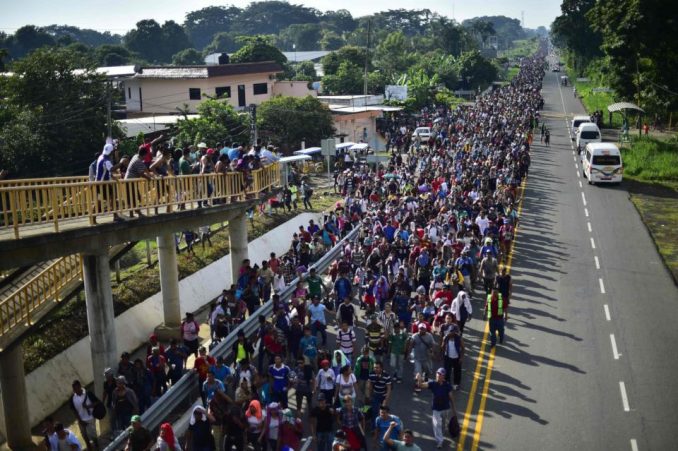 The mass exodus of workers from Central America making its way into the U.S. is described in the media as a “migrant caravan.”

But the workers fleeing their homeland in record, unprecedented numbers right now are refugees, not migrants.

According to the United Nations, a refugee is defined as “someone who has been forced to flee (their) country because of persecution, war or violence. A refugee has a well-founded fear of persecution. … Most likely, they cannot return home or are afraid to do so. War and … violence are leading causes.”

According to the Oct. 23 Daily Beast, in early October a pro-migrant radio activist in Honduras, Bartolo Fuentes, heard that small groups throughout the country were organizing among themselves to leave.

He told the Daily Beast that he “had helped repatriate the bodies of many migrants who died in the journey al Norte” and wanted to make sure this time people would be safer.

“No one expected this human avalanche,” he told the Beast. The word went out, though it later proved to be wrong, that someone would foot the bill for food and travel and that people would not have to pay the usual $7,000 for a smuggler.

As masses of people began to gather, from 2,000 to 3,000, the caravan grew to about 10,000 as more and more Hondurans came together. They were then surprisingly joined by thousands of Guatemalans and Salvadorans.

While activist caravans are common in this area, no one had ever seen anything like this.

In their own words

The sight of this mass exodus tears at the heart strings.

The wave of humanity risking everything, trekking in scorching heat and dangerous terrain, feet aching beyond words, with children sick and crying, women and LGBTQ folks fearing rape, everyone was uncertain if the journey would be made.

Workers are attempting to walk it all the way. And not just from Honduras, but from just about every nation in Central America.

Why do they do it? Why take those incredibly dangerous risks?

Why does a mother risk what one Mexican volunteer reported? In one of the worst cases his colleagues had seen, a baby was so badly burned by the tropical heat that the child had to be hospitalized in southern Mexico.

Why? Because the mother had no other options.

Delegates from Guatemala, El Salvador, Nicaragua, Costa Rica, Panama and Honduras met on Oct. 23-24 in Honduras and declared in a joint statement, “Beyond the Border,” that it is “capitalism that has caused this human migration.”

They stated that the situation in Honduras has become a “humanitarian, economic, social and political crisis” as a result of the International Monetary Fund and the World Bank. Along with the multinational corporations, the IMF and the World Bank provoke “extreme poverty, galloping national insecurity, no access to land, criminalization of social movements, massive political instability.”

The fraudulent government of President Juan Orlando Hernández has brought Honduras “from democracy to barbarity.”

This situation is a direct result of U.S. imperialism, which not only assured the illegal election of Hernández in 2009 but also has a history of decades of bloody intervention in the region.

UNICEF reports that about 2,300 children are on the caravan. Parents are forced to flee with their children because of this terrible instability. This includes the novel phenomena called “sacked,” which the Oct. 21 Al Jazeera says has become part of the national vocabulary today.

“Sacked” is the heinous act, carried out by state-supported thugs, of dismembering corpses and stuffing them in sacks, leaving them on the roads and highways. Men and women, including transpeople, are all killed in this manner.

One woman told Al Jazeera that she was forced to flee because gangs, which the government allows to operate with impunity, threatened her and her daughter.

“They do not forgive,” she said. When the gangs began to aggressively extort them for money, and threatened to kill her daughter if she did not pay, she had no choice but to leave.

There is no social contract protecting workers. There is only profit, privatization and unemployment. More and more people are getting hungrier and hungrier by the day. There is no work, no food.

More than 80 percent of Hondurans make less than the minimum wage; about 6 out of 10 Hondurans live in extreme poverty. Privatization of utilities such as electricity has meant skyrocketing costs. Electricity is being shut off in record numbers.

Human Rights Watch says that “impunity for crime and human rights abuses is the norm” in Honduras. The watchdog group Global Witness concluded: “Honduras is the deadliest country in the world for environmental activists.”

Even the conservative Carnegie Endowment for International Peace said Honduras is a country where “corruption is the operating system” and “repression is carefully targeted for maximum psychological effect.” (Vice, Oct. 26)

As the government lives high on the hog and benefits from the chaos, more and more Hondurans have to flee.

Activist Dunia Montoya told the Oct. 23 Daily Beast: “In Honduras 300 people leave every day. What frightens the world is the accumulation of a week or two of people that concentrated together, but we have been living in a humanitarian crisis since long ago.”

Honduras is collapsing under the weight of Washington’s policies.

President Donald Trump’s response from the get-go to the many caravans trying to come to the U.S. has been to appeal to his white supremacist, anti-immigrant base. He has decried the caravan as full of criminals, terrorists and “Middle Easterners,” in usual racist fearmongering.

He announced on Oct. 29 that he would be sending 5,000 troops to the border to prevent Central Americans from coming in. He wants to initiate a ban that was described by Human Rights First as amounting to a “Latino Ban.”

In reality it is a ban against all Black and Brown folks.

The Mexican government, a puppet of imperialism, has turned the guns on the caravan. Mexican troops killed a young Honduran man on Oct. 28.

Solidarity, on the other hand, is also very visible, as many Mexican senators have pledged a day’s pay to the caravan. Mexicans, poor themselves, are gathering food, clothes and money to help the caravan — with all their love and solidarity.

As the human exodus crossed from Guatemala to Mexico, supporters hung a banner over a bridge that read: “Your hearts are brave, don’t give up.”

The movement in the U.S. is pledging to meet the caravan at the border and organize to demand asylum for each and every person.

It is a human right to flee oppression, and it will be defended — especially when that oppression is made in Washington.