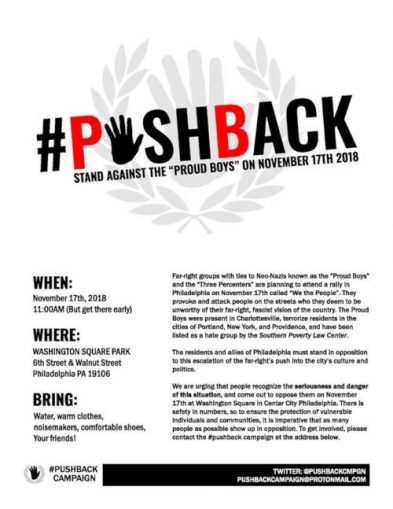 A motley group of far-right organizations, including the Proud Boys, plan to rally near Independence Hall in Philadelphia on Nov. 17 under the hypocritical constitutional slogan “We the People.”

The PushBack Campaign and Philly Antifa will organize counterprotests, supported by Workers World Party, to confront the fascists. Nov. 17 in Philadelphia offers a moment for those who oppose fascist violence to organize, mobilize and build a united movement against white supremacy, patriarchal violence and fascism.

The far-right organizers of the “We the People” event pretend to distance themselves from outright white supremacist fascists like the Ku Klux Klan and neo-Nazis. Nevertheless, the political program of the event is utterly anti-immigrant, pro-police and for “Patriots, Militia and three percenters.” That makes it very much an event for fascists.

The history of the Philadelphia police — of being perhaps the largest, most organized group of white supremacists in the entire city — shows it is likely they will be protecting the fascist demonstrators against the people. Philadelphia is known for its fascist Democrat mayor/police chief icon Frank Rizzo. (tinyurl.com/WWrizzo) Police forces in general protect the rights of these demonstrators, while offering no guarantees of safety for anti-fascists who will mobilize en masse to defend themselves. (tinyurl.com/ybkyjklv)

Three attacks during the last week of October showed the threat of fascist violence: the racist shooting at a Kroger grocery store in Kentucky, pipe bombs mailed to politicians and business magnates who oppose President Donald Trump, and the massacre in a Pittsburgh synagogue. These three cases reflect the growing threat of a developing fascist movement.

In the U.S., Trump, who recently declared himself a “nationalist” — he means “white nationalist” — is acting as the chief agitator and recruiter for fascism, helping to bring thousands of disgruntled people into a new white supremacist, anti-women, anti-LGBTQ movement.

As capitalism continues its decay, bringing uncertainty to the daily lives of the masses of people, it creates a climate where white supremacist, fascist gang violence is on the rise. All across Europe, neo-fascist parties are growing in strength and violence, usually directed against immigrants as the main scapegoat.

On Oct. 12, the Proud Boys, stirred to violence by their disgusting leader Gavin McInnes, attacked four anti-racist activists after McInnes spoke at the New York City Republican Club. The Proud Boys are a group of Trumpist, white supremacist men who advocate masculinist street fighting against anyone who is perceived to be against them.

This brand of white supremacist fascism, with its ties to and support by many in the Republican party, is one of many such groups, with a growing number of young members committed to bringing forth an all-white ethnostate by force.

Fascist organizations like the Proud Boys, Identity Evropa, Vanguard America and the KKK are responsible for the murder of Heather Heyer at the “Unite the Right” demonstration in Charlottesville, Va., in August 2017.

White supremacist cops kill more than 1,000 people each year. Border Patrol agents, whose “union” leaders openly sympathize with the Proud Boys, regularly kill, rape, imprison and torture migrants from across the world as they enter the U.S. These are fascist acts.

Historically, right-wing, white supremacist men have been the most violent terrorists in the history of the U.S. People may remember Timothy McVeigh, who killed 168 people in the 1995 Oklahoma City bombing; Eric Rudolph, who killed and injured people in Atlanta with bombs at the 1996 Olympics; and Dylann Roof, who killed nine people in a Black church in 2015 in Charleston, S.C. Along with these publicized cases is the legacy of white men killing people of color for “ideals” of alleged national and racial purity. That’s “as American (sic) as apple pie.”

Genocide, slavery, colonialism, patriarchy and capitalism are intertwined systems that create the basis for fascism in the United States. Indeed, people of color, Indigenous peoples, immigrants and colonized peoples have faced oppression throughout U.S. capitalist history.

Fascism and capitalism at a dead end

Why are fascists becoming more organized and violent? Is it Donald Trump? Is it Proud Boys leader Gavin McInnes? Is it the internet?

Historically, fascism has come as a response to a powerful working-class movement. Today’s embryonic fascist movement comes as a reaction to the gains of oppressed peoples, women, LGBTQ people, and others who have fought for justice.

Stirred by the conditions of capitalist decay, growing austerity, joblessness and social crises, Trump and the right continue to spread fascist-like formulations to deceive the masses and attack whatever protections still exist for people of color, im/migrants and all workers.

Fascism can arise as a desperate capitalist ruling class, determined to maintain its profit margins and domination, backs politicians who promise to unleash brutal, anti-democratic rule over the masses.

Beyond these many right-wing billionaires, the overall needs of the ruling class demand its overwhelming support for neoliberalism, austerity, automation, privatization, militarism and expanding exploitation — all of which create the basis for social upheavals that support the rise of fascism.

Communists, socialists, anarchists and all progressive people will be the ones mobilizing in Philadelphia to show how to defeat racism and fascism.

Through building principled solidarity, organizers will help to mobilize working-class opposition to white supremacy, anti-LGBTQ and anti-woman bigotry, and all forms of oppression in an effort to build unity against fascism and dead-end capitalism. Ultimately, a united movement that fights for the liberation of all oppressed people and seeks to build socialism will be the best deterrent to fascism.