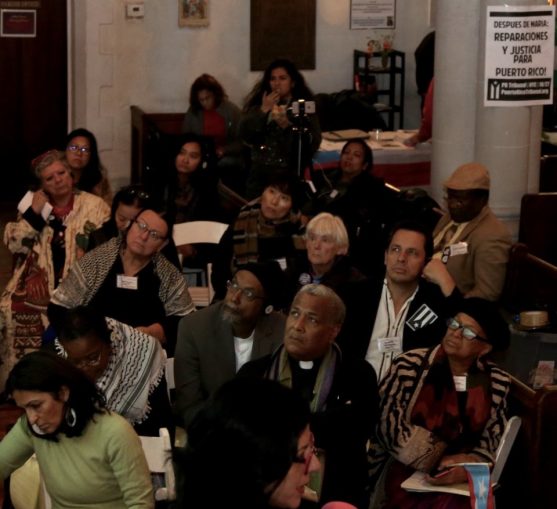 Following two hours of deliberation on the evening of Oct. 27 in New York City, the jury at the International Tribunal on U.S. Crimes in Puerto Rico issued the following verdict:

The International Tribunal on United States’ Colonial Crimes Against Puerto Rico, having met in open session as guests on unceded Lenape Indigenous land, on Oct 27, 2018;

Having heard testimony regarding the history of U.S. colonial rule over Puerto Rico since 1898; and

Having heard testimony from experts, eyewitnesses, colonial resisters and survivors — the majority of whom were born in Puerto Rico and continue to endure colonial depravity there — on the catastrophe endured by the Puerto Rican people both during and in the aftermath of Hurricane María;

Having viewed videotape interviews and examined other documentary material on these topics;

Hereby finds the U.S. government guilty of the following crimes against humanity, warranting all measures of relief and redress, including, but not limited to, reparations:

1. That it has deprived the people of Puerto Rico of their right to self-determination, a violation of international law;

2. That after buying Puerto Rico from Spain in 1989 without the consent of the people of Puerto Rico, it subdued popular resistance through military conquest, set up and maintains a settler-colonial regime;

3. That this colonialization of the Puerto Rican people took place over a century, during which independence movements were repressed with great bloodshed;

4. That the passage of Law 600 by the U.S. Congress in 1950 ostensibly allowing Puerto Rico to draft its own constitution (and its official status renamed “Commonwealth,” known in Spanish as “Estado Libre Asociado” or “Associated Free State”) effectively legalized U.S. colonialism and created a veneer of legitimacy to what was and remains the subjugation of the Puerto Rican people;

5. That this colonial imposition has profoundly and detrimentally impacted every area of life in Puerto Rico, from its domestic policies to its external relations, resulting in intergenerational psychosocial trauma;

6. That this colonial imposition has included theft of land for U.S. military bases and exercises that have contaminated the soil, air and water, resulting in widespread diseases, health deterioration and death, as well as destruction of wildlife and domestic farm animals; that it has further resulted in forced displacement, dispossession, loss of home and exile;

7. That this colonial imposition, through the so-called Fiscal Control Board, is directly responsible for the disastrous conditions still existing in Puerto Rico more than a year after Hurricane María, in which the U.S. corporations and banks, under the guise of helping with reconstruction, have expropriated billions of public dollars, creating a humanitarian crisis;

8. That this colonial imposition has used the hurricane as a pretext to further the long-standing neoliberal and right-wing policies of the U.S. government to privatize fundamental social services and destroy labor movements, especially in the fields of education and electricity;

10. That the U.S. has committed genocide against the Puerto Rican people, including decades of sterilization of Puerto Rican women, medical experimentation, suppression of Boricua culture, exploitation of Puerto Rican youth to fight imperialist wars, denial of basic human needs, including water, healthful food, a refusal of international humanitarian and solidarity aid from various nations, such as Cuba, Mexico and Venezuela, following Hurricane María.

Therefore, we hereby demand the following:

1. The U.S. government acknowledge and apologize for aforementioned crimes against the Puerto Rican people.

2. The U.S. surrender all property and power forcibly taken from the Puerto Rican people.

3. The U.S. pay reparations to victims of the crime of colonialism.