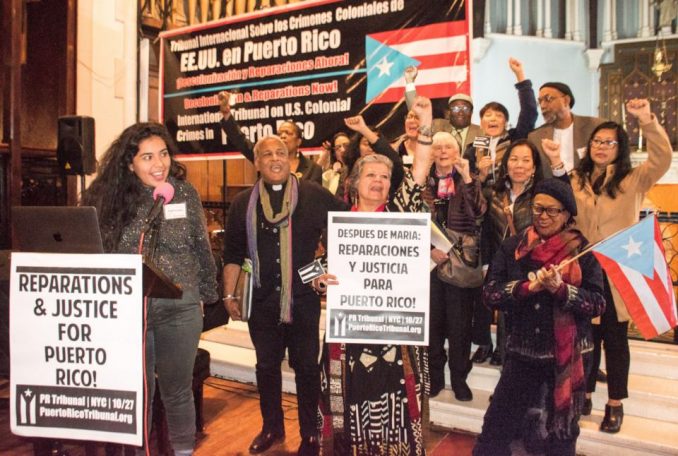 Jurors at the International Tribunal on U.S. Colonial Crimes in Puerto Rico, Oct. 27 in New York.

The jury found the U.S. government guilty of colonial crimes against Puerto Rico during its entire history since the U.S. seizure of Puerto Rico in 1898. The evidence included the latest economic assault on the Caribbean country following the devastation of hurricanes Irma and María in 2017. The verdict demands a full apology, return of property and payment of reparations.

Tribunal prosecutor Augusto Zamora, former ambassador from Nicaragua to Spain, started the proceedings by presenting the legal charges against the United States. Much of the indictment focused on U.S. attempts to disguise colonial rule under cover of designating Puerto Rico as a “Free Associated State,” based on laws passed in the early 1950s. These laws and the Puerto Rican “constitution” failed to meet the requirements set by the United Nations in 1960 when many countries began to end colonial status.

By imposing the U.S.-based Financial Control Board or Junta on Puerto Rico in 2016 to oversee an austerity program, the U.S. has laid bare its outright colonial control of Puerto Rico. Then Wall Street turned a spotlight on Puerto Rico’s colonial status by pillaging the country after the devastation of hurricanes Irma and María in 2017, Zamora argued.

Nearly all the presenters of testimony were Puerto Ricans from the archipelago who described U.S. crimes and Puerto Rican resistance in person or by video. In total, they built up a detailed legal case against the U.S. that supported both the indictment and the political conclusions of Rafael Cancel Miranda.

Puerto Rican independence fighter, hero and leader Cancel Miranda made the final presentation by video. His pointed 10-minute discourse outlined how Puerto Ricans resisted U.S. imperialism’s oppression of its people, how they have had to fight a huge military and media power. His explanation and personal example electrified the audience that filled the Holyrood Church, which responded with a standing ovation, just as they did two hours later after the jury’s verdict.

Cancel Miranda was jailed for decades following his intervention in the U.S. Congress hall, together with Lolita Lebrón, Irvin Flores and Andrés Figueroa Cordero, in 1954 to expose the farce of the newly created “Free Associated State” and demand independence for his homeland.

His overview for the International Tribunal on United States’ Colonial Crimes Against Puerto Rico began with the U.S. murders of Puerto Ricans in its first military attack on San Juan on May 12, 1898, and continued through the recent economic invasion imposed through Wall Street’s pillage of the country. Noting that up to $32 billion in annual profits are currently looted from there by U.S.-based transnationals, he concluded, “They owe us.”

Berta Joubert-Ceci and Frank Velgara coordinated the presentations during the testimony. One session exposed the destruction of the environment. Testimony from the city of Guayama — where coal plants poison the earth with carbon ash and heavy metals, causing maladies among the residents — indicted U.S. corporations. From the island of Vieques, testimony exposed how the U.S. Navy tested weapons there for over 60 years, poisoning the soil and the people.

In the session on “120 Years of Repression and Resistance,” young activists revealed both the history and the current high level of mobilization and fightback. One important focus was the defense of Nina Droz, now persecuted by the colonial state power for allegedly setting fire to a bank. The session featured videos of recent mass mobilizations.

Among the chief economic crimes exposed in that session were attempts to privatize the electrical power grid and public schools. This assault has included closing many schools and minimizing education for children with special needs.

Video testimony, which provides a short history of Puerto Rico as a U.S. colony, along with the resistance of its people, will be available on puertoricotribunal.org. Workers World will continue Tribunal coverage in upcoming issues.