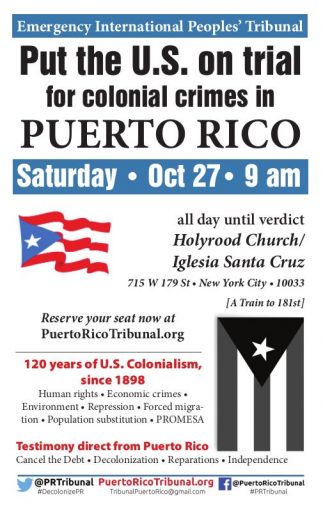 Oct. 23 — Even as a delegation of prominent activists from Puerto Rico is making preparations to come to the United States to demand justice for the horrors inflicted on their beautiful island by Hurricane Maria last fall, increasingly deadly storms have hit the Gulf states and southeastern U.S.

Deaths from Hurricane Maria were first reported as 64. That was a huge lie. The official figure is now 2,975.

Of those killed in Florida, Georgia, the Carolinas and Virginia earlier this month by Hurricane Michael, the latest body count stands at 39 and is still rising. As we write this, Willa, now a Category 4 hurricane, is dropping torrential rain on the Pacific Coast of Mexico, causing floods and mud slides in addition to wind damage.

It is criminal to shut one’s eyes at what is going on. These are not “natural” disasters. How the new threats posed by a warming planet are being handled by governments is not “natural” either.

Both result from the fact that capitalism is destroying the planet. For the owners of capital, the overriding motive in every situation is how to make the biggest buck. The current U.S. government is only the most unabashedly crude example of what political power in the hands of billionaires leads to — like denying climate change. This isn’t just a Trump thing. It has been going on for decades, even as scientists proved global warming was happening and cried out for something to be done about it.

The Tribunal on Puerto Rico, which takes place in New York on Oct. 27, is about the hurricane disaster, of course. But it will also look at Puerto Rico’s history as a colony of the United States.

The inability of the colonial government in PR to react as it should to the intense suffering of the survivors of that terrible storm, the way it tried to cover up the severe loss of life while allowing profiteers to pour in and secure fat contracts for “reconstruction” that never happened — all that is directly linked to the fact that the many strings governing the economy and politics of PR are held by Washington and Wall Street, not by the people of Puerto Rico.

There are many progressive movements on the rise in the U.S. There is growing fury over racism, police violence and mass incarceration; the subjugation and abuse of women; the denial of the most basic human rights to LGBTQ people, who have to fight every day just to be themselves; the superexploitation of low-wage and marginalized workers; the separation, detention and expulsion of migrant families and militarization of the border; the astronomical rise in class inequality, with millions of workers barely scraping by while billionaires suck up the wealth they produce; and the prospect of a planet so polluted it could soon be unable to sustain this human society.

All these horrendous problems boil down to one cause: the profit system. It has to go. There already exist the forces for a tremendous pushback, but time is short. Now, more than ever, is the time for solidarity and unity behind a mass movement that openly declares its goal: ending capitalism.