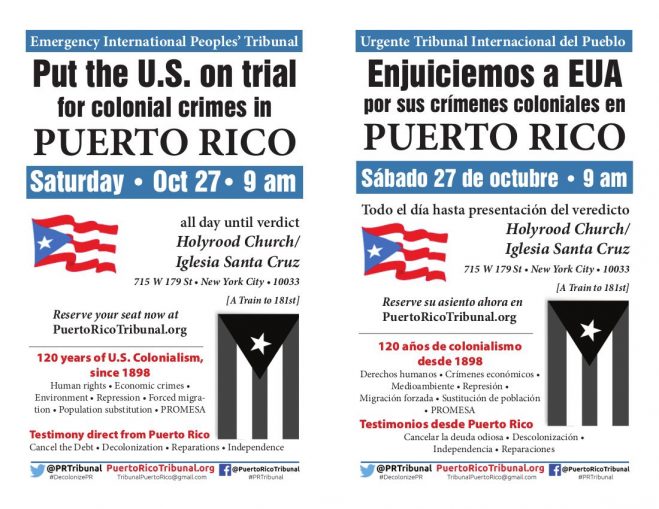 In a little more than a week on Oct. 27, voices from Puerto Rico will testify to the colonial crimes imposed on their island for 120 years in an emergency International Tribunal on U.S. Colonial Crimes Against Puerto Rico at Holyrood Church/Iglesia Santa Cruz in Manhattan.

As hurricanes continue to batter the mainland U.S., witnesses and participants will recall the devastation of Hurricane María a year ago and expose how that is being used by the U.S. in its century-long, continuing occupation and exploitation of the Puerto Rican people

The tribunal has become so compelling that satellite audiences have organized themselves in California to get up bright and early so they can view the livestreamed appearance of so many notable witnesses.

Beginning at 6 a.m. in Los Angeles at the Harriet Tubman Center for Social Justice, breakfast will be available as viewers watch the testimony unfolding on the other side of the continent.

In San Diego, a screening and free brunch are planned at 6443 Imperial Ave. (The zip code is 92114 if you’re searching for directions to get there!) Donations for Puerto Rico relief efforts will be accepted and welcomed. The Brown Berets, Unión del Barrio and Bomba Liberté have been invited to participate. Bomba Liberté is an ensemble of cultural workers in San Diego that performs Puerto Rican and Caribbean song and dance.

Other viewing parties are planned in Austin, Texas; Atlanta and Chicago, with more being scheduled, including in Puerto Rico.

Delegations to witness the tribunal in person are coming from California by air; in cars and vans from North Carolina; from Philadelphia, Boston and Hartford, Conn.; and by public transportation from all corners of New York City.