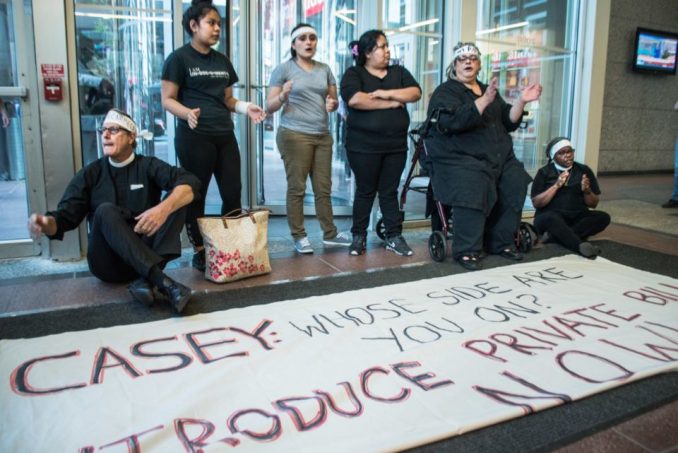 After almost ten months of taking sanctuary in the basement of a Philadelphia church, Carmela Apolonio Hernández was ready to take direct action to stop deportation orders against her family.

On Oct. 10, Hernández and her 14-year-old daughter Keyri risked arrest and possible deportation to visit U.S. Sen. Bob Casey’s (D-Pa.) office. The request to Casey was that he pressure U.S. Immigration and Customs Enforcement to grant a stay of deportation and introduce a private bill in the Senate on behalf of the family.

Hernández refused to meet Casey’s staff in a basement conference room because her family is tired of living “underground, in the shadows.” Once in Casey’s sixth floor office, instead of a plan to alleviate her family’s desperate situation, she was offered candy.

These two refugees were not alone in risking arrest for im/migrant rights. Two Black women and longtime activists, Dr. Wende Marshall, community organizer and Temple University professor, and the Rev. Renee McKenzie of the Church of the Advocate, joined them inside Casey’s office. Other supporters, including Pastor Robin Hynicka of the Arch Street United Methodist Church, also conducted real solidarity by occupying the office with them. Over two dozen people participated simultaneously in the daylong action by occupying the building’s lobby.

After sitting in at Casey’s office for four hours with no satisfactory response from his staff, Hernández, her daughter and eight supporters went down to the building’s main doors. These they blocked with a banner and their bodies, risking arrest again.

Standing before the banner reading: “Casey, whose side are you on? Introduce private bill now!” Pastor Hynicka was arrested first. Cops tried to arrest Keyri next. Hernández yelled, “You’re arresting a child?” The crowd chanted, “Shame on Casey!” and some activists yelled, “Why are counterterrorism police here?” Under the additional glare of media cameras, the cops backed off.

Threatened with arrest and told her daughter would be separated from her in jail — bringing to mind all the children isolated in ICE prisons — Hernández eventually decided to walk away, and her supporters followed suit. She told the crowd: “My daughter did not let me be arrested. Nor did I let her be arrested. … This is not over. I’m going to keep fighting.”

Hernández added: “He [Casey] is fighting for votes. I’m fighting for my freedom, so that my family is well and safe. So that they can stay alive.” (Full statement at tinyurl.com/y85yswa7.)

Hernández and her children — Fidel, Keyri, Yoselin and Edwin — took sanctuary in the Church of the Advocate, a historic Black church in the heart of North Central Philadelphia, on Dec. 13, 2017. “I am taking sanctuary to fight for my family, to protest our deportation orders and the injustices of the immigration system. Everybody deserves to live with dignity and safety,” explained Hernández on her GoFundMe page: https://bit.ly/2CaSUnc.

Hernández and the children were issued a family order of deportation after their asylum petition was denied in 2017 by Judge John B. Carle. He has a denial rate 64 percent higher than the average in the Philadelphia court system.

Should Hernández and her children be deported, their lives would be in imminent danger.

They came to the U.S. in 2015, fleeing the violence of the U.S.-backed drug wars in Mexico. These had claimed the lives of three of her closest family members, and led to physical assaults on Hernández and her oldest daughter.

While Sen. Casey claims he supports the immigrant struggle, he ignored the Hernández family’s request for concrete action for over nine months.

So, after ten months in sanctuary in the church’s basement, Hernández and her daughter Keyri took a chance to confront Casey to stay their deportation and gain the private bill to protect themselves. They left the church with the help of members of the support group, the Sanctuary Advocate Coalition.

Deportations continue to wreak havoc in immigrant communities across the U.S. The Trump administration has increased immigration arrests by 45 percent. The federal administration explicitly targets “sanctuary” cities such as Philadelphia.

The current administration has strip­ped young people, refugees, asylum seekers and other populations from conditional relief programs. Temporary protected status (TPS) and Deferred Action for Childhood Arrivals (DACA), even when applied to their full extent, do not protect the lives of people displaced from their countries of origin by violence and poverty exacerbated by U.S. foreign policy.

Casey and the Democratic Party blame Trump for the dire situation im/migrants find themselves in.

Hernández and the Sanctuary Advocate Coalition, in a Oct. 10 press release (https://bit.ly/2PDtJNG), say, “Blaming Trump is not enough.” They demand Casey use his congressional powers to take actions that would “mean the difference between family separation or unity, and even life or death, for Carmela and her children.”