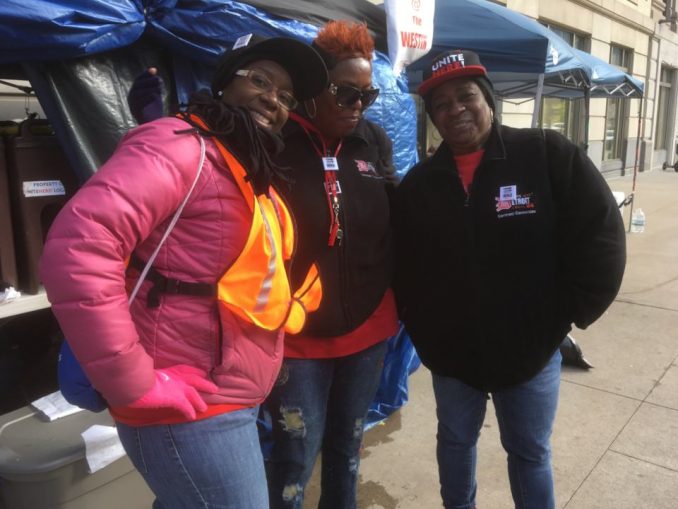 Some 160 hotel workers, including bartenders, servers, cashiers, bellhops, front desk workers and housekeepers at downtown Detroit’s Book Cadillac hotel joined the strike against Marriott on Oct. 7. Since then, members of UNITE HERE Local 24 have been walking the picket line round the clock. Altogether there are over 7,800 workers on strike against the Marriott chain, which operates Book Cadillac.

“I’ve been here for almost nine years. In that nine years, I received a 60-cent pay raise,” bartender David Frasetto told demonstrators at a rally Oct. 9. “That was six years ago. Six years ago!” (Detroit News, Oct. 10)

The theme of the strike is “One job should be enough.” Other union members at the rally explained that the pay at Book Cadillac is so little they have to work a second job. They complained that the Renaissance Center Marriott, tied to General Motors world headquarters, pays its workers $2 more an hour for essentially the same work.

With room rates starting at over $500 a night, this hotel can well afford to pay workers enough money to allow them to get by with just one job.

These Detroit workers are carrying on a long tradition of hotel workers on strike. In 1937, after the victory of the Flint sit-down strike against GM, workers at the Book Cadillac and other swanky downtown hotels won union recognition by employing this militant tactic. The bosses had to post a notice in the newspapers stating that the sit-downs had forced them to close their hotels.

Strikers are determined to stay out until their demands are met.