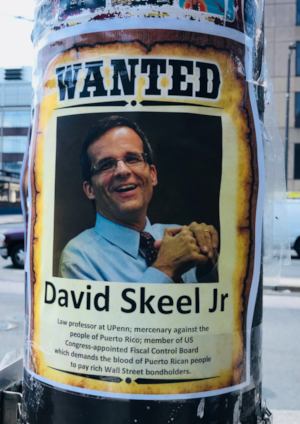 Philadelphia — Hurricanes Irma and Maria devastated Puerto Rico in September 2017. But over a year earlier, in June 2016, President Barack Obama unleashed economic devastation in the island/archipelago when he signed into law PROMESA — the Puerto Rico Oversight, Management and Economic Stability Act. The legislation triggered a new phase in class struggle on Puerto Rico, and eliminated any doubt that it is a colony of the U.S.

In essence, PROMESA is a collection agency to serve Wall Street bondholders. For that purpose, it created a dictatorial Financial Control Board referred to as the “Junta” by Puerto Ricans. The FCB is headed by insurance broker José Carrion III. Board members include Andrew G. Biggs of the American Enterprise Institute in Washington; financier Carlos M. García and banker José R. González, both with connections to Santander Bank; Arthur J. González, retired chief judge of the U.S. Bankruptcy Court for the Southern District of New York; and David A. Skeel, Jr., a professor of corporate law at the University of Pennsylvania.

Skeel, who teaches bankruptcy law, lives and works in Philadelphia.  Philadelphia native Julia Keleher was hired by the FCB to serve as Puerto Rico’s “Education Secretary” despite her lack of education experience. Both have been targeted by a “wanted poster” campaign in Philadelphia exposing their service to rich Wall Street bondholders.

In summer 2018 the wanted posters began to appear on the University of Pennsylvania campus, including one posted on Skeel’s office door.  Demonstrations were held there to call attention to Skeel and Keleher’s roles in the theft of Puerto Rico’s resources.

Skeel responded in a Sept. 13 op-ed piece in the Wall Street Journal. He noted the posters claimed he was a “mercenary” who “demands the blood of Puerto Rican people to pay rich Wall Street bondholders.”

Skeel’s defense? Simply that “PROMESA instructed the oversight board to help ‘achieve fiscal responsibility and access to the capital markets.’”

But the record of Skeel, a legal bankruptcy specialist, shows why the posters describe him as a “mercenary.” In a 2014 Wall Street Journal article, he argued that management of the debt crisis in Puerto Rico could be a test case for attacking workers’ rights. He cited parallels to U.S. states facing similar hardships, such as Illinois, New Jersey, Pennsylvania and cities like Philadelphia.

In the article Skeel noted that, unlike local officials reluctant to make drastic cuts because they are subject to reelections, a board appointed by congressional mandate could get away with attacking public employee unions and cutting programs, jobs and benefits.

He wrote: “There may be a silver lining in these financial clouds.”

So who gets to line their pockets with that silver, obtained through the “restructuring” of Puerto Rico’s debt? The members of the FCB, appointed by the U.S. president and chosen by leaders of the House and Senate, were given broad powers to serve the interest of bondholders, with no accountability to the people of Puerto Rico.

The FCB’s powers include instituting automatic hiring freezes and reducing the minimum wage of workers under 25 years old from $7.25 to $4.25.

Layoffs, cuts in basic services and increases to the cost of living then exacerbated hunger and poverty, worsening after Maria struck. Foreclosures of mortgages on homes and repossessions of automobiles became widespread.

Under the pretext of “stimulating the economy,” the Law of Transformation and Labor Flexibilization, passed in 2017, stripped workers of hard-won gains, including the eight-hour day, while cutting wages, vacation and sick days, reducing bonuses and extending workers’ probation periods.

The passage of the Single Employer’s Law impacted public sector workers by establishing the government as a single employer that could move workers from one agency to another, even to the private sector. Workers who are moved face the loss of protections won under collective bargaining agreements including seniority.

In addition to the draconian attacks on workers’ rights, the FCB also imposed more taxes and increases in fines and tolls across the board, while cutting municipal subsidies and allocations for art, culture and sports programs and programs protecting women.

PROMESA opened the way for the sale of profitable public properties so private capital could grab windfall profits in the millions. Profitable public possessions were bankrupted and sold “at fire sale prices.”

On the environmental front, PROMESA proposed the “transfer” of responsibility for cleanup of massive contamination of Vieques from the U.S. Department of the Interior to the government of Puerto Rico. The pollution on that island municipality came from 60 years of U.S. Navy bombing practice. This plan would limit the Puerto Rican government, the municipality and individuals from claiming damages resulting from contamination from the Navy’s operations.

Other FCB cuts included $1 billion from health care, a 10 percent reduction in pensions, a cut of more than $600 million in the budget of the University of Puerto Rico, and the closure of hundreds of schools under the tenure of Keleher, a consultant paid $250,000 to work as education secretary.

On her “wanted poster,” Julia Keleher is described as a “ruthless mercenary hired to kill public education; proven to be completely ignorant about the Puerto Rican values, culture, history, literature and language of the children under her mandate.”

Hired in January 2017, Keleher introduced an unpopular strategy to close public schools. The local Department of Education budget was cut by half a billion dollars. In 2018 the Junta demanded an additional $200 million in cuts, including $80 million from special education.

Following Hurricane Maria, parents and teachers came together to repair schools and juggle classroom lineups due to many families departing to the mainland. Things were slowly moving back toward normal until Keleher struck. Teachers were laid off, hundreds of schools were closed, and children, including those with special needs, were packed tightly into classrooms.  When they protested these “reforms” in street demonstrations, teachers and students were brutally attacked by police.

A month after Hurricane Maria, Keleher tweeted a recommendation that “islanders use the aftermath of Hurricane Katrina ‘as a point of reference’ and an ‘opportunity to create new, better schools.’ ” Following Katrina, New Orleans fired most teachers, closed almost all public schools and replaced them with charters.

In an October 2017 interview with Education Week, Keleher approved of U.S. Secretary of Education Betsy DeVos’ proposal that Congress waive funding requirements for adult and special education in districts recovering from natural disasters. DeVos had just released funding reduction guidelines for states and regions, including Puerto Rico, and the U.S. Virgin Islands. (tinyurl.com/ycpwq2j7)

The 120 years of U.S. occupation of Puerto Rico will be brought to trial at the International Tribunal on U.S. Colonial Crimes in Puerto Rico on Oct. 27 in New York City. PROMESA will definitely be in the list of criminal activities to be indicted. Testimony will be livestreamed direct from Puerto Rico — from activists fighting against the mercenaries of capitalism like Skeel and Keleher.

Community activists, students and workers in the states Skeel cited should take notice of what he and other FCB members have engineered in Puerto Rico and learn from the protests there since June 2016.  When the FCB held its first conference on Aug. 31, 2016, youth, labor and social organizations demonstrated against PROMESA and blocked access to the conference until police had to clear the way.