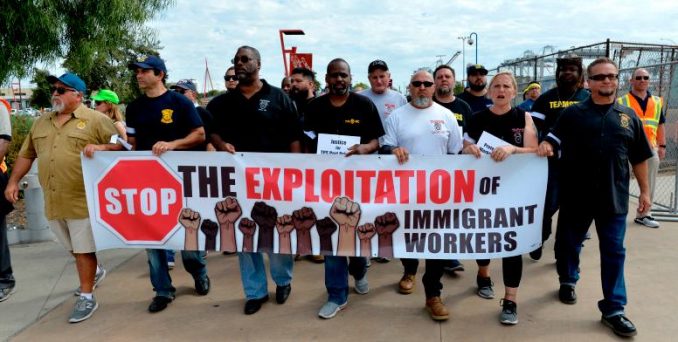 Striking Los Angeles port drivers, organized by the Teamsters union, shut down an entrance to the Metropolitan Detention Center here on Oct. 3. The MDC is a federal prison where U.S. Immigration and Customs Enforcement jails im/migrant workers.

Teamsters drivers rallied at the detention center and, using a caravan of trucks, blocked the MDC’s Aliso entrance, where Occupy ICE had mounted an encampment in the summer. The caravan then went to the ports to join picket lines there and shut down entrances to both the ports and the 110 Freeway, resulting in dozens of arrests by the Los Angeles Police Department.

The striking workers were showing solidarity with im/migrant workers who could be deported if they lose their temporary protected status, currently threatened by the Trump administration. The Teamsters demanded a path to citizenship and an end to racist violence against im/migrant workers.

These port truck drivers were striking simultaneously with warehouse workers at the ports of Los Angeles and Long Beach. The workers are at a major gateway of the U.S. supply chain and know the strategic power their position gives them in labor struggles.

Solidarity in the class struggle

One issue in the port strike is the misclassification of port drivers as independent contractors rather than as the employees and workers that they are. This misclassification is done intentionally by management so that the company does not have to pay benefits and can intensify the existing profitable exploitation of the workers.

John Parker of FIRE (Fighting for Im/migrants and Refugees Everywhere) joined the workers at the detention center. He had just left a court hearing that morning, the result of his arrest at an action shutting down the  detention center for an entire day.

Parker gave WW this statement: “It is a very significant development in the class struggle whenever a union organizes oppressed workers who have been traditionally ignored by organized labor. There is tremendous potential for building unity and therefore strengthening the power of workers everywhere when solidarity with migrant workers includes organizing that powerful workforce into unions.”

Parker continued: “It should be remembered that it was the 2006 ‘Grand Boycott’ on May 1 that forced the ultimate destruction of the racist, anti-immigrant Sensenbrenner bill, HR 4437. That bill had already made it through the House with its Democratic majority, and would easily have passed the Senate. But it didn’t get a chance to get voted on there due to the boycott that cost corporations hundreds of millions of dollars in Los Angeles alone, just that one day on May Day.

“That experience, as powerful as it was, is just a small example of the potential of the general power of workers who are the only force in society creating value-making profits. It should also be remembered that the migrant workers who boycotted on May 1 for the most part were not organized into a union. Imagine their power if they were!”

Parker added: “This effort of the Teamsters also reminds me of the tremendous help they provided during the grocery workers’ strike. The workers were represented by the United Food and Commercial Workers, but the Teamsters showed great solidarity with those workers on strike and coordinated with our International Action Center and UFCW here in Los Angeles to come up with creative strategies involving community forces to put even more pressure on the large food chains.”

Parker concluded: “The future of the union movement lies in continuing this greater cooperation with the community and the unorganized migrant workforce.”