The U.S. Postal Service is once again under attack. In August, the White House Office of Management and Budget proposed totally privatizing the public postal service. The American Postal Workers Union moved quickly at its national convention Aug. 20-23 to counter this attack, which would seize $70 billion in USPS public revenue for private profit. This would eliminate services and kill thousands of well-paid union jobs, many of which are filled by African Americans and women.

This is not the first time an attack has been launched on the USPS. A move to cut jobs by shifting postal services to Staples was started in 2013, but the struggle by postal unions stopped it.”

Anti-worker Trump has called USPS’ current business plan “unsustainable,” pointing to debt caused by $5.6 billion yearly prepayment of future retirees’ health care costs imposed by Congress in 2006. Without that mandate, unique to USPS, the Postal Service runs in the black. The APWU stresses that the system does not receive taxpayer funds, employs more than 500,000 workers, plays a critical role in the growing ecommerce industry and enjoys high favorability ratings. In addition to eliminating the prepayment mandate, one solution APWU and two other postal workers’ unions offer is to have the USPS resume postal banking, available during World War II.

APWU President Mark Dimondstein noted that “privatization threats are not new. But we have never faced outright plans to sell the entire Post Office. … Postal privatization is about the profits of a few at the expense of the many — period!”

A North Carolina federal court ruled Sept. 8 that a 2017 law Gov. Roy Cooper signed, which stripped the Farm Labor Organizing Committee of the right to automatically collect dues from farmworkers’ paychecks, was illegal.

FLOC, in unity with the Southern Poverty Law Center, the American Civil Liberties Union, as well as two individual farmworkers charged that the North Carolina Farm Act of 2017 discriminated racially since it targeted Latinx workers, who make up 90 percent of North Carolina farmworkers. (Payday Report, Sept. 20)

This is a paramount victory. Because North Carolina is a “right-to-work” (for less!) state, only individual workers can choose to have dues deducted. Because many FLOC members are guest workers who lack access to bank accounts, credit cards and other means of paying union dues regularly, they rely on dues transfer arrangements.

“We’re happy that the federal court saw clearly that this racist law was an effort to stop farmworkers from having the resources to fund their own institution and fight for a more fair workplace,” said FLOC President Baldemar Velásquez. (ACLU of NC, Sept. 20) 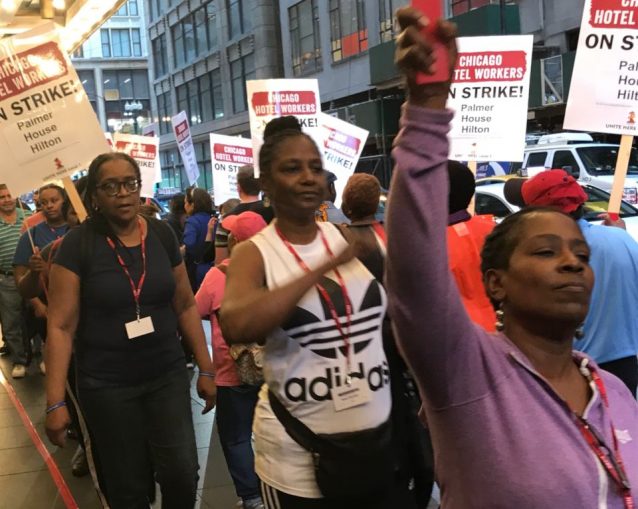 ‘They work us like dogs when it’s busy and then kick us to the curb in the winter.’

After nearly a month on strike, hotel workers at 17 out of 26 hotels in Chicago had ratified contracts by late September. In addition to higher wages and healthy working conditions, the primary issue, which galvanized more than 6,000 service workers represented by UNITE HERE Local 1, was having year-round health care coverage. It’s lifesaving during winter months when the tourist season is slow and workers are often laid off. As one worker told ThinkProgress: “One of the reasons the strike is so broad is because access to health care is an issue everyone can rally behind.” (Oct. 3)

This hotel strike is the first in decades in Chicago’s history and the first to hit all hotels with unionized workers in all service jobs — cooks, dishwashers, housekeepers and door attendants — at the same time. The workers held a number of joint actions during the strike, with hundreds marching down Michigan Avenue’s “Magnificent Mile” on Sept. 13 and rallying at the Hyatt Regency Chicago on Oct. 1.

Local 1 has repeatedly pointed out that Chicago hotels have been doing well financially, with a record number of visitors and $2.3 billion in revenue last year. As of Oct. 8, workers at only two hotels still have not ratified contracts. (chicago.curbed.com)