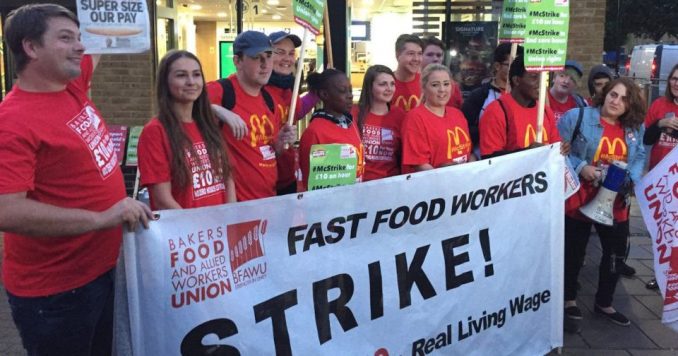 Low-wage workers at four companies in the retail and hospitality industry, sick and tired of being exploited on the job, staged a coordinated one-day work stoppage on Oct. 4 in six cities in England; Cardiff, Wales; and Glasgow, Scotland.

They struck McDonald’s, TGI Fridays and JD Wetherspoon, demanding a $13.12 hourly minimum wage, union recognition and an end to precarious contracts. UberEats drivers joined, insisting on payments of $6.55 per delivery and another $1.31 for each additional mile they must travel per assignment.

The strikers were backed by the Bakers, Food and Allied Workers Union, labeling the fast food action a “McStrike,” and calling the walkout at JD Wetherspoon pubs a “Spoon’s strike.” Unite the Union, known as “Unite,” which has 1.2 million members, and War on Want helped build the work stoppage. Momentum, a Labor Party organization, set up picket lines at McDonald’s eateries.

This is a youth-led movement, and it was inspired, in part, by the Fight for $15 an hour movement of low-wage workers in the U.S. Many strikers are young workers and students; many are members of immigrant communities. They are challenging the exploitative conditions of their employment — low-wage jobs lacking benefits are their only options. Only 8 percent of workers under 25 are unionized. Their weekly wages are abominable, while company executives roll in luxury, with exorbitant salaries and bonuses. The strikers were challenging the essence of capitalist profitmaking on employees’ backs.

Boni Adeliyi, age 21, works days and nights at three jobs, including one at TGI Fridays. She explained that she was striking because the higher minimum wage would allow her to “focus on one job.” Her Unite membership gave her a “sense of safety and confidence [she] never had before,” reported the Oct. 4 Guardian newspaper.

This is the eighth 24-hour walkout by Unite members employed by TGI Fridays against a change in its tip policy. Strikers say the company is pocketing their tips and ignoring their complaints.

Trade Union Congress General Secretary Frances O’Grady spoke at the London rally at Leicester Square. She told the media that the actions are “growing and spreading,” adding, “What I find really touching is that these are workers from different companies coming out to support each other.” (Guardian)

A key struggle is over zero-hour contracts, where companies refuse to guarantee workers a minimum number of working hours, making it impossible for them to pay bills. O’Grady stressed that wealthy transnational companies “have deliberately put their workers on contracts that keep them scared. If you are on a zero-hours contract, they don’t have to sack you; they can just stop offering you shifts.”

But many workers flouted their employers and walked out of their workplaces despite the risks, joining other strikers in a show of solidarity. This collective action boosted the morale of these workers and reinforced their determination to keep up the struggle for their rights and those of other workers.