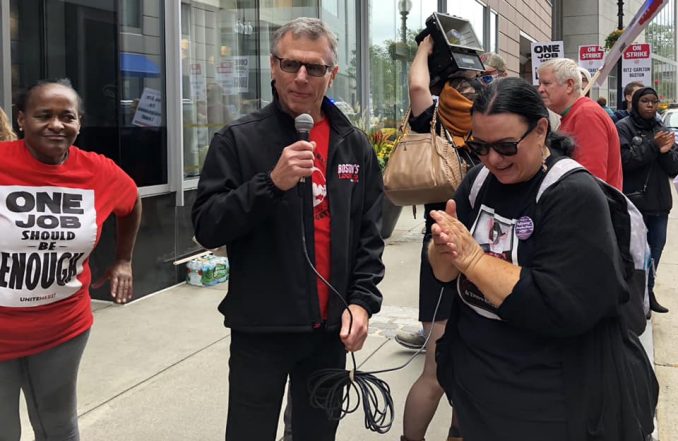 This is an unprecedented national coordination by the union and for the whole working class against a behemoth that has obtained a new property every 18 hours by buying out dozens of hospitality companies around the world — from big chains like Sheraton and Westin to smaller brands and independent operations.

Since the purchase of Starwood and Protea, Marriott now owns 136 hotels in Africa and is constructing 65 more, for a total of holdings in 27 countries on the continent. Stateside, Marriott is out to bust the union and, like the Trump Organization, is the face of a complicated network of financiers and corporate interests that are mostly unknown to the public.

When housekeepers, cooks, bartenders and bellhops hit the picket line on Oct. 3, they knew there was much at stake. Marriott wants to outsource food service. Its deceptive “Green Choice” housekeeping program encourages guests to decline services, meaning fewer hours for workers. But in the end, they are cleaning dirtier rooms and getting more injuries, on top of seasonal layoffs during nonpeak months when their health insurance can be cut off.

And as the union’s campaign slogan, “One Job Should Be Enough,” suggests, the pay for workers isn’t enough as it is. According to Business Insider, the U.S. Labor Department reported in July 2017 that 7.6 million workers had to hold multiple jobs the month before. Hotel workers are barely able to pay for rent, food, daycare and health care, and often cannot make ends meet.

Meanwhile, Marriott International’s income more than doubled to $1.37 billion between 2013 and 2017.

Ed Childs, chief shop steward for UNITE HERE Local 26 at Harvard University, told Workers World: “UNITE HERE’s national intervention against this accelerating acquisition machine has required a decade of organizing to align contract negotiations and prepare workers for the historic struggle of ten locals striking at once. Marriott wants to take [its] scheme to the world, making it a problem for the whole working class, but the union is also making international alliances.”

Childs continued: “UNITE HERE has to win this struggle. The loss of this battle would be another blow to the union movement following several others. Janus v. AFSCME, the Supreme Court decision over the summer that effectively defunded the largest union in the U.S; right-to-work laws passed in former labor strongholds like Wisconsin and Michigan in the last few years that Wall Street and Washington want to see nationalized; and the attacks on immigrant union members through the termination of temporary protected status — these are a few of the weakening blows that have been aimed at our movement. UNITE HERE realizes unions face a national struggle for survival in addition to the fight to protect the standard of living for hotel workers.”

Solidarity from other unions has been extremely strong. Boston’s Teamsters have refused deliveries to striking hotels, and that will have a huge impact. Everything from food and alcohol to laundry and garbage depends on truck drivers.

When the New York Yankees crossed Boston hotel picket lines this week and then lost to the Red Sox, their bitterest rivals, the mood at the baseball games and in the press exposed increasing class consciousness. The Yankees were publicly denounced as scabs.

Then on Oct. 6, the annual march of Boston’s Indigenous People’s Day brought a crowd of 150 to triple the size of the hotel workers’ picket at the Ritz Carlton.

Childs emphasized: “This struggle shows the necessity of unity at this time. While the ruling class makes it difficult to see who is funding these attacks, how companies like Marriott are able to get so powerful, people are recognizing the danger. And unions, youth and community movements are uniting.”

With optimism, he added: “The life or death fight against Marriott has brought big, needed advancements to class consciousness in this country that could lead to victory for UNITE HERE and the whole working class.”