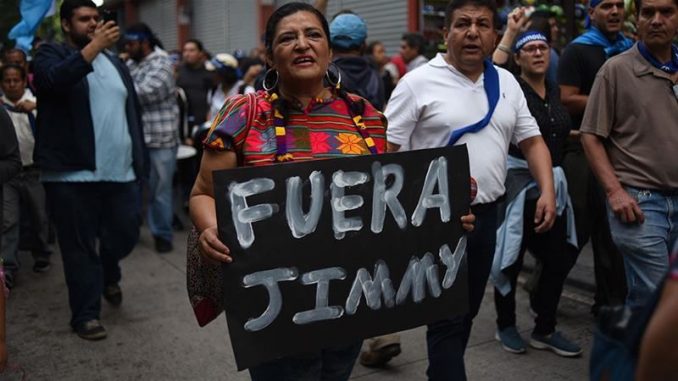 Sept. 23 — Big protests have rocked Guatemala in recent weeks against the decision of the Jimmy Morales government to suspend the International Commission Against Impunity in Guatemala (CICIG) and to bar the Colombian head of the commission, Iván Velásquez, from re-entering the country.

Popular mobilizations culminated in protests in several municipalities and universities, at celebrations of national independence and in a general strike on Sept. 20.

The CC blocked Morales’ attack on the CICIG, holding decisively that the CICIG as an international institution could not be unilaterally suspended.

The so-called “Pacto de Corruptos” — the corrupt gang in Congress who represent reactionary oligarchs and the military — has morphed into a “Pacto de Golpistas” — coup plotters. Morales announced that he will not obey illegal orders, declaring that he will govern according to his own concept of legality.

The CICIG and Latifundismo  (the rule of the landlords)

Following its independence in 1821, Guatemala became part of Mexico until 1823. Like other Latin American nations developing in the shadow of the dominant U.S. and European powers, Guatemala has been governed by dictators, “caudillos,” who were creoles of Spanish descent or mestizos of mixed origin.

The United States has intervened in Guatemalan politics since the days of the Monroe Doctrine in the early 1800s. Washington trained and funded the right-wing military which committed genocide against hundreds of thousands of Mayan Indigenous people, who, with the peasant movement, supported the left during the Civil War between 1960 and 1996.

For centuries creole oligarchs had stolen the lands of the Mayans to create huge plantations where the Indigenous peoples were virtually enslaved, producing sugar, coffee and bananas for the international market.

Military dictatorships protected the great landlords (latifundistas) who used the public treasury as their bank account.

The CICIG was installed by the United Nations in 2007 to combat corruption. Since its inception, the CICIG has been promoted by foreign powers, including the United States. The commission fights corruption primarily to create “stability,” which imperialism now requires in the region. The imperialist powers demand a favorable environment for capitalism and want to stop migration to U.S. border states.

To fight corruption, the CICIG must confront the worst elements of Guatemala’s ruling class: the military and politicians who commit genocide against the Mayan peoples.

The CICIG is not empowered to solve the country’s fundamental social problems, such as latifundismo (the rule of the landlords), racism or assassinations of Indigenous leaders. Rejecting the alternative of a return to military dictatorship, the popular movement has stood up to defend the existing weak institutional system.

Class differences in the fight against corruption

International communications media compare the mobilizations of recent weeks to those of 2015 that ended the government of Otto Pérez-Molina, the former corrupt servant of the oligarchy and the transnational corporations. The urban middle classes, fed up with the shameless theft of public funds, were the driving force in the 2015 movement.

Today it’s the peasants, mainly Indigenous peoples, students and urban workers, who are in motion. Indigenous groups took the initiative. The Sept. 10 mobilization was called by the Mayan Kaqchikel population of Sololá; that of Sept. 11 by the Mayan K’iché people; and one on Sept. 12 by the Committee for Peasant Development. The various Mayan peoples and CODECA (Campesino Development Committee) filled the streets during the general strike and the protests on Sept. 15, which is Guatemala’s Independence Day.

The 2015 movement aimed at removing a corrupt president, but did not seek fundamental change in Guatemalan society. This resulted in replacing one corrupt president with another. This movement did, however, create an opportunity for popular resistance to grow and continue the fight for basic human rights: land for peasants, better wages and social services.

CODECA and others are calling for a Popular and Plurinational National Constitutional Assembly as a way to advance the demands of the Guatemalan people.

This assembly would make five fundamental changes to the Constitution and the Electoral Law. The most important are setting limits on salaries of public officials in relation to the overall minimum wage, requiring consultations at the community level for approval of laws — and what most threatens the power of the oligarchy — political power with democratic representation for the 22 nationalities within Guatemala.

Before it goes into operation, it won’t be known whether the Popular and Plurinational National Constituent Assembly is the solution to the challenges faced by the peoples of Guatemala. But what’s certain is that in order to overcome the conditions that the country is now suffering, it is necessary to break the monopoly of power exercised by the oligarchy.