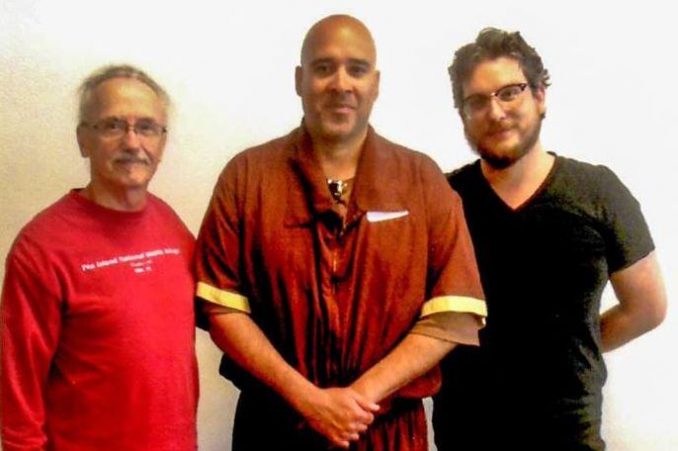 “I am going to boycott the third-party correspondence system,” Bryant Arroyo, an activist and organizer currently detained at SCI Frackville in central Pennsylvania, told this WW reporter during an extended Sept. 23 interview.

Eliminating the right of prisoners to send and receive correspondence via postal service is the most controversial aspect of a sweeping crackdown imposed in September by the Pennsylvania Department of Corrections. Prisoners will no longer be allowed to receive mail directly at state correctional facilities. Instead, their mail is being routed through a third-party company that rakes in profits from the enslavement of U.S. workers.

The PDOC awarded a $4 million contract to Smart Communications, a Florida-based firm that bills itself as a “family-owned business” with “a reputation as the true innovator in the prison marketplace.”

Under the contract, Smart receives all letters and photographs, photocopies them, stores the contents on its private servers and then forwards the photocopies to prisoners. Smart’s website boasts, “We currently have over 50 clients worldwide.” That means the company is paid to seize, open and duplicate the private correspondence of prisoners held in over 50 U.S. facilities. Pennsylvania is the 19th state to hire the company.

“I have other means of communication,” said Arroyo, referring to the phone calls and emails he must pay for in order to talk to the outside world. “I don’t have to comply with this policy, and I don’t want to. I don’t think our people should be subjected to it. And I don’t think the taxpayers’ money is being well spent — do you?”

Bryant Arroyo has a long history of activism defending the rights and well-being of his fellow inmates. This has made him great friends and powerful enemies. In 2006, he organized a campaign of prisoners that scuttled plans to build a $400 million coal-gasification plant next to SCI Frackville — a plant that would have poisoned the environment around the prison and the nearby community.

This organizing earned him the ire of the head of the anthracite coal cartel, Jack Rich, and his corporate backers, like former Pennsylvania Gov. Tom Ridge and the South African energy company Sasol. The successful movement also led political prisoner Mumia Abu-Jamal to dub Arroyo “the world’s first jailhouse environmentalist.”

‘When you’re backed into a corner, you fight to live’

Now Arroyo’s focus is on the PDOC crackdown implemented in the middle of the nationwide prison strike that took place from Aug. 21 to Sept. 9.

“Big Brother has invaded the DOC. We don’t have rights in here, “ Arroyo explained to WW, “only privileges.” Even the right to unfettered legal defense can be capriciously suspended without warning by state authorities. But Arroyo is intent on fighting for restoration of the precious few resources prisoners have to defend themselves: “This is survival mode. When you’re backed into a corner, you fight to live.”

This is why he is urging prisoners to boycott the mail. Arroyo’s boycott announcement comes as the American Civil Liberties Union and many public defenders have announced their intention to stop sending legal mail through the Pennsylvania prisons.

“Every prisoner must act as an individual and as a collective front not to send mail to the third party,” he said. “This is not only a breach of our privacy but a breach of attorney-client privilege.”

Under the Smart system, all supposedly protected correspondence pertaining to prisoners’ legal cases is handled — and opened — by prison staff. Copies are made and given to prisoners, but the originals are retained by the PDOC for 15 days, after which they are allegedly destroyed. Regular personal correspondence is stored on Smart servers for seven years. Video recordings of the mail-opening process are supposed to be purged every five days.

“But [the purging of legal correspondence] is a flat out lie,” said Arroyo. “What they’re not telling you is that they’re keeping it. And they can use it against you at any point in the future.”

The Innocence Project, the Abolitionist Law Center and the Pennsylvania Institutional Law Project are partnering with the ACLU to bring a lawsuit against the PDOC for this unprecedented attack on attorney-client confidentiality, which they say is “indefensible.”

In the meantime, Arroyo urges his fellow inmates to follow his lead in communicating with legal teams and only set up urgent face-to-face visits: “Everything except in-person contact is compromised.”

Arroyo said the first piece of mail he received after the new policy began was a card that came in the form of photocopied sheets of paper: “It was lifeless. It takes away the joy of receiving mail.”

Arroyo also described the for-profit firm’s predictable failure to fulfill its contract. One inmate received a sheaf of papers that had photocopies of the front and back of an envelope — and the rest of the pages were blank.

“They don’t want us to smile in here,” he said.

The for-profit privatization of the prison mail system is having a deadly, chilling effect on prisoners’ legal right to private correspondence with their defense attorneys and on their much-needed human contact with the outside world.

The prison crackdown is meant to exacerbate the breakdown of social ties caused by mass incarceration. Some friends and family are understandably scared to put themselves at the mercy of prison officials at a time of such intense repression.

The day Arroyo called for the mail boycott, an older couple who came to visit a man’s brother was turned away because the woman was wearing a bra with a small metal clasp, which set off a metal detector.

“It’s straight-up sexual harassment,” he commented to WW. The “no-bra” policy is apparently unique to SCI Frackville and reportedly not in force at other PDOC facilities.

The PDOC crackdown also included a punitive 90-day suspension of commissary food during visits. Friends and family are usually permitted to purchase from vending machines in the visiting room. Now a row of six machines stands completely empty at the back of the room. “We literally can no longer break bread with our community,” said Arroyo.

Visits with children are necessarily shorter when parents and guardians can’t buy them snacks. Without access to vending machine drinks, visitors are also subjected to the same water that prisoners are forced to drink, with little kids hoisted up to toxic water fountains to quench their thirst. The guards and prison staff still have access to bottled spring water and soda.

Many Pennsylvania prisons, including Frackville and Mahanoy in Schuylkill County, are situated in a coal mining and fracking region that has become known as a “cancer cluster” site. Arroyo points out that Schuylkill has a remarkably high incidence of polycythemia vera, a rare blood cancer caused by waterborne pathogens.

Arroyo calls these health risks from the prison system “environmental terrorism.” He himself is awaiting a second round of throat surgery to remove polyps growing on his vocal cords. He is confident these are the result of 25 years of drinking poisoned water in Pennsylvania prisons.

In the prison lobby, this reporter also witnessed two toddlers being subjected to the magnetic wanding and swabs meant to detect trace residue of narcotics, the same security protocols required of adult visitors.

When Arroyo’s daughter called to plan a visit with her small children, he was compelled to tell her to wait until the punitive three-month visitor policy expires. “I’m not going to subject my grandchildren to this.”

Democrats lead the crackdown on prisoners

Pennsylvania Gov. Wolf is just one of many new law-and-order Democrats who display a ruthless dedication to expanding the system of mass incarceration. This reactionary cadre includes Philadelphia Mayor Jim Kenney and District Attorney Larry Krasner, as well as national figures like former California chief prosecutor Kamala Harris, now a U.S. senator from the state.

Wolf also steadfastly refuses to hear demands from im/migrant rights activists demanding he issue an emergency order to close Pennsylvania’s Berks Family Detention Facility, which is under contract with U.S. Immigration and Customs Enforcement. Other immigrant and refugee concentration camps across the country are among the 50 facilities that Smart counts as “clients.”

ICE kidnappings, imprisonment and rampant abuse are defended under the guise of “national security.” Similarly, Wolf’s strategy is to tie the crackdown on prisoners to “security and safety” in state facilities, creating a strong obstacle to efforts to fight recent prison repression in the courts.

Additionally, a poorly fabricated “health crisis” among prison staff was the apparent excuse for an August lockdown. But staff accounts of being sickened by synthetic drugs transmitted through the mail system collapsed under public scrutiny.

Arroyo notes that the PDOC appears to have concocted the “health crisis” to justify smothering prison strike efforts in Pennsylvania, which coincided with the national strike Aug. 21 to Sept. 9.

The emergency lockdown was implemented in late August. After the Labor Day weekend, the omnibus prison regulations were already being implemented, including a more repressive visitor policy estimated to cost the state an additional $15 million to put in place.

Meanwhile, the commonwealth of Virginia under Democratic Gov. Ralph Northam has announced a similar set of repressive measures for its prisons. Warden David Call of Nottoway Correctional Center in Burkeville, Va., released a Sept. 20 memo that referred to “feminine hygiene products being an ideal way to conceal contraband.” In an outrageous move that mirrors the Frackville “no-bra” policy, he declared that “the use of tampons and or menstrual cup hygiene items during visitation are prohibited.” (Richmond Times-Dispatch, Sept. 24)

Gov. Roy Cooper of North Carolina, another Democrat, failed to evacuate prisoners held in state facilities even as Hurricane Florence wreaked havoc across the state.

Fight repression, ‘don’t give up’

Arroyo insists that we must see prisoners as individual human beings to fuel needed collective action. Millions of people are incarcerated in this country, which means millions more family members and friends are affected by this system. He urges his fellow inmates to continue to fight and to find people on the outside who will actually listen, not just cynical aspirants to elected office. Above all, he urges prisoners across the country not to give up.

Arroyo himself is an innocent man who has been sentenced to life in prison for a crime he did not commit. He says: “I could be bitter. But I choose not to take that path. Nah, that’s not what I want. They want you to mess up so they can put you in the hole. I don’t give them that privilege.”

Of his beloved daughter, Genesis, he says he “raised her through the confines.” This summer he condensed a lengthy essay he wrote, “A Dad’s Honor, a Daughter’s Dream,” and managed to get it down to 15 minutes. Then he called Genesis’ wedding ceremony and read it as a toast to his daughter.

Despite this particularly trying time of reaction and repression, Bryant Arroyo retains his optimism through one of his most contagious tactics: a sense of humor.

“You’ve heard the tune that goes, ‘Video killed the radio star’?” he asks, breaking into song. “Well, the DOC killed the mail!”