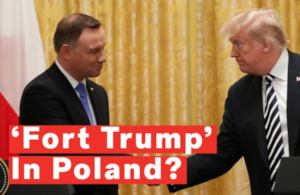 Poland’s president, Andrzej Duda, visited the White House on Sept. 18 for a photo op with President Donald Trump and to make an offer. His government will chip in $2 billion if the United States agrees to build a military base named Fort Trump in Poland, cementing Poland’s allegiance to NATO and helping Poland confront Russia.

This offer and the picture of President Duda standing with a grin on his face while the stern-faced U.S. president was seated drew a storm of criticism in Poland.

Barbara Zdrojewska, a Polish senator from the Civic Platform, the major opposition to the ruling Law and Justice Party, tweeted: “President Duda decided to take advantage of Trump’s vanity and came out with this Fort Trump … blurting it out during a news conference in front of half of the world was pathetic. He humiliated himself, us and Trump.”

Another leader of the Civic Platform, Tomasz Siemoniak, a former defense minister, tweeted: “What an embarrassment in front of the entire world!”

While the Civic Platform traditionally has supported Poland’s participation in NATO, Donald Tusk, president of the European Union’s executive council and  a former prime minister from Civic Platform, has been a vocal critic of Trump since taking up his European-wide post. (There was a smaller, but explicitly anti-NATO demonstration in Warsaw this past May when the NATO council was meeting in Warsaw.) Both the Civic Platform and Peace and Justice are hostile to Russia’s position in Eastern Europe, but they have major tactical differences. They also disagree sharply over Poland’s role in the EU.

President Duda was quoted on the Polish website Hlavy Spravy as claiming that all this criticism, these attacks and mockery are a sign of the success of his visit.

Tens of thousands of public workers, organized by the All-Poland Alliance of Labor Unions (OPZZ) and the Union of Polish Teachers (ZNP), came out on the streets of Warsaw on Sept. 22. “We’ve had enough of living on 1,500 zloty ($410) [monthly], our families are starving,” said OPZZ head Jan Guss to 20,000 workers gathered in front of Prime Minister Mateusz Morawiecki’s office.

The ZNP held a separate demonstration of over 10,000 protesters the same day to demand a hike in teachers’ salaries by the equivalent of $270 a month and the dismissal of Education Minister Anna Zalewska.  The teachers marched, carrying banners with “We want to earn with dignity! Now!” “Zalewska’s reform hurts children” and “Zalewska’s reform harms teachers.”

The head of the  ZNP, Sławomir Broniarz, pointed out that Polish teachers are at the very bottom of teachers’ salaries in the EU and that this raise would keep more teachers in the profession. (Poland in English, Sept. 22)

Both these demonstration raise the implicit question: If the Polish government has $2 billion to pay for a U.S. base and billions more to subsidize it in the future, why doesn’t it have the money to pay public service workers and teachers more?