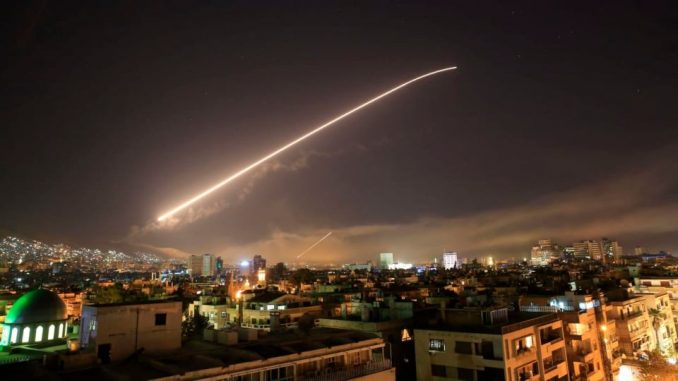 The U.S. airstrike on Syria on April 14 was visible from many parts of Damascus, the country’s capital.

Syrian government troops, with the support of Russian and Iranian forces, have prepared to retake the province of Idlib in northwestern Syria, the last bastion of the reactionary forces that have been trying, with the aid of the U.S. and other NATO powers, to overthrow the Damascus government. Washington and its allies have threatened military strikes. The following article, by journalist Karin Leukefeld, was published in the Sept. 15 edition of the German daily newspaper Junge Welt and translated by Workers World Managing Editor John Catalinotto.

German Foreign Minister Heiko Maas met with his Russian counterpart Sergei Lavrov in Berlin on Sept. 14. While the official occasion for the visit was a German-Russian economic forum, most likely their meeting was focused on the situation in the Syrian province of Idlib.

In the lead-up to the meeting, Lavrov told the German Press Agency (dpa) that he was prepared to coordinate the Astana process led by Russia, Iran and Turkey to end the war in Syria with the “small Syria group” to which the U.S., Britain, France, Jordan, Saudi Arabia and Germany belong. Once again [Lavrov] called on Berlin to cooperate in the reconstruction of Syria.

The German government makes participation in the financing of reconstruction dependent on a “political solution” in Syria, as Maas informed the dpa. According to Maas, the aim is to prevent a “new humanitarian catastrophe.” Russia would play a “key role” in this.

Maas did not address whether the foreign and defense ministries in Berlin would take part in a possible military “retaliatory strike” against Syria. The U.S., Great Britain and France are already preparing such a renewed aggression. The pretext for this is again the alleged plan to employ poison gas in Syria.

In the past, the government in Damascus has regularly been held responsible for such attacks, although there is no conclusive evidence to support it. Syria has repeatedly rejected the allegations. Russia, too, argues that the Western-backed combat units want to stage a poison gas attack in Idlib to provoke a Western military strike.

British Labor Member of Parliament [and shadow Foreign Secretary] Emily Thornberry called this week for an independent investigation of suspected chemical-weapon deployments in Syria before London takes part in an attack. The U.S. envoy for Syria, James Jeffrey, on the other hand, said there was “plenty of evidence” that Damascus was preparing an attack with chemical weapons.

France’s foreign minister, Jean-Yves Le Drian, stated that a military offensive on Idlib could scatter “many terrorists.” Among the up to 15,000 jihadists were many of French origin. The Syrian offensive is “a risk for European security,” Le Drian told the French television station BFM.

The offensive planned by Syria is directed against the Islamic State [group] and al-Qaida-related groups that have been militarily controlling Idlib since 2012. While the United Nations states that there may be about 10,000 troops from these groups there, the successor organization of the Nusra Front — Haiat Tahrir Ash-Sham (HTS) — listed as a terrorist organization, states that it has more than 30,000 fighters at its disposal.

Local elections are scheduled for Sunday in Syria. This will involve filling the local political offices that were introduced in 2011. Around 35,000 candidates compete on two lists. The “list of national unity” is drawn up by the ruling Arab Socialist Ba’ath Party, but may also include members of other parties. On the second list there are independent candidates.