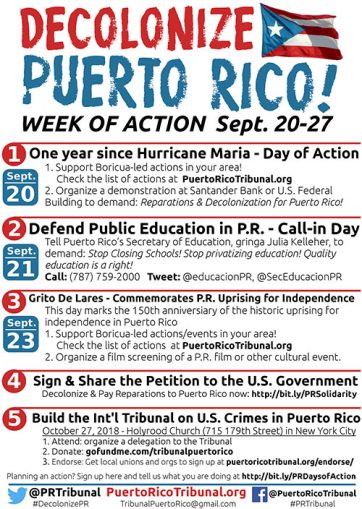 As the current resident of the White House stokes anger by continuing to minimize the growing Puerto Rican death toll from Hurricanes Maria and Irma, organizing grows to put the U.S. on trial for 120 years of colonial crimes in Puerto Rico. The International Tribunal for this purpose convenes at Holyrood Church/Iglesia Santa Cruz in New York City on Oct. 27.

A national Decolonize Puerto Rico week of actions supports the aims of the Tribunal through organizing solidarity with Puerto Rican events marking the first anniversary of Hurricane Maria on Sept. 20 and the first Puerto Rican uprising for independence, Grito de Lares, on Sept. 23.

A day to defend Puerto Rican public education is scheduled on Sept. 21, with a massive call-in to Puerto Rico’s Secretary of Education Julia Keleher (787) 759-2000 or tweet: @educacionPR, @SecEducacionPR.

All are encouraged to support the Tribunal throughout the week beginning Sept. 20, and then continue to the Tribunal on Oct. 27. Supporters are urged to sign and share the Decolonize and Pay Reparations to Puerto Rico Now petition at bit.ly/PRSolidarity.

The people of Puerto Rico have struggled for independence since the El Grito de Lares uprising on Sept. 23, 1868 — 150 years ago. The U.S. branded the Puerto Rican people with official citizenship that obscures the actual colonial status of the Borinquen peoples. This distances them from solidarity with the struggling peoples of Latin America and the Caribbean, and divides them from the struggles of the im/migrant communities in the U.S. because on the surface Puerto Ricans “have documents.” Hurricanes Maria and Irma one year ago stripped away this falsehood and opens the way to organized solidarity with the people of Puerto Rico.

These conveners are supported by a growing list of endorsers and supporters who are listed on the website: PuertoRicoTribunal.org. A downloadable sticker for the Tribunal is also available there.