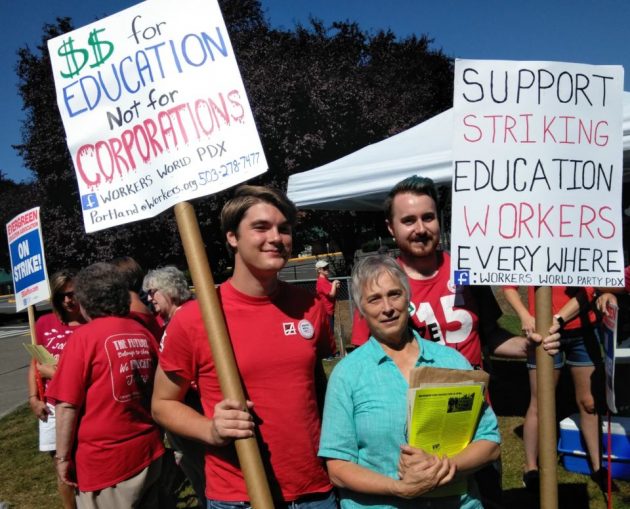 Members of the Portland, Ore., branch of Workers World Party join striking teachers on the picket line in Vancouver, Wash.

Seattle — Education workers’ strikes in this state continue. Some 2,600 teachers in Tacoma, Wash., walked out on Sept. 6. Thousands of teachers in the Washington Education Association are on the picket lines across the state to impact the allocation of $2 billion in state funding won by teachers after a protracted court struggle.

The Washington state strikes are also a show of strength after the U.S. Supreme Court’s Janus decision, which declared that government workers can’t be required to pay union dues. Educators here have been energized by the Red for Ed workers’ movement in many states.

In 2012, the state Supreme Court ruled in favor of the WEA in the McCleary decision, which was supposed to make $2 billion in funds available for education. The money was to cover salaries, staffing for special programs, classroom sizes and other needs. The court found that public schools in Washington state were greatly underfunded. Reactionary state legislators dragged their feet on implementing the ruling for years.

Now, though the funds are being made available, the implementation is such that school districts are being given different funding allocations. The intent by the state seems to be to pit teachers in different districts against each other, in order to prevent educators from going out on a statewide strike.

WEA locals have demanded that their labor contracts be reopened to provide increased wages for overworked teachers. Due to strikes and strike threats, many WEA locals have won wage increases of 18 percent.

But in Seattle the teachers and staff received only a 10.5 percent pay increase in a one-year contract. The district took a hard position against any further increases. This is in a city where rents went up by 13.5 percent in 2017, according to Adobo, an apartment rental site. However, members of the Seattle Education Association gained a full contract, with progress made in several areas besides wages, so they voted not to strike.

Meanwhile, after difficult negotiations, educators in Tacoma are being offered only a 3.1 percent wage increase.

The Tacoma and Seattle experiences expose that the state has given more to some districts and less to others. For instance, in the Seattle area, many suburban districts have gained 20 percent wage increases without striking.

The state legislature has used complicated formulas to increase funding for schools, while capping the amount that teachers can receive from local property tax levies. Because of this, schools in working-class Tacoma lost $30 million due to a recent $70 million property tax levy that voters approved in February.

The legislature’s sleight-of-hand allocation formulations are pitting teachers in different districts against each other as workers in an attempt to undermine worker solidarity.

While the state’s underhanded methods of funding are blatantly discriminatory and another grave injustice to public education, the struggle of education workers across so many communities may ultimately lead to greater unity for a statewide struggle.