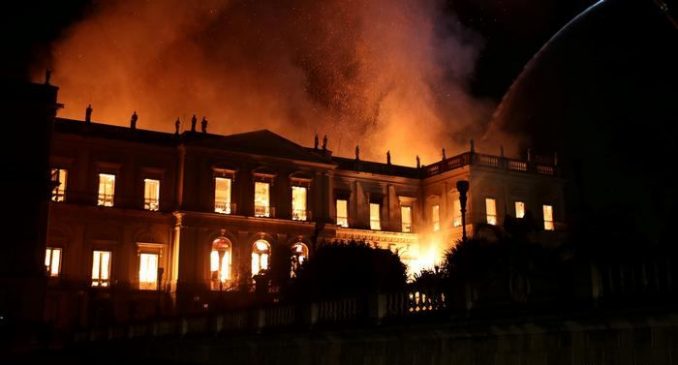 Sept. 10 — As Brazil heads for the first round of its presidential and national assembly election on Oct. 7, three dramatic events are shaking this massive country. Encompassing nearly half the land area of South America and more than half its people, Brazil has the biggest economic, diplomatic and military weight of any single country on the continent.

The first event was the Aug. 31 decision to forbid Luis Inácio “Lula” da Silva, an historic leader of the Workers Party (PT), from running in the election. Lula is in prison for alleged corruption — a pretext used to keep him from running. The real reason Brazil’s ruling class wants to keep him out of the election is that he has been getting about twice the support of any other single candidate in opinion polls, and could again be elected president.

Lula led Brazil’s government for eight years, winning two terms in 2002 and 2006, followed by PT’s Dilma Rousseff in 2010 and 2014. During the governments of Rousseff, and even more so with Lula, government programs improved the living conditions and standards of tens of millions of the poorest of Brazil’s 210 million people. Partly for this reason, PT candidates were elected and Lula became the most popular political figure.

Despite the PT’s compromises with right-wing parties and Brazil’s capitalist bosses, the ruling class maneuvered to rid themselves of this social democratic party and make a frontal attack on Brazil’s working class. They targeted any gains made by Black people, women and Indigenous peoples during the PT period. This led to the illegal impeachment of Rousseff on phony charges regarding the federal budget, which finally removed her from the presidency in August 2016 in what many call a “parliamentary coup.”

This government also aligned its foreign policy closer to Washington and was openly hostile to progressive governments in Venezuela and Bolivia. Temer quickly lost support of all but about 5 percent of the population in opinion polls.

Fearing that Lula would win the coming election and bring the PT back into office, Brazil’s wealthy turned to the judiciary, which charged him with corruption and jailed him in the southern city of Curitiba.

After months of struggle in the courts and with demonstrations of tens of thousands supporting Lula in the streets, he was ruled off the ballot on Aug. 31. A subsequent legal decision has even prevented the PT from using Lula’s name or image on the electoral material for their substitute candidate.

The substitute, Fernando Haddad, a former mayor of Sao Paulo, has been campaigning for the electoral coalition called “The People Happy Again.” The coalition is made up of the PT, the Communist Party of Brazil and the small Party of Social Order. Haddad will now head the ballot.

Compared to Lula, who is known by everyone in Brazil, Haddad is little known nationally. In polls Lula led with 39 percent support. Haddad gets 8 percent, which climbs to 14 percent if the people polled know that Lula supports him — which is why there is a ruling to prevent educating voters about that.

Some other leftist parties have not joined the coalition and are running their own candidates, although most support Lula’s right to run for office. One candidate is Guilherme Boulos, a leader of the Homeless Workers’ Movement who is running on the Socialism and Liberty Party (PSOL) ticket.

Three center and rightist candidates each poll 8 to 10 percent. The most right-wing candidate, Jair Bolsonaro, was second to Lula in polls, with about 22 percent. With Lula absent, Bolsonaro led the polls for the first-round vote.

A second dramatic political event occurred on Sept. 6. While campaigning in the city of Juiz de Fora in the state of Minas Gerais, Bolsonaro was stabbed in the abdomen and needed an operation to repair severed intestines. He is expected to survive the attack, but may not be able to campaign.

Bolsonaro is a former captain in the Brazilian army, who praises the military dictatorship that ran the country from 1964 to 1985. He is openly and viciously misogynist, anti-Black, anti-Indigenous and anti-LGBTQ and calls for even more police murders of Brazil’s poor and Black population. Brazil has the second-largest number of people of African descent, after the West African country of Nigeria.

One example gives an idea of how vicious Bolsonaro can be. When he voted in the National Assembly to depose Rousseff in 2016, he dedicated his vote to the military officer who ran the prison where Rousseff was tortured for three years. She had been imprisoned for combating the military dictatorship that ruled Brazil for more than two decades.

While Bolsonaro now leads polls that, since the attack, show he has gained some “sympathy” votes, there are questions whether he will hold on to them. If no candidate gets more than 50 percent, a second round between the two leaders of the first round will be held on Oct. 28.

With the class struggle as sharp as it seems to be now in Brazil, formal election results do not necessarily determine which ruling-class grouping takes over the government, let alone which controls state power.

This was brought home earlier this year when Brazilian political activist Marielle Franco, 38, died in downtown Rio de Janeiro on March 14 in what officials have deemed a political assassination. Franco was a bisexual woman of African descent born in a favela and a member of PSOL elected to the city government.

A third dramatic event was the Sept. 2 fire that burned the National Museum in Rio de Janeiro to the ground, destroying valuable and irreplaceable collections. This event was especially tragic since it involved the loss of history and languages relating to the many different Indigenous nations and peoples who inhabited Brazil when it was first seized by Portuguese colonialists 500 years ago.

The first grievous loss was the extermination of these peoples and the elimination of their language and culture. The second is the loss of even the history of their existence.

Though this event may seem distant from the election struggle, a Sept. 5 article in vermelho.org.br by writer and former minister of Science and Technology, Roberto Amaral, explains: “The destruction of the National Museum was no accident, but an intentional crime: thought out, calculated, planned, executed with precision. It is a holocaust ordered by neoliberalism” — that is, by the privatization of state property and opening the country to foreign investment.

Amaral blames the fire on the coup regime’s so-called “austerity policy” that froze public funds and attacked education, science, research and culture. “According to the Budget Consultancy of the Chamber of Deputies, the amounts received by the National Museum fell from 979 million reais in 2013 to 98 million reais in 2018.” That is from approximately $450 million to $20 million, given the different exchange rates in those years.