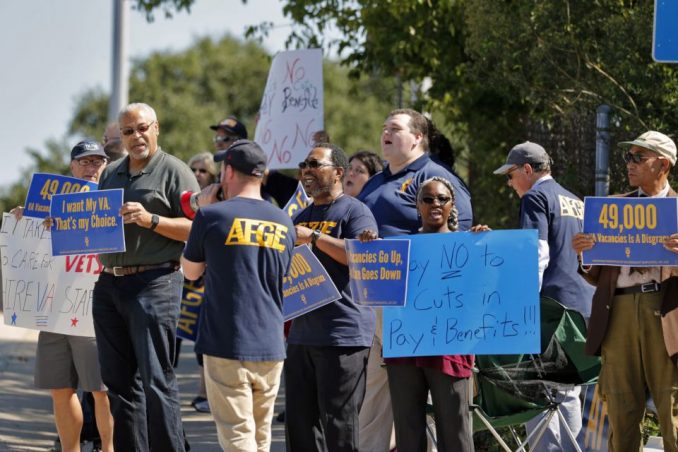 President Donald Trump announced on Aug. 30 that he plans to freeze a scheduled 2.1 percent pay raise as well as an annual increase based on region, known as the locality pay increase, for federal workers in 2019. Military service people have been exempted from this decision.

This announcement is another and tho­roughly predictable attack against U.S. workers. Considering the overrepresentation of Black people in the federal workforce and the reduced gender pay gap for federal workers in comparison to the private sector, Trump’s pay freeze has severe inter­­sectional outcomes in which women of color will be disproportionately impacted.

Trump’s pay freeze is being referred to as an austerity measure. Trump and conservative economists have rationalized these cuts by suggesting they will save as much as $25 billion. Yet in many ways austerity does not adequately describe the cause and effect of Trump’s pay freeze. Central to neoliberal economic policies, austerity involves government cuts in response to increased debt.

Neoliberalism is a complicated term that conjures notions of modernized liberal social policies. In fact, it is merely a reprise of early 20th-century laissez-faire capitalism, a modernization of Adam Smith’s thoughts in which the liberal economic rights of individuals are awarded to corporate powers. In this process, political economic power is transferred to corporations in lieu of public control.

Most progressive and liberal economists and historians chart the 1970s as the time of the rise of neoliberal policies. However, Black radical and autoworker James Boggs had chronicled the impacts of neoliberalization, which he called automation, in the 1950s. It was then that postwar suburbanization and expansion of the white American middle class were produced through massive layoffs of Black people. The last hired in wartime industry became the first fired, and the effects of these measures became known as the “urban crisis.” Neoliberalism can be seen as the moment the general public began to experience the urban crisis.

Amidst the neoliberal turn of the U.S. political economy, federal employment has been a haven for many workers of color and women. People of color are overrepresented in federal employment in comparison to the general population. In 2016 the Office of Personnel Management reported that whites made up about three-quarters of the U.S. population but only 63 percent of the federal workforce with people of color accounting for nearly 37 percent.

Half of those workers of color are Black workers. Though Black people account for 13 percent, nearly one-fifth of the U.S. population, 18 percent of the federal workforce is Black. The average federal worker makes $90,000 annually.

The one part of government work that remains overly white and male is defense contracting and other military-related activity. Despite Trump’s isolationist rhetoric, the military-industrial complex has experienced a windfall of profits since his inauguration that continues to expand.

In the wake of the Supreme Court’s recent Janus decision, Trump’s pay freeze is another attack on workers and organized labor. It has disproportionate impact on the most oppressed while further enriching the already powerful.