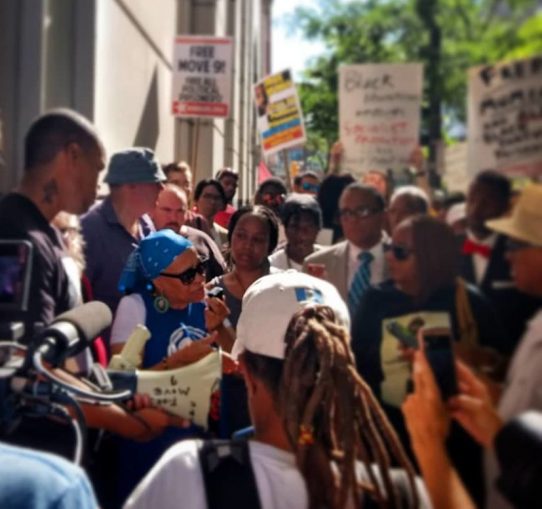 Speaking above is Pam Africa of International Concerned Family and Friends of Mumia Abu-Jamal and the MOVE organization. Activists from as far as France and Senegal joined the Aug. 30 rally.

More than 100 activists assembled outside the Criminal Justice Center in Philadelphia on Aug. 30 to demand the immediate release of Mumia Abu-Jamal, an innocent man who has been held captive by the U.S. carceral state for 37 years. While demonstrators rallied on the streets below, other supporters managed to pack the courtroom despite a purposeful attempt on the part of the courthouse cops to block their entry.

Pam Africa of International Concerned Family and Friends of Mumia Abu-Jamal and others have confirmed that when trying to pass through the security checkpoint, the guards lied to them and said that Mumia’s hearing had been postponed. This is now a common ploy that Philadelphia police use to turn Mumia supporters away from court. Africa demanded to speak to a lieutenant, who repeated the lie that the judge had rescheduled Mumia’s hearing.

Undeterred, activists entered the courtroom only to find that Maureen Faulkner has already been escorted inside and seated. Faulkner, the widow of slain police officer Daniel Faulkner, has openly called for Mumia’s murder for allegedly killing her spouse — although mountains of evidence show that Mumia was framed. She was joined by the head of the Fraternal Order of Police, John McNesby, who last year referred to Black people in Philadelphia as “a pack of wild animals” at a public press conference.

The police attempt to suppress the movement is common at these hearings and has always failed to discourage Mumia’s friends and allies. But it does indicate just how hopelessly corrupt the entire U.S. justice system is — that the very courtroom appears to be controlled by the forces conspiring to keep Mumia Abu-Jamal locked up.

The International Concerned Family and Friends of Mumia Abu-Jamal and members of the MOVE Organization were joined by Workers World Party members from Philadelphia, New York and Durham, N.C., as well as activists from as far away as France and Senegal. Among the crowd were figures like Keith Cook, district director of the North Carolina NAACP State Conference and Abu-Jamal’s brother; Mireille Fanon-Mendès-France, founder of the Frantz Fanon Foundation and daughter of revolutionary philosopher Frantz Fanon; human rights activist Roger Wareham of the December 12th Movement; Claude Guillaumaud-Pujol of the Paris-based organization Libérons Mumia; and Rachel Wolkenstein, activist and Mumia’s former attorney.

The day prior to the hearing, these freedom fighters participated in a press conference that included Ant Smith of Philly for REAL Justice; Pam Africa, the MOVE Organization’s minister of confrontation; Marc Lamont Hill, CNN contributor and owner of Uncle Bobbie’s Coffee & Books in Philadelphia; former Drexel professor George Ciccariello-Maher; and poet and organizer Sister Empress Phile Chionesu, a longtime ally of Mumia and MOVE and director of the Million Woman March. A full video of the press conference can be found at tinyurl.com/ybcnhshv.

Pledges of renewed solidarity with Mumia poured in from around the world in the days leading up to the Aug. 30 hearing. German Bundestag (federal parliament) member Zaklin Nastic wrote a letter directly to Mumia, pledging that “International Solidarity is not merely a hollow phrase; it is practical, emphatic, and brought to life by the enduring support of local support movements.”

DA Castille is a bloodthirsty proponent of the death penalty and has spent his career trying to implement policies to fast-track executions, particularly for people accused of killing cops.

As a Supreme Court justice, Castille denied the appeals of men like Terrance Williams, whom Castille prosecuted as DA and whose execution he authorized. Years later, Castille had left the DA’s office and been elected state justice when Williams’ appeal reached the court. Williams’ lawyers demanded Castille recuse himself, but he refused.

This conduct was too extraordinarily unjust even for the bourgeois capitalist legal system. In the 2016 case Williams v. Pennsylvania, the U.S. Supreme Court ruled against Castille and in favor of Williams. The ruling set a precedent that judges should recuse themselves in capital cases if asked to hear an appeal to a conviction that they themselves had prosecuted.

Mumia’s lawyers are gathering similar evidence of Castille’s judicial and prosecutorial misconduct in his case. The search began when the court granted discovery more than a year ago, but DA Larry Krasner has delayed the turnover of files that may contain the proof that Castille was personally and actively following death penalty cases like Mumia’s. Krasner’s office claims they still have not reviewed more than 200 boxes of files, while some crates of documents are still, purportedly, missing.

Among the files turned over just last week was a 1988 letter that Castille sent to a state senator who was known as a virulent advocate of the death penalty, referencing Mumia and eight other capital defendants. A former assistant district attorney swore that Castille contacted her in 1990, urging the speedy execution of several death row inmates — but Krasner’s office claims that this memo has been lost.

Despite a slick and well-financed campaign that painted him as a progressive figure who would end the death penalty in Philadelphia, Krasner is no different than any other prosecutor. Upon his election in 2017, he actually appointed Castille to his transition team — after the disgraced former justice had already been found by the U.S. Supreme Court to have unjustly sent convicts to their deaths.

Krasner’s office continues to pressure the accused into accepting plea bargains by threatening to seek the death penalty if they opt to go to trial. And, following in the footsteps of his predecessors Ed Rendell, Seth Williams and Castille, Krasner is colluding with the Fraternal Order of Police to kill Mumia Abu-Jamal by keeping him in prison for the rest of his life.