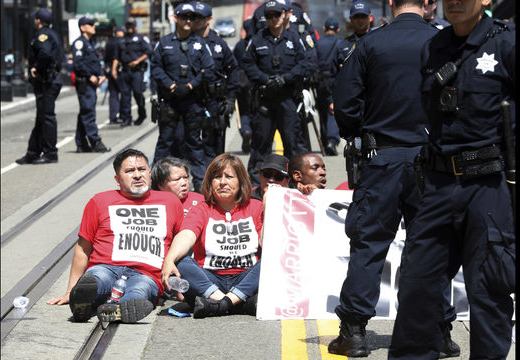 The official “Labor Day” has now passed in the U.S.

But guess what? Today is still “labor day” – as is every day.

Because against the shark-teeth of capitalism, workers are still in the fight of our lives for wages we can live and thrive on, for health benefits and housing we can afford, for jobs that don’t break us down but give us satisfaction and respect.

A militant, independent, rank-and-file labor movement in the U.S. is mandatory to wage this struggle successfully. It’s crucial that workers not fall for either the bait or the crumbs thrown out by bosses or bourgeois politicians.

For instance, the “official” Labor Day in September: Did you know that the federal government put that in place in 1894 to defang a rising, militant workers’ movement that celebrated its “labor day” in May with rebellions and strikes?

May 1 was declared International Workers’ Day in 1889 by socialists in memory of the Haymarket Martyrs, who fought for an eight-hour work day. By 1894 millions were unemployed and in the streets after a U.S. capitalist economic crash. By May of that year, hundreds of railroad workers of the Pullman company and the American Railroad Union struck, closing down all rail traffic passing through key Midwest links. President Grover Cleveland called out U.S. troops to put down the strike with bloody repression — and then he pushed a proposal through Congress for an “officially recognized” Labor Day.

What a reminder that a militant workers’ struggle — the struggle of labor against capital — will never win if we wait for “official recognition” before we make demands or take action.

In Boston this Labor Day, the streets were taken over by hundreds of workers who are not waiting.

Low-wage Marriott hotel workers advanced into the heart of the financial district at Prudential Center on Sept. 4. This was no symbolic march.

Shouting “¡Si se puede!” “Yes, we can!” and “What kind of power? Union power!” the property maintenance workers, doormen, window cleaners and food service workers flooded the streets. They sat down to block traffic, and at the Sheraton Boston they announced a strike authorization vote. The workers are represented by Local 26, Unite Here.

In Labor Day coast-to-coast militancy, almost a thousand Marriott hotel workers also demonstrated in San Francisco for living wages. Seventy-five workers were arrested. An overall demand was “One job should be enough!”

Despite the vicious, continuing pushback and repression from bosses, workers are surging again. Today, the struggle may be for “enough.”

Workers create everything. Some day, on the road to socialism, the cry from workers will be for everything.