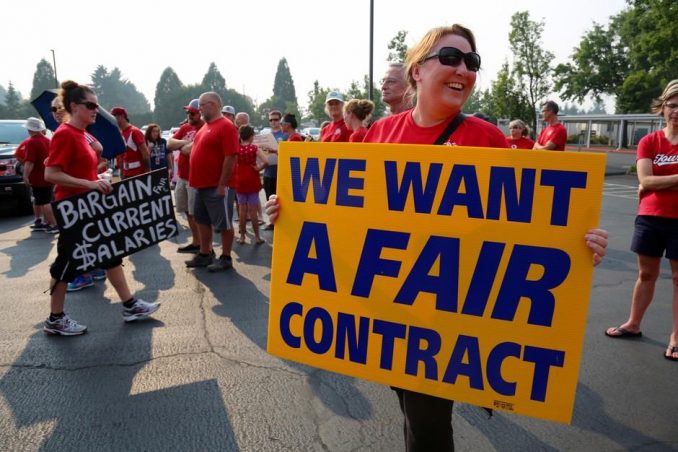 Aug. 25 — Teachers throughout southwest Washington state have overwhelming­ly approved potential strikes and work stop­pages if their demands for better pay and new contracts aren’t met before their scheduled return to work at the end of August.

Beginning Aug. 17, a strike vote by teachers in Ridgefield won by 97.8 percent. Four days later, Washougal and Hockinson voted to strike, followed by a near-unanimous vote in Battle Ground. On Aug. 23, teachers in Evergreen school district, Clark County’s largest, approved a strike. Camas will hold a vote on Aug. 27, while teachers in Woodland have approved a new contract with a 23 percent raise.

On Aug. 20, teachers in Vancouver, Wash., directly across the Columbia River from Portland (not to be confused with Vancouver, Canada), also approved a possible work stoppage. According to Vancouver’s newspaper, The Columbian, “The union and district are at odds over a few items other than teacher pay, such as class sizes, case loads and staffing in the special education program, and a guaranteed voice in the curriculum adoption process.” (Aug. 17)

As of this writing, teachers have voted to authorize strikes in at least 10 of the state’s 294 school districts. The strike votes come in a year that has already seen large teacher strikes in several states protesting the chronic neglect of the public education system — from low pay to overcrowded, dilapidated schools contaminated with lead and lacking heat. According to the Aug. 17 Columbian, “The union and district are at odds over a few items other than teacher pay, such as class sizes, case loads and staffing in the special education program, and a guaranteed voice in the curriculum adoption process.”

The Washington state Supreme Court in its 2012 McCleary decision found that the state was failing to provide basic education and ordered it to spend billions more dollars on schools. Four years later the court found the state still was not in compliance with its decision. Teachers remain frustrated with the same problems of stagnant pay and crumbling schools that led to the court decision in the first place.

In a state frequently described as liberal or progressive, Washington’s education system and tax structure tilt decidedly against working people and in favor of the wealthiest few. With no state income tax and high, regressive sales taxes that disproportionately affect low-income people, Washington’s tax structure has been ranked as the least fair in the country. (time.com, Jan. 14, 2015)

Billionaires like Bill Gates and Jeff Bezos, along with their companies Microsoft and Amazon, call the state home, as do corporate titans like Boeing and Starbucks. Seattle shimmers with new skyscrapers filled with luxury condos, posh hotels and vast corporate offices. But amidst the flashiness of its largest city and stunning volcanic vistas, Washington faces serious problems like inadequate public education, an opioid epidemic and a deep affordable-housing and homelessness crisis.

Seattle attempted to ameliorate its housing crisis by taxing large companies like Amazon to pay for affordable housing. But once the large corporations came out strongly against it, the City Council quickly folded. Amazon constantly threatens to leave Seattle, even pitting cities against each other for a chance to win its second corporate headquarters — all as a way to bully the city and state into getting what it wants. Boeing also received special deals from the state to incentivize it to stay, after it threatened to move to a lower-wage, lower-regulation state.

Resources exist to fix Washington’s schools and provide everyone with housing and health care — which are crucial to stop the opioid epidemic. But those resources aren’t allocated for the benefit of the public.

A small capitalist class exercises control over the economy. What could be used to provide a decent education and home for all instead goes to stock buybacks that benefit investors or extravagant yachts for the super-rich.

The state’s endless pleading with the likes of Amazon and Boeing to stay and invest in Washington clearly hasn’t benefited the children and teachers. These corporations will take every handout they can get until they decide to go somewhere more exploitable. Submitting to their control can never deliver a good standard of living for the working-class majority, since their very existence depends on the exploited class of workers.

But the teachers have had enough, emboldened by a spate of strikes in other states that were able to win real gains — gains that cannot be achieved via endless negotiations and compromises with those in power.