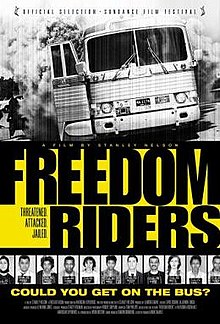 “Each generation out of relative obscurity must discover its mission, fulfill or betray it.”

Veteran human and civil rights activist Colia Clark “dropped the science” on her seasoned audience on Aug. 19 at the International Action Center here via her “missing pages from history review” of the documentary “Freedom Riders” by filmmaker Stanley Nelson. Pin-drop silence warmly greeted a number of her sharp, first-hand, knowledge-filled observations/experiences. Her unique analysis was a critical complement to this compelling film.

We learned that before Rosa Parks, there was Claudette Colvin, who had defiantly challenged racist seating arrangements on buses in Detroit. What began as a local issue later expanded to interstate travel on buses. Violence against the Freedom Riders was iconically captured in a photo of a Greyhound bus that had just been firebombed by racists in Anniston, Ala. Freedom Riders, some severely beaten by mobs, refused to be intimidated, thus encouraging many others, white and Black, to “take up the Cause.”

Faced with demonstrative state and local government resistance in the South to end Jim Crow practices in interstate travel, the John F. Kennedy administration, through its Justice Department, led by his brother Robert Kennedy, issued a nationwide ban on racist customs affecting interstate travel along with attendant sanctions. While racists fumed, Greyhound and Trailways had to sing a new tune.

The Montgomery Bus Boycott of the mid-1950s, sparked by the venerable Rosa Parks, had a number of leaders, including J.D. Nixon, the Rev. Martin Luther King Jr. and others equally priceless. They played vital roles in helping to end Jim Crow segregation laws that gripped the South in the post-Reconstruction period. White anti-racists, such as Viola Liuzzo and Anne Braden, would also play strategic roles in upsetting centuries-old practices. The brutal and senseless murder of Emmett Till earlier in 1955 also spurred Sister Rosa toward an act of defiance. Historic it was.

In a fitting acknowledgement of “Black August,” Orie Lumumba, a longtime defender of the MOVE 9, and Ramona Africa updated the audience about Sister Ramona Africa’s medical condition, made precarious because of “capitalist medicine’s” unceasing demand for payment and thus the need to cover present and future expenses! Stabilized for the moment, her condition can change in an instant. Financial support remains a critical element in her recovery. People who are “GoFundMe shy” can send remittances to MOVE/Ramona E. Africa, c/o MOVE Org., POB 19709, Philadelphia, PA 19143.