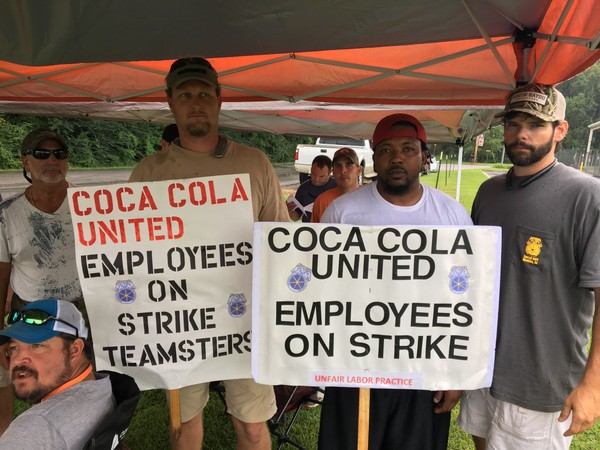 A multiracial force of 275 drivers, salespeople, merchandisers, clerks and mechanics went on strike against the Coca-Cola Bottling Company United on Aug. 9 in Robertsdale, Ala. Represented by Teamsters Local 991, workers raised handwritten signs protesting the bosses’ obscene demands to cut new hires’ pay by $6 to $8 an hour and raise insurance costs. They also cited unfair labor practices. Their contract expired July 15.

“When Coca-Cola United insisted on cutting wages and wouldn’t listen to us at the bargaining table, we felt we had no choice,” said union steward David Stephens. (al.com, Aug. 9) But even without a new contract, the workers resumed their jobs Aug. 20 because they didn’t want to hurt “good relationships with their customers.” As Stephens noted, “We care about the community, but Coca-Cola United doesn’t seem to.”

As the largest privately held bottler in North America, with estimated $2.2 billion in yearly sales, Coca-Cola United could well afford to offer a good contract. Jim Gookins, secretary-treasurer of Local 991, noted: “The wealth inequality in America is staggering, and Coca-Cola United is a prime example of how the one percent hoovers up money from the rest of us. … For a rich corporation to demand cuts to workers’ wages is a slap in the face to workers, their families, and our communities.” (teamsters.org, Aug. 20)

Coca-Cola United’s treatment of the workers falls flat, but union pushback and solidarity can change the equation.

New York construction workers took to the streets Aug. 22 to protest against Miami Dolphins’ owner Stephen Ross. He heads a billion-dollar real estate business, Related Companies, which is building the ritzy Hudson Yard development. Ross sued union workers in the Building and Construction Trades Council of Greater New York in early March, according to Crain’s, “in an effort to break the grip of the most powerful labor organizer and lobbying group in the city’s unionized construction industry.” (March 22) Ross claims the council bilked his company out of $100 million during the first phase of the $20 billion job. The Related company is seeking to complete the second half of the project with an open shop — non-union labor — which the workers vehemently oppose.

“Construction workers are risking arrest today to stand up against unscrupulous, anti-union developers like @RelatedCos who place workers in unsafe conditions and deny them the respect they deserve on the job,” tweeted the N.Y. Central Labor Council. Several protesters, wearing Dolphins-colored T-shirts that read “Step Down Steve,” were arrested outside National Football League headquarters on Park Avenue.

The protest accused Ross of condoning “racism, sexism and union busting” through his development business. Targeting Ross’s seat on the NFL’s so-called “social justice” committee was a clever way to draw attention to labor’s cause and show solidarity with unionized NFL players who choose before games to protest racist violence and police murders of Black and Brown people.

However, the executive orders were felt months before they were officially issued when the Department of Education threw out its contract with 3,900 AFGE members in March. Since May, other agencies, including the Social Security Administration and Department of Veterans Affairs, both of which have large numbers of Black and women workers, tried to comply. Cox urged all agencies “to restore all previously negotiated contracts and to bargain in good faith … as required under the law.”

The Coalition of Labor Union Women and the National Domestic Workers Alliance were joined by several unions protesting outside the Supreme Court on Aug. 22 against Trump nominee Brett Kavanaugh. His nomination “puts the freedom of all working people on the line,” said rally organizers, during a week of action pressuring legislators to oppose Kavanaugh. “Working peoples’ rights — from the ability to make choices that are right for our families, to our right to safe, dignified working conditions and the ability to collectively bargain for better benefits, including access to a full range of health care — will be jeopardized with Brett Kavanaugh on the Supreme Court bench.” (Union City newsletter, Metro Washington, D.C., AFL-CIO Council, Aug. 22)