A noise demo was called on Aug. 21 by the Industrial Workers of the World at Twin Towers Jail, located in downtown Los Angeles. The demonstration was to let the folks behind bars hear our solidarity with their struggle, to let them know that we hear their demands. 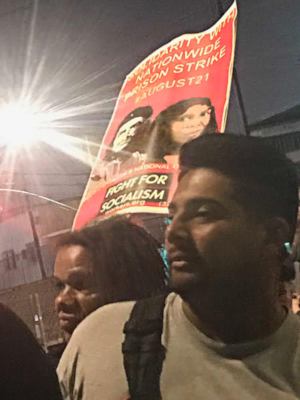 John Parker from Workers World Party Los Angeles spoke at the event, connecting the prison-industrial complex to the military-industrial complex. He exposed the role of fascist pigs as protectors of finance capital, through racist police terror at home and imperialist wars abroad.

In solidarity with the nationwide prisoner strike, a film screening of “Black August” was hosted by WWP at the Harriet Tubman Center for Social Justice on Aug. 23. The movie covers the last 14 months of the life of political prisoner George Jackson. The current strike started on Aug. 21 to commemorate the day Jackson was assassinated by San Quentin guards in 1971.

Before the screening started, solidarity statements were read from Palestinian political prisoners who have been targeted by Zionist Israel for fighting for their freedom as members of the Popular Front for the Liberation of Palestine. A recording was played of Mumia Abu-Jamal speaking on current updates regarding the Move 9. A statement of solidarity was read regarding Mumia’s court date on Aug. 30. Also read were a eulogy to George Jackson, written by Huey P. Newton, co-founder of the Black Panther Party for Self Defense, and an introduction to the film. An open discussion followed.

Remember George Jackson! Solidarity with the Nationwide Prison Strike! Tear down the walls!