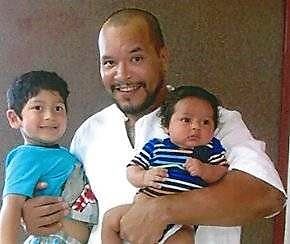 Nanon Williams, with grandsons Jason and Liam at the Ramsey Unit in Brazoria County, Texas.

Houston — A tremendous victory after a long struggle has been won by activist prisoners at the Ramsey Unit Prison in Brazoria County,Texas, when four prison guards were taken off the unit and indicted on felony charges. (Houston Chronicle, July 11) Prisoner-activists were responsible for exposing, challenging and publicizing the guards’ illegal and brutal treatment.

The victory came after prisoners Nanon Williams, Donsha Crump and Neil Giese, all Muslims, were repeatedly thrown into solitary, had phony disciplinary cases filed against them, lost visitation rights, lost telephone privileges, were removed from working on their education and faced gross discrimination.

But these men filed grievances, wrote to the media and contacted state legislators as well as higher state prison officials. They mobilized “outside” support by contacting activists and progressive media.

After months of struggle, four of the prison personnel were fired, indicted by a grand jury in early July and criminally charged.

Events at the Ramsey Unit that led to the criminal charges are typical of everyday actions by guards at the hundred-plus Texas prisons. The Texas Department of Criminal Justice was founded on racism and the convict lease program, when people of color were arbitrarily arrested and “leased” out for no pay to work for plantation, mine and factory owners.

Brutality, trumped-up charges, rapes, denial of medical treatment and anti-Muslim persecution are rampant and real every day of the year in  Texas jails.

A year of prisoner organizing

Problems at the Ramsey Unit began for the Muslim prisoners in 2017, almost a year ago, when a new warden, Virgil McMullen, was assigned to the prison after Hurricane Harvey devastated the Houston area in August. Prisoners at Ramsey, only 30 minutes from Houston and close to the Gulf of Mexico, had to be evacuated because of the severity of the storm.

After Warden McMullen read a Workers World eyewitness article about conditions created by the hurricane, he confronted prisoner Williams, who was quoted in the article. Williams had spoken with a WW reporter about the dangerous and treacherous conditions for evacuated prisoners, sleeping on gym floors along with rats, roaches, mosquitoes and snakes. (tinyurl.com/y844jgrt)

Williams, who, along with other Ramsey prisoners, communicates regularly with a Workers World reporter about prison conditions, recounted the warden’s threats, including that McMullen told Williams “not to let McMullen’s name ever come out of his mouth again.”

After this, the harassment of the Muslim prisoners began, with denial of their right to wear kufis (religious Islamic headwear), interference with their services and singling them out for “beard infractions.”

Muslims were given false charges and assigned to work in the fields. A federal court had already ruled in 2014 that Texas prisons were in violation of the rights of Muslim prisoners. Yet when grievances were filed by Muslim prisoners during this year of struggle, all appeals were denied.

In December 2017, Williams and three other Muslims were thrown into solitary confinement, though they were never given a disciplinary case. Williams was put in a cell with no light, no heat, no water and no bedding on a solid steel bunk. He spent over a week shivering on the bunk, with no clothes besides boxer shorts, barely able to write letters in the dark to his family, friends and lawyer. The prisoners finally filed grievances and were then released.

One week later, Warden McMullen came into the craft shop where Williams was working. (Williams is the only Black prisoner to be given craft privileges.) The warden threatened him, telling him to quit filing grievances and to quit mentioning his name on phone calls. Williams replied that he had the right to do both.

Williams was thrown into solitary again and charged the next day with having contraband in his tool box. Williams had receipts for the “contraband” syringes he’d used for years in the craft shop for solder, paint, graphite and oil. He had purchased hundreds of these from approved vendors, with receipts for all.

Nevertheless, he was convicted at a disciplinary hearing despite having these receipts. He lost rank, visitation, phone, recreation, commissary and was kicked out of his graduate school classes and the craft shop.

These false disciplinary charges were broken when prisoners got hold of an email written by Capt. Reginald Gilbert. In it, Gilbert ordered all guards to write up mandatory two disciplinary cases per day, even specifying which two rules were to be marked as violated.

When this reporter received a copy of that email, it was given to Texas Sen. John Whitmire, who chairs the powerful Texas Senate’s Criminal Justice Committee. Then, in a May 10 Houston Chronicle article, reporter Keri Blakinger exposed the scam of a quota system that required guards to write up prisoners for nonexistent infractions. Whitmire was quoted as saying: “Every time I think I have seen everything, now I see this! We don’t condone a quota for speeding tickets, why would we have quotas for prison disciplinary cases?” (tinyurl.com/yb648gwu)

Prison spokespeople repeated day-after-day that an anonymous prisoner had revealed the email from Capt. Gilbert and that the practice was an isolated incident.

But the release of the email was not anonymous. Williams and Crump, both African-Americans, had circulated the email throughout the prison and throughout the “free world,” along with their parents, activists and friends.

Prisoner Giese, who is white and a Muslim, was considered by racist prison guards to be a “traitor to his race,” not only for exercising his religious beliefs, but also for using the grievance system in protest. He was framed up for possessing two screwdrivers, which had been planted in his cell, resulting in Giese receiving the first disciplinary charge he has had in his 20-plus years in prison.

Giese’s mother, Sherry Templin, had written to every Texas prison official, including regional directors and their ombudsman, as well as state legislators and the media, for months and months. Finally, the national news media picked up her activist news campaign. With coverage by the Associated Press and other beyond-the-region media, this incident of framing prisoners was ended.

Call for struggle against incarceration, deportations

While four prison employees are now facing charges, the struggle is not over. Warden McMullen was not fired, but simply sent to a smaller prison as a warden, and Capt. Gilbert was simply demoted.

Nanon Williams wrote to Workers World: “Even though cases have been expunged from inmates’ records, it won’t change the fact that some prisoners were denied parole during the months that bogus cases were on their records, some were placed in solitary for weeks and months like I was, and some had phone, visitation, education, commissary, recreation and other hard-earned privileges taken away. No one is considering the trauma that may have had some prisoners lose bonds with family, get divorces, suffer from depression that could have led to suicide.

“During this time, Warden McMullen and others attempted to take credit for cleaning up a corrupt administration, when they were part of it. Other things are being ignored, like the murder of Kenneth Johnson that occurred under McMullen’s watch. No one is addressing other bogus cases written or ordered, not only by McMullen and Major Jackson and the lieutenants who enforced these [recent] case quotas. The real trauma and the impact of all these intentional acts will keep on coming.

“Fortunately, under the watchful eye of Workers World and activists on the frontlines, this is now being exposed. Mass incarceration as well as the brutality of separating families, the deportations and the crimes at detention centers, where people profit from the suffering of migrants and refugees, will be exposed as well.”

Nanon Williams was arrested and sentenced to death when he was 17. He was taken off death row in 2005 after the Supreme Court ruled that juveniles could not be sentenced to death. Houston Police Crime Lab “experts” testified that Williams’ gun was used to kill a young man. When Williams was finally able to hire a ballistic expert to prove it was not his gun, the cop who gave false testimony said he “must have made a mistake.” Williams is still in jail after 27 years.

If it had not been for the courage and guts of prisoners Williams, Crump and Giese, these recent prison-system abuses in Texas would never have been exposed, nor the prison guards fired, indicted and charged with crimes.

Activists have been organizing this year to commemorate and support Black August — the anniversary of previous prison resistance and uprisings from California to New York, and the current monthlong prisoner-initiated National Prison Strike from Aug. 21 to Sept. 9.

The prison support movement emphasizes the crucial need for support for every prisoner in the U.S., every month and every year. Because the real crime is the entire U.S. “justice system” that unjustly incarcerates the poor and the nationally oppressed while the rich literally get away with murder.

Gloria Rubac was an organizer of the Prisoner Solidarity Committee in Texas during the 1970s, communicating with prisoners throughout the state. At the historic Ruiz v. Estelle class-action case in 1978 in Houston, the PSC brought people to protest outside and pack the federal courtroom inside. Through that civil rights challenge, the Texas prison system was eventually declared unconstitutional. Since 1995, Rubac has been a leader of the Texas Death Penalty Abolition Movement and is today a leader of Houston FIRE (Fight for Im/migrants and Refugees Everywhere).