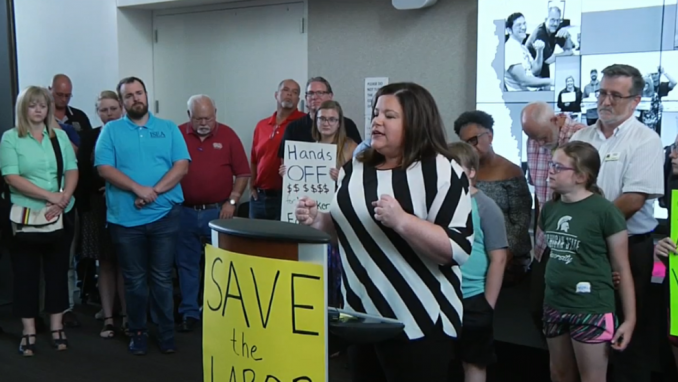 Iowa City, Iowa, Aug. 13 — Iowa workers are fighting to save the University of Iowa’s Labor Center from being closed by administrators in the wake of continuing attacks on the working class.

University administrators announced they are defunding the Labor Center along with six other UI centers, forcing this invaluable institution to close its doors within the year. The announcement was made prior to discussion with members of the Labor Center. If administrators have their way, the center’s closing will have devastating consequences for all Iowa workers.

The Labor Center, established in 1951, has since provided direct education annually for over 2,500 workers across the Hawkeye State. To quote a July 12 press release from the Iowa City-based Center for Worker Justice of Eastern Iowa, the center is “the only unit in the entire state university system that specializes in research and education for and about Iowa workers.”

Iowa is notorious for its “right-to-work” laws. Its government has been doubling down on anti-worker legislation. Statewide budget cuts by the Republican-controlled state government have devastated social services and been reaching colleges and university campuses. The center’s closing would be symbolic of UI leaders acting as guardians of the ruling class.

The university’s decision comes at a time of “spiraling inequality, when the combination of stagnant incomes and rising tuition are putting a college education increasingly out of reach,” according to UI Professor Colin Gordon. (tinyurl.com/yd46x668)

Professors, students, union members, workers, faith-based groups and community activists launched the “Save Our Labor Center” campaign to put pressure on administrators to keep the center open. SOLC organizers argue that the decision to close the center is not about “state funding cuts,” noting that the center’s 2018 General Education Fund allocation is “less than the UI president’s annual salary.”

According to a testimonial by Davenport native Rodney Blackwell, a member of Communications Workers Local 7110: “Many Iowans work full time. They don’t have the time to find out about all the laws. That’s why the labor center is important — to educate the few, to educate the masses.”

SOLC public hearings will be hosted across the state in Des Moines (Aug. 14), Cedar Rapids (Aug. 16), Quad Cities (Aug. 22) and Sioux City (Aug. 28). More hearings and dates will be announced in the future.

As stated in an SOLC flyer promoting the Des Moines hearing: “Your participation is crucial. A critical mass of voices can turn the tide on this bad decision. Come take this historic opportunity to share your experience, and have your input become part of the public record.”

For more information, see the source of most of the SOLC quotes at saveourlaborcenter.com.