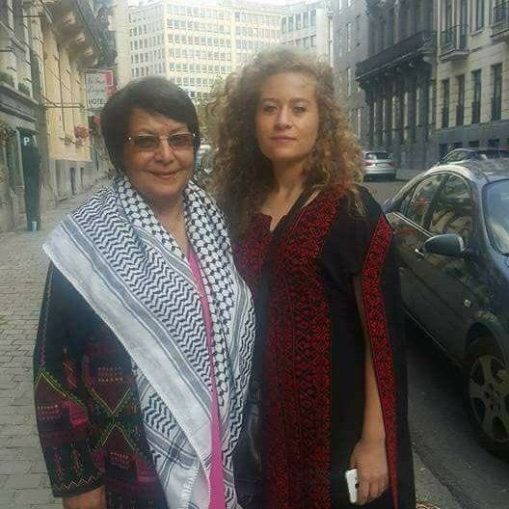 Young Palestinian freedom fighter Ahed Tamimi walked out of an Israeli prison on July 29 after spending eight months inside. Tamimi is known worldwide since a video, showing her confronting a heavily armed Israeli soldier, went viral at the end of last year.

The now 17-year-old spent the following week meeting with resistance leaders and holding news conferences to promote Palestinian freedom. Her mother, Nariman Tamimi, was also sentenced to prison with Ahed, was charged with “incitement” because she streamed the video and was released along with her daughter.

Many in Tamimi’s extended family in the village of Nabi Saleh, in the occupied West Bank, have been active in the resistance. Three killed by the occupation forces were Rushdi Tamimi, Mustafa Tamimi and Izz al-Din Tamimi — who was killed while Ahed was in prison. Another young Nabi Saleh resident named Saba Nidal Obeid was also killed by the Israeli forces.

Ahed Tamimi’s videotaped confrontation with the Israeli soldier came right after she learned, last December, that her cousin Mohammed Tamimi had received a near-lethal wound in the head from a rubber-coated steel bullet that penetrated his skull.

When asked about her role as a symbol of Palestinian resistance, Tamimi says she is “very proud that I can be a symbol of the Palestinian cause. I hope that I can live up to this title and that I’m able to spread the message of the Palestinian people, and the men and women in prison, to the whole world.” (All Ahed Tamimi quotes from Democracy Now! Aug. 6 are based on a rough transcript of translated comments.)

“I hope for the liberation of Palestine,” Tamimi adds when asked about her vision, “for the end of the occupation, for us to be able to go anywhere we want, anytime we want, without anyone preventing us from doing so.”

Asked about the difference between Jews and Zionism, Tamimi answered, “There is a huge difference between Judaism and Zionism. Judaism is a religion. You know, it’s just like Islam. It’s just like Christianity. But Zionism, that’s the occupation. That’s the killing. That’s what closes checkpoints. That’s what detains innocent people. That’s all Zionism that’s causing this conflict with Palestinians.”

The Israelis subjected Tamimi to four separate interrogations, from four to six hours each, where she had no lawyer. There were also no other women present, which is illegal under international law. She said she used her right to remain silent and answered no questions.

Tamimi’s message to people in the U.S. was to “thank everyone who supported me and stood with me. … I urge all the people, all the populations everywhere, to put pressure on their governments to support the Palestinian cause.”

Since her first words always call for solidarity with her sibling prisoners still behind bars, it is obvious she takes her role seriously. She explained “administrative detention,” which “is based on undisclosed files, so the detainee doesn’t know why they’re detained.” These prisoners continually get their sentences extended — one, Ali Jamal, spent seven consecutive years under administrative detention.

“There are over 350 children in prison,” she adds, “and three children who are under administrative detention.”

In an interview with Bassem Hamimi, Ahed’s father, by the German newspaper Junge Welt done before Ahed and her mother were released, Bassem spoke as a parent of freedom fighters:

“When people in the world see Ahed beat a soldier, they have no idea what he represents for her. They don’t know her story, they don’t know that she associates all the bad things that have happened to our family with this uniform. I’m proud of her. She is strong enough for her task of resisting the occupation. I think she did what she had to do.

“The overriding justification for her action is the occupation. The subordinate is that her cousin was badly injured on the head by a rubber bullet just before the video was shot, so that he fell to the ground and people thought he was dead.

“A short time later, the soldiers who had shot my nephew came over the wall of my house. They didn’t shoot Ahed because a camera was focused on her. There was no camera at Muhammed’s.

“I’ve been in custody nine times, Ahed’s aunt and her uncle were murdered. Her mother was arrested several times and she was shot so badly that she could not walk for two years. My eldest son was arrested three times and shot twice. They wanted to arrest one of my younger sons in 2015, and there is a well-known video in which Ahed bites an Israeli soldier.

“My house is under demolition order, and they have stormed it over 200 times and confiscated our electronic devices dozens of times. Imagine a soldier coming into your house and reminding you of all this through his presence. What would you do? Give him a rose?”

All quotes by Bassem Hamimi from Junge Welt, Aug. 3, were translated by Catalinotto.