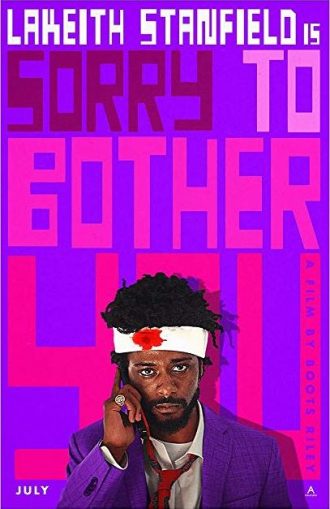 A surprising blockbuster film of this summer is “Sorry to Bother You” by Boots Riley of the Oakland-based rap group The Coup. Sharing its name with the concurrently written 2012 Coup album, “Sorry to Bother You” stars LaKeith Stanfield from “Get Out” and “Atlanta” as the protagonist, Cassius “Cash” Green, and Tessa Thompson from the motion picture “Dear White People” and “Selma” as Cash’s girlfriend Detroit.

Distinguishing itself from the horror film “Get Out” and the Afro-futurist “Black Panther,” “Sorry to ­Bother You” is the result of the revolutionary communist world­view of Riley, whose activism preceded his career as a cultural worker.

Some critics have described the film as an absurdist dark comedy. Absurdist works of art are defined by their focus on the inability of their main characters to find purpose in life. In this sense, the 1999 comedy “Office Space” is an absurdist film. “Sorry to Bother You” is best placed in the tradition of Black revolutionary cultural work, including the late Amiri Baraka’s Afro-surrealism, the late Aimé Césaire’s poetic knowledge and radical scholar Robin Kelley’s freedom dreaming.

“Sorry to Bother You” explores the life of Black youth in the postindustrial cities of the U.S. West. Like the vastly different films of a generation earlier, such as “Boyz n the Hood” and “Menace II Society,” or the historical drama “Fruitvale Station,” Riley’s film in many ways captures the particular contradictions of Black life in California.

There are no acts of extreme fratricidal violence, nor is Black life defined by exceptional moments of police terror, though these incidents exist in the film. Instead, the millenials Cash and Detroit struggle with the alienation of unemployment, underemployment and meaningless labor.

In the San Francisco Bay Area, the setting for “Sorry to Bother You,” the median income of white households commonly exceeds $110,000, while those of Black households barely exceed $40,000. Black wages there are on par with the national trend, while the income of a white family in the Bay Area is twice the national norm.

Simply put, as formerly incarcerated shipyard worker turned author Chester Himes showed in his 1945 novel, “If He Hollers Let Him Go,” the California Dream is a nightmare for African Americans. Such conditions for Black Californians have resulted in the re-gentrification of California’s coastal cities as Black workers and the Black poor are pushed further inland.

In “Sorry to Bother You,” Detroit works as a sign twirler. Initially jobless, Cash lives in his uncle Sergio’s garage. The home has gone into foreclosure, and unless Cash can earn enough money, he and his uncle will be evicted. Cash gets what he initially views as a break when his friend Salvador helps him land a job with the telemarketing agency RegalView. Initially stumped, Cash rises rapidly up the ranks when he is able to use his “white voice” — a racialized tone of affluence and carelessness.

Riley presents two responses to poverty and workers’ oppression: liberal individualism and multiracial workers’ solidarity. Cash ascends to the top level of the corporate structure by negotiating neo-slave labor deals and weapons sales for corporate giant WorryFree. Cash earns enough money to save his uncle’s house and purchase a foreign sports car and a high-priced loft.

Meanwhile, coworkers Diana, Salvador and Squeeze organize a wildcat strike to demand fair wages and benefits. Yet for their protest to truly succeed, the coalition needs Cash to participate.

In the climax of the film, “Sorry to Bother You” is revealed to be the sharpest Black manifesto to reach the screen in decades.

The son of Black Power activist and Civil Rights attorney Walter Riley, Boots was raised in a very politically active family. As a child, Riley moved from Chicago to Detroit and then to Oakland. As a teen in the mid-1980s, Riley joined the Progressive Labor Party and the International Committee Against Racism. Riley is a communist and former Teamster and United Parcel Service employee.

In many ways, Riley’s own geographical shifts appear in the political vision displayed in “Sorry to Bother You.” Reflecting the politics of the League of Black Revolutionary Workers and the Black Panther Party, Riley calls for a revolutionary movement of international workers’ solidarity where the most oppressed will lead.

Moreover, Riley abandons orthodox perceptions of class struggle and recognizes, just as the great C.L.R. James did, that all people whom capitalism seeks to exploit are members of the working class and class struggle takes many forms. Riley make this argument clear in his portrayal of Detroit’s visual art and the constant scrimmaging of Cash’s former high school football team.

As Cash reaches the pinnacle at RegalView, he is invited to a party by WorryFree CEO Steve Lift. At this party, Cash discovers that WorryFree is turning humans into beasts of burden — Equisapiens. Here Riley channels what the late Cedric Robinson called “the creation of the Negro” in his seminal text, “Black Marxism.”

At this point, Cash joins the resistance against WorryFree and RegalView. Uniting the workers, the football players and Equisapiens, the movement led by Cash, Detroit, Salvador and Squeeze gains better working conditions and unionization for RegalView employees. Yet, as the credits scene shows, this is just the beginning.

The film’s title, “Sorry to Bother You,” carries a dual meaning. As Riley has admitted, it not only reflects the disruptive practices of telemarketers, but the abandonment of false consciousness amongst workers. More than a reflection of the absurdities of Black life, “Sorry to Bother You” is a call for resistance.