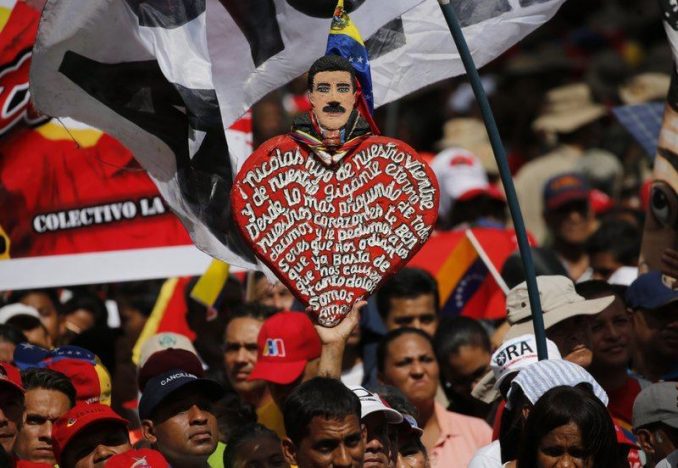 With massive demonstrations in Caracas and other cities on Aug. 6,   hundreds of thousands of Venezuelans showed their support for President Nicolás Maduro after the Aug. 4 attack on him by drones carrying explosives. The prosecutor’s office confirmed that it had established initial international connections with the six people arrested for the attempted assassination.

“We came to support the president after the terrorist act he experienced,” said Francisca Harvey, 53, as she walked up to a stage displaying a huge screen that read, “Maduro stays.” The ruling United Socialist Party of Venezuela (PSUV) called the mobilization, which was promoted through VTV, the state channel.

The march started from the center of Caracas, the Venezuelan capital, and arrived at the Miraflores presidential palace. Hundreds of thousands of people participated. Maduro was scheduled to welcome the marchers, but his appearance was cancelled.

From the stage, Diosdado Cabello, the president of the National Constituent Assembly, greeted the public: “The people are once again on the streets to reclaim their peace, to recover the tranquility of the country … to condemn violence in all its manifestations.”

Cabello, who is also vice president of the PSUV, warned that an assassination would unleash a wave of violence in the country: “Do not think, gentlemen of the bourgeoisie, of the opposition parties, that you would govern for a moment. Venezuela would burst into flames.”

Attorney General Tarek William Saab confirmed that two men had been arrested in the act of operating a second drone from a car; it crashed into a building. He did not identify them as he had promised to do on Aug. 5, nor did he refer to the other four people that the government announced it had captured. What he did disclose was that the initial international connections of the six arrestees had been established — and that the government had identified those who armed the explosive devices.

Saab further emphasized that the time had come to end the conspiracies. He said that “the charges under which those responsible could be convicted would be treason, attempted murder based on the level it was prevented, attempted murder and grievous bodily harm, throwing of explosive devices at public gatherings, terrorism, criminal association and financing of terrorism.”

Hours after the failed attack, Maduro pointed the finger at Colombian narco-President Juan Manuel Santos, claiming that he was behind the attack.  This accusation was rejected outright [by the government in] Bogotá, despite much evidence that — at the very least — incriminates the Colombian armed forces.

The Venezuelan government issued a statement which reasserts its  accusations and points again to Colombia. It says, “History has shown that the Colombian oligarchy’s obsession with interfering in Venezuelan affairs knows no bounds.” The text also states that Caracas holds the government in Bogotá responsible for any new aggression or attempt to promote any provocation against Venezuela from its territory or from the border areas.

Venezuela’s state television broadcast an image on Aug. 4 in which Maduro seemed disoriented after one of the drones exploded while he was giving a speech at the celebration of the 81st anniversary of the Bolivarian National Guard. With him were his spouse, Cilia Flores, and senior officials.

After the first explosion, Maduro was evacuated by his escorts.  After a second explosion, the broadcast showed dozens of soldiers running to help members of the public. The attack resulted in the wounding of seven officers.

This article appeared in lahaine.org on Aug. 7. Workers World staff translated it.