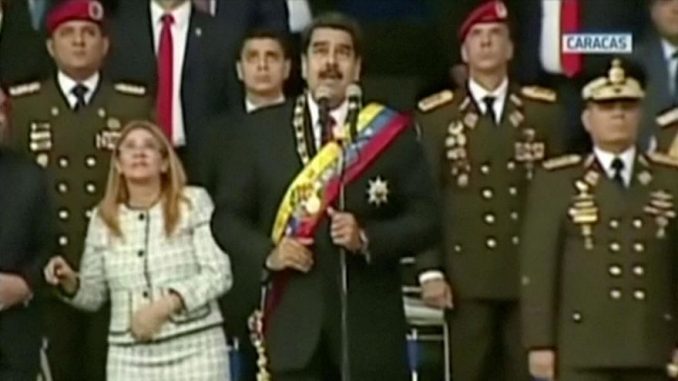 Aug. 7 — An assassination attempt on Aug. 5 on the life of Venezuelan President Nicolás Maduro prompted headlines in the U.S. media. While Maduro was speaking at an open-air ceremony to commemorate the national guard, two drones suddenly appeared near the speakers’ platform. A loud bang was heard as one of them exploded, injuring seven soldiers.

Venezuelan officials reported that the other drone spun out of control and crashed into the side of a nearby apartment building.

In an interview on state television the next day Néstor Reverol, the interior justice and peace minister, reported that the remote-controlled drones had each carried about two pounds of C-4 plastic explosives. He said the attempted assassination of the president was foiled, in part, by equipment designed to jam radio signals.

Six people were reported detained in connection with the attack, and at least two have been formally charged.

Media omits all mention of sanctions

All the U.S. media commentary on this vicious crime has focused on Venezuela’s increasing economic crisis and hyperinflation, giving support to the idea that Maduro was under attack because he is unpopular with his people. This is repeated ad nauseam in the corporate media here, but the facts show otherwise.

Maduro won a second term as president May 20, receiving 68 percent of the popular vote in an election declared modern, transparent and fair by all outside observers.

As WW correspondent Taryn Fivek reported from Caracas at the time of the election: “According to the corporate propaganda machine, Venezuela is suffering under the dictatorship of President Nicolás Maduro, a former bus driver whom they blame for the shortages, hyperinflated currency, crime rates, instability and all other ills of the country, and accuse of fraudulent elections. Nothing could be further from the truth.

“What the capitalist news won’t tell you is that the Venezuelan process is one of the most legitimate in the world. You could cut diamonds on the Venezuelan democratic process. After signing a register, a voter’s finger is stained with ink to make sure duplicate votes do not occur. Each voter casts their decision on a voting machine, which can be reviewed by the voter before placing it in a box next to the machine. More than 50 percent of machines are chosen for random audit, which means that the receipt box is opened and tallies compared to the computer readout.

“What results is a multiparty system run by the dominant PSUV (United Socialist Party of Venezuela). …

“The PSUV’s position is buttressed by the people of Venezuela themselves. The government reports having built more than 3 million new housing units for the poor. On first glance, they seem like the sort of apartment complexes that one might find in suburban Houston. Not exactly mansions, but many thousand times better than the housing the poor might have found themselves in before, with bare brick walls and crumbling thatched roofs.

“The price of the box is subsidized, and nearly free under the illegal market’s exchange rates. This is one way that the Bolivarian Revolution seeks to protect its people from sanctions, erratic exchange rates and hyperinflation.”

None of the coverage here on the recent assassination attempt has dealt with these strangling economic sanctions, imposed on Venezuela by the U.S. — in a clear effort to bring down the Bolivarian government. (The term “Bolivarian” refers to Venezuela’s efforts to free itself from U.S. domination, just as Simón Bolívar in the early 19th century fought to free Latin America from the grip of Spanish colonialism.) Nor do U.S. media report on the continuing assistance given by U.S. imperialism to the violent opposition within the country.

Sanctions, oil and the Petro

The Venezuelan economy for decades — starting long before the Bolivarian Revolution led by Hugo Chávez — has relied on oil sales to generate the currency for almost all its imports. Just a year ago, Washington sharply ramped up its sanctions, barring U.S. financial institutions from lending to Venezuela, freezing its funds in the international banking system and blocking payments to Venezuela through U.S.-controlled intermediaries.

This March, after the sanctions cut access to dollars, the Venezuelan government launched the Petro, a cryptocurrency based in shares of its vast reserves of oil, considered the largest in the world.

The Petro sparked international financial interest, and initial sales of the currency were reportedly worth 3.8 billion in U.S. dollars. In response, U.S. authorities barred U.S. citizens and firms from trading in Petros and, along with its European and Canadian allies, implemented a range of other sanctions.

Venezuela accused international financial institutions of then holding up the release of its state funds — money that had been earmarked for vital imports like food and medicine. As Maduro said, “The U.S. government is chasing every last dollar that we have in the world.”

McClatchy News reported on April 4: “The Trump administration is offering up lawyers and policy experts to Latin American governments to help them write new laws to make it easier to sanction Venezuelan officials and industries. …

“Publicly, U.S. officials are asking for governments to do what they can to support U.S. efforts. But privately they’re pressing harder, bringing ambassadors together in Washington or dispatching diplomats across the region, to encourage allies to reform their laws aimed at ousting Venezuelan President Nicolás Maduro.

“They’re urging Latin American leaders to join the United States, Canada and European allies who have worked together to starve the oil-dependent Caracas government of desperately needed cash.”

In an attempt to further paralyze the Venezuelan economy, more than 20 current and former Venezuelan government officials have been sanctioned, including Maduro, and the White House has barred U.S. banks from loaning Venezuela any money.

Switzerland, a supposedly neutral country that is a financial center for all the major imperialist banks, joined the U.S. in imposing sanctions on Venezuela, saying it was “seriously concerned” about “violations of individual freedom.”

The Swiss bankers have shown no such concern over Saudi Arabia’s domestic or external assaults on freedom, Israel’s genocidal treatment of Palestinians, the U.S. mass incarceration of Black and Brown people or the Trump administration’s ripping apart of im/migrant families.

Who’s behind the suffering in Venezuela today? Not the former bus driver and union leader now in the presidency. The culprits are the imperialist world’s billionaires, starting with the hotel and golf course mogul in the White House.