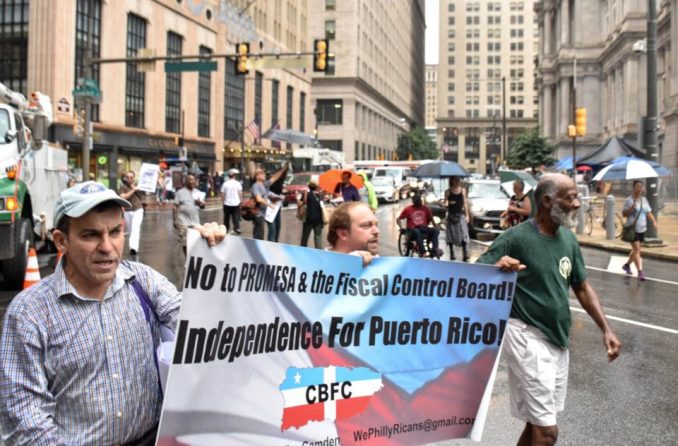 On July 25, 1898, U.S. Marines invaded Puerto Rico. The U.S. continues to occupy that nation 120 years later, against all international conventions that prohibit the possession of colonies.

Organized by the Philadelphia Camden Boricua Committee, members and allies of the Puerto Rican community rallied and marched in Center City on July 25 for 120 minutes to demand the end of the colonization of Puerto Rico. Marchers distributed informational fliers about the crimes the U.S. has committed against the Boricua people.

Demonstrators held signs and banners near the historic cracked Liberty Bell, as speakers took turns on a bullhorn to explain why independence for Puerto Rico is justified and necessary.

Participants then marched to Philadelphia City Hall, where Abolish ICE activists have been occupying a section of land for weeks, demanding an end to PARS (Preliminary Arraignment Reporting System), an agreement between the city and U.S. Immigration and Customs Enforcement to share a database used to identify “deportable” im/migrants.

At City Hall, immigrant rights activists and homeless people welcomed the marchers for Puerto Rican independence by blocking the busy street curb-to-curb. Together, everyone marched around City Hall during rush hour. In a further display of solidarity, marchers chanted “End PARS! Abolish ICE! End the occupation of Puerto Rico!”