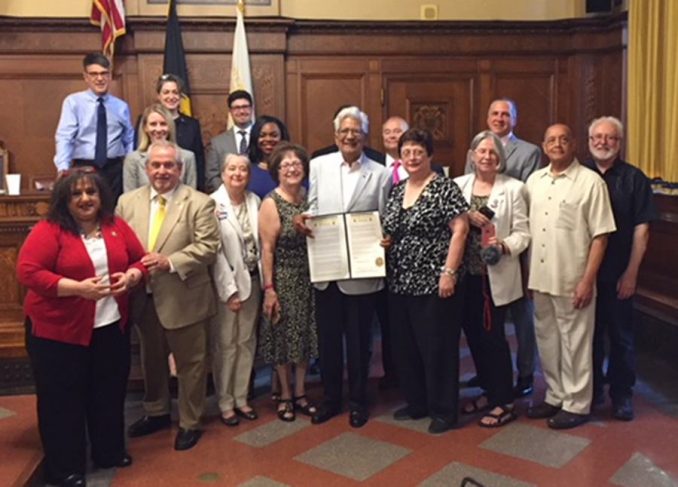 The Pittsburgh City Council took action to strongly support the sovereignty of the Cuban people on July 24.

A resolution in the form of a proclamation, sponsored by Councilmember Anthony Coghill and co-sponsored by the other eight council members, backed a renewed cooperative engagement with Cuba by the U.S., as well as restoration of the full diplomatic staff at the Cuban Embassy in Washington, D.C., and at the U.S. Embassy in Havana. Members of the initiating organization, Pittsburgh-Matanzas Sister City Partnership, and other supporters were present.

Pittsburgh’s resolution expresses the will of yet another U.S. community to end the U.S. commercial, financial and economic blockade of Cuba. It also sent a special message of solidarity to Cuba just two days before that country celebrated the 65th anniversary of the July 26, 1953, attack on the Moncada Barracks in Santiago de Cuba. That attack began the final stage of Cuba’s long struggle for independence and self-determination culminating in victory on Jan. 1, 1959.

The body of the resolution reviewed the history of exchanges and efforts between Pittsburgh and Cuba since 1998, including mayoral visits, trade delegations, memoranda of understandings between Penn State University and the University of Havana, and sporting exchanges. In July 2016, a spectacular youth “Boxing on the Bridge’”exhibition was held with participants from Cuba and Pittsburgh competing in the center of Pittsburgh’s Roberto Clemente Bridge spanning the Allegheny River.

The Pittsburgh resolution noted that only congressional action can unravel the web of many laws restricting trade and travel with Cuba. It calls for the repeal of the Helms-Burton and Torricelli acts and “urges Congress to pass the strategic pieces of legislation that would completely repeal the blockade and travel ban” — action that would benefit the people of both countries.

For instance, while 2.5 billion pounds of unsold meat and poultry are now warehoused in the U.S. and dairy farmers are going out of business (Wall Street Journal, July 22), the Pittsburgh resolution points out that there are commodities “that Cuba presently purchases from far away countries and wants to purchase from the U.S.” These economic pressures are fueling incremental but important amendments to the 2018 Farm Bill and Trade Sanctions Reform and Export Enhancement Act of 2000 to loosen some of the blockade’s financial grip.

A video recorded in the Pittsburgh City Council chambers is viewable on the National Network on Cuba’s Facebook page: http://bit.ly/2AmeGF9.